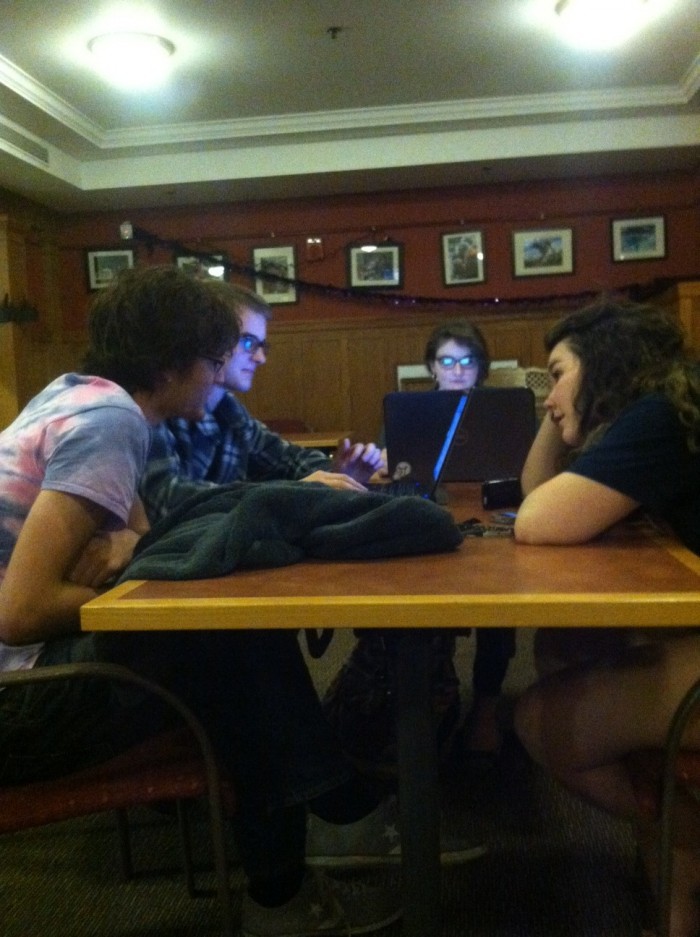 We’ve all done it. Pulled an all-nighter because of too much homework, an essay due the next morning, studying for a big exam, or insomnia just keeping you from dream land. And if you haven’t experienced it yet, you will before you graduate. It’s almost a guarantee.

It is, after all, a huge part of the college experience.

The all-nighter can go one of two ways though. It can be completely miserable or be a surprisingly entertaining experience. Having pulled one (almost two) myself last week, I happened to observe the more entertaining side.  I also noted the nine stages that occur, or rather can occur, during an all-nighter. These stages are even more obvious when the all-nighter is pulled in a group rather than alone.

When you first decide to that you are going to pull an all-nighter, you go into it with the goal of getting all of your work done. You plant yourself in a lounge, the library, Kingsbury, your room, or some other random spot on campus. With your laptop out, textbook open, and ear buds in, you start working on trying to accomplish your goal. This is the point of the all-nighter where you are at your most calm and focused.

If you are in a group, whether you are all working on the same thing or different things, now is when you are all the most quiet. The jokes haven’t started and the sleep deprivation hasn’t begun to affect the whole group and their actions and decisions.

That being said, you are not exactly working with machine-like efficiency either. You are still prone to the occasional Facebook check, “you-totes-got-to-see-this” YouTube video and Wikipedia digressions on the riveting study of the behavior of honey bees, which you will say you are looking at because of a class…. sure.

This stage of an all-nighter can run about two hours or 10pm until midnight.

Stage 2: Nicolas Cage is the best thing. Ever.

This stage can differ from person to person or group to group. This is the stage where the computers have switched from blackboard or the library site to YouTube and Facebook completely. While this is not an entirely new phenomenon, the YouTube videos and Facebook pages in question are slowly beginning to move to the questionable side of sanity and you’re working too hard at trying to figure out who that UNH Crushes post is about.

For us, this slow descent into madness began with a Facebook page whose primary source of content involved photoshopping Nicolas Cage’s face on various celebrities, movie posters and inanimate objects. In the end, we stumbled upon a video of Nicolas Cage’s face on the body of Miley Cyrus singing “Wrecking Ball” wallowing away in a corner of the internet.

What form this stage may take for you, we cannot say, but it will be something you will bring up for the rest of the night and look back up in shame and bewilderment the next day. There are just some things you don’t want to see Nick Cage’s face on. Like Miley Cyrus. You don’t want to see that. Trust me.

Stage 3: I Need To Get Work Done

Sometimes, sanity returns like a harsh, sobering slap in the face and you resolve to get your work done once again. Don’t worry, this is only temporary as Stage 4 is just around the corner. You’ll maybe write about fifty words, sometimes in the right order, before some inane distraction once again pulls you from your work. This is the distraction that will send you into the stage of prolonged hysteria which will sustain you throughout the night.

The shortest of all the stages, it is also the most potent one. Its 3am and sleep deprivation hits you all at once and floods the brain, turning that half-eaten pack of M&M’s in the corner of the room into the most hysterical thing you’ve ever seen.

The Youtube video which pushed us over the edge was the “Mom’s Spaghetti” remix of that Eminem classic, “Lose Yourself.” If you have not seen this video, make it your life’s priority. Any description of it cannot do it justice. While we may give it more credit than it’s due, just remember that we were exposed to it at 3 am. What followed was a spiral of increasingly absurd videos and songs. Highlights include Flight of the Conchords’ “Foux Du Fafa” and videos of American and British people failing to answer questions on basic trivia and current events such as “Where is South Korea?” and “Who was the first president of the United States?”.

From this point onwards, any ambition of getting work done is cast aside, at least for a few hours, and simply serves as a weak rationale for continuing to stay up.

If you are near a piano, run. Run fast and don’t look back. You will become convinced that you are a Beethoven and divine providence placed this piano in your path so you may dazzle the world with your electric fingers. The sad reality is that you will simply make nearby people believe that a particularly loud moose has stumbled onto campus and would greatly appreciate you sharing your DHOP pizza. Any nearby object that is not bolted down to the surface it is resting on will be thrown across the room and the most common response to any sentence is “your face.”

The debate over whether or not to go to bed becomes a divisive issue as well, but the constant sound of the piano in the corner is impeding your though process. Slowly but surely, however, as that 8 a.m. goes from being “ tomorrow”  to “ in a couple hours”, going to sleep starts to become less and less worth it. This thought process is verbalized as “I need to go to bed” to “Should I go to bed?” to “I’m not going to bed, am I?” to…

No matter where you live on campus or where you are spending your night of no sleep, you will question when the dining halls open and wish that time would speed ahead until that point. And just so you know, they all open at 7:15am.

Having been in the same room for about seven or eight hours, you are beginning to go a bit stir-crazy and the adrenaline of Stage 5 is beginning to wear out and sleep becomes very tempting. Your head is drooping a bit and the table in front of you seems like a great pillow. This, combined with the fact that you have become increasingly impulsive, propels you and your group outdoors, like a group of zombies but with even less direction.

In our case, the decision to brave the great outdoors was immediately regretted as we walked outside and remembered that we go to school in New Hampshire and it’s late October. Forty-five degrees and no sweaters is a pretty terrible idea. If you too choose to brave campus at 4:30am, bring warm clothes with you. And avoid the other strange people wandering campus that early in the morning.

Stage 8: I’m All Jacked Up On Red Bull

This is the final stage before you come crashing down and sleep-deprivation hysteria is at its most intense. You have the energy to do

everything and anything, but like that relative who’s always in between jobs and is “about to hit it big” with his brilliant business idea, none of it, sadly, will amount to anything. Combined with this is a frustration at having failed to get any significant amount of work done despite attempting to do so for nine hours. It’s a veritable cocktail of emotions; puberty condensed in sixty minutes.

You have class in two hours and the fruits of your labor have amounted to having determined that any word is slightly funnier when written in Comic Sans than in Times New Roman. That paper proposal you were supposed to write for that Civil War class has descended into a detailed discussion of Abraham Lincoln’s beard, your French essay is about the political differences between a man and his dog and concludes with “Omelette du Fromage”, your photojournalism Powerpoint presentation had deteriorated to selfies of you and your friends during Homecoming and you’re not even sure what your English homework has become.

In any case, the sun is rising, you have finally realized the severity of the situation and you are finally beginning to get your work done, albeit with an acute drop in quality since, after all, you stayed up all night, you freaking idiot.

As you slowly climb the HoCo stairs, the sun peaking up over New Quad and you having miraculously finished your assignments (sort of), you realize that despite it all, you had a lot of fun. You have been reduced to a giggling mess belting out “Set Fire To Rain” along with the Dining Hall PA system, scarfing down the heartiest breakfast you have ever had, you get ready to face the day ahead and realize you really, really don’t want to do that. You’re going to feel the consequences of the all-nighter for the rest of the day, it totally wasn’t worth it and you’re never going to pull one again. For a week. At least.  Probably.

Here are just a few quick tips to getting through your day following your all-nighter: