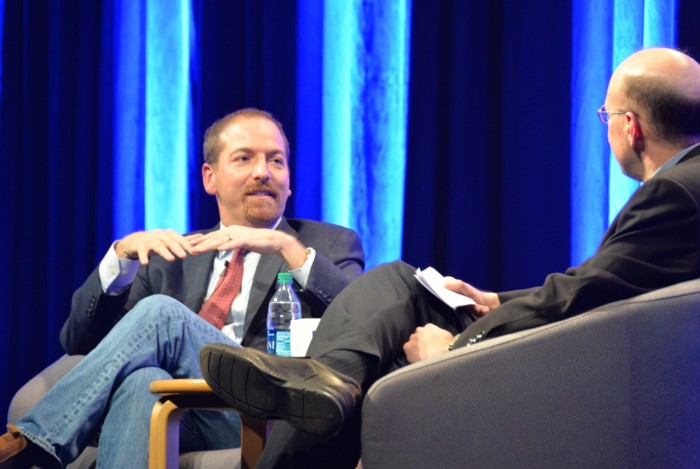 In addition to moderating NBC’s Meet the Press, the longest-running broadcast in television history, Todd serves as political director for NBC. Previously, he was NBC News’ chief White House Correspondent and host of MSNBC’s The Daily Rundown. Todd brought his expertise and perspective to candidly discuss the current state of politics with UNH students, UNH faculty, and local community members.

Todd began by sharing his view of the current presidential campaign, calling this election a “tumultuous” one. “There is a huge polarization, a divide,” Todd said, attributing the instability to the state of economic transition of the country. He compared this period in time with the shift from an agrarian to an industrial economy a century ago.

According to Todd, elections are times when the public evaluates whether the country is heading in the right direction or the wrong direction. Todd shared the common sentiment that the country is heading in the wrong direction. “There is a good chunk of people that feel as if the political system is broken,” he said. “And I’m here to tell you, they’re right.”

Todd noted that, in many instances, the federal government seems unable to effectively solve problems. “There is an inability to be nimble,” Todd asserted. He characterized the recent government scandals such as the failed launch of Healthcare.gov as scandals of “ineptitude” rather than outright maliciousness.

The discussion inevitably led to the current presidential election. Todd discussed the success of unconventional politicians such as Bernie Sanders and Donald Trump, emphasizing the idea that a successful politician gives the people someone to blame other than themselves.

As for the rest of the election, Todd joked, “The last thing I’m doing anymore is making any predictions,” although he did predict several more “weird twists and turns” arising in the remainder of the process.

Todd sat down with UNH political science professor Dante Scala, who is co-teaching a UNH MOOC about the history and effects of New Hampshire primaries in the next several months.

When questioned about the changing landscape of contemporary journalism, Todd wasn’t afraid to critique his own industry. He noted the tighter budgets and time constraints force new journalists to generate an inordinate amount of content. “The demands on these reporters are so great that I’d say some of the romance from campaign journalism has disappeared,” Todd said.

He noted the shifting relationship between the media and presidential candidates, the “celebrification” of the presidential campaign, the power of the viral moment, and the journalistic push for the “soundbite of the day.”

However, despite the election process’ faults, Todd commended it for bringing more people into the folds of political excitement. “I’m somebody who just wants more people to care about American politics,” Todd said. “We’re pretty good at democracy. I kinda wish that more people had more respect for it.”

As he pondered the outcome of the 2016 presidential election, Todd remained confident that the right candidate will be elected. “One thing about the American public,” Todd said, “is that, eventually, we always get it right.”