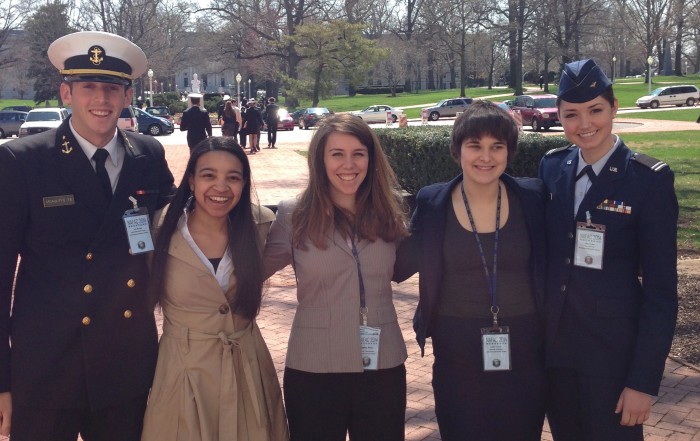 A few weeks ago, I was lucky enough to be approached by Colonel Ingram, one of my Political Science professors, about an available spot to attend NAFAC 2014, the Naval Academy Foreign Affairs Conference. The description of NAFAC depicts a conference that was “established in 1961” and “brings together more than 150 undergraduate students from the United States and over a dozen foreign countries every year for three days of critical discussions, lectures, informal exchanges, and social events.”  I found this to be a true characterization of the conference but one that does not describe the incredible experience I had in Annapolis.  Throughout my days at the conference from April 8th-10th I had intelligent, eye-opening discussions while meeting many inspiring and accomplished individuals.  One of my favorite parts of the conference was its commitment to retaining a small delegation; although students from a myriad of schools were represented, the fact that there were only about 150 students allowed for small, intimate roundtable discussions in a seminar-type setting.

The topic of NAFAC 2014 was “Human Security in the Information Age”.  My specific roundtable group consisted of about ten students from different schools as well as a few Naval Academy midshipmen, a moderator, and several professors, both from other institutions as well as the Naval Academy.  The different roundtable groups had various topics to focus upon, and my particular topic was “Governmental Information Security.” The other UNH student in attendance, Brianna Cole, is a UNH senior Political Science and International Affairs student and was in a different roundtable group at NAFAC.  Within my group I met students from Texas, Virginia, Michigan, Connecticut – and even one who was a German naval officer and could contribute to our discussions with examples of German government policies. Although I was slightly intimidated at the start of the week by the formal setting and the prestige of the Naval Academy, once the discussions began I found myself enjoying the intellectual discussions and becoming excited by the amount of knowledge I was gaining about foreign affairs.

In addition to the roundtable discussions, we listened to numerous speakers and panels to provide insight into the information age and the impact it has had on human security and the functioning of governments.  Speakers of note included former President Bill Clinton, General Michael Hayden, a former Director of the CIA and NSA, Marina Kaljurand, the Estonian Ambassador to the U.S., and David Kramer, president of Freedom House.  As a member of the Governmental Information Security roundtable, I engaged in many discussions about information leaks and particularly Edward Snowden: whether he was a hero or a villain, the government response to his information leaks, and the effects his disclosures had on U.S. relations with other countries as well as U.S. domestic affairs.  We also discussed information technology and its effect on warfare in terms of cyber warfare; for example, I learned more about the Russo-Georgian cyber war of 2008 and the stuxnet virus that the U.S. sent via computer to disrupt and destroy Iranian nuclear centrifuges.

Aside from the amazing educational opportunity I was given, I was able to make connections with many incredible people. The other civilian students I met were great and we bonded as a group surprisingly quickly.  In addition, one of the secondary goals of NAFAC is to strengthen civilian-military relationships.  I found it interesting to talk to midshipmen – students – at the Naval Academy about their experiences.  While I had trouble envisioning a college experience that required wearing naval uniforms every day, not leaving the campus during the week, and taking required classes such as navigation and martial arts, I realized that my conversations with the midshipmen were just like those I would have with any other college student.  I loved hearing about their lives – and I was thrilled to be able to go sailing on my last day at NAFAC with some midshipmen from the sailing team!

Obviously, the fact that NAFAC funded my hotel room at the Westin, a nice hotel in downtown Annapolis, and continued to give me extravagant meals throughout the week was nothing to take lightly.  I felt spoiled throughout the week and was amazed by how beautiful both the Naval Academy and the city of Annapolis were.  The Naval Academy had gorgeous stone buildings and the greenest lawns I had ever seen.  One afternoon we had a free hour and were able to visit the crypt of John Paul Jones, the “Father of the U.S. Navy” as well as the Naval Academy Museum and the elegant chapel.  The history of the Academy was interesting and I loved being able to explore the museum; of all the exhibits, I would have to say that the most intriguing was one displaying “bone ships,” model ships carved out of bones by French prisoners of war during their detentions in England during the 18th century.

The city of Annapolis was lovely as well.  It reminded me of a larger-scale Portsmouth with its quaint stores and brick buildings. I was able to take a short run through the city one afternoon and explored the waterfront area and the grounds around the state house, amazed by the beauty of the city and, after being accustomed to the barren wasteland of New Hampshire following a hard winter, the flowering trees and gardens.  On one night we had a NAFAC-sponsored “social” at Buddy’s, a crab restaurant in Annapolis, and on the others the students who were of age were free to explore the Annapolis nightlife. By the time the closing banquet on Thursday came around, I felt that I had gotten to know the other delegates much better than I had expected and that I had made some valuable connections.  I also learned a great deal about foreign affairs and have already found myself using some of my knowledge on UNH papers since my return to Durham.  I am incredibly grateful to the Political Science department for sending me to NAFAC 2014 and I know that I will continue to use the knowledge and connections I gained at NAFAC far into the future!