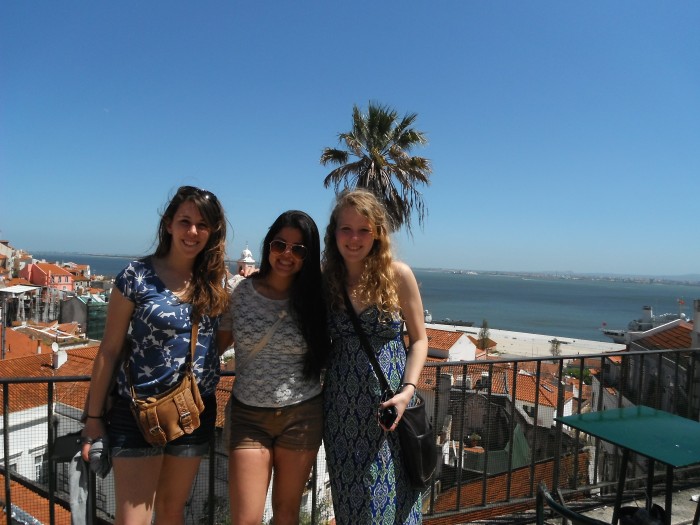 Hi everyone! This weekend marked my trip to Lisbon, Portugal, which was definitely one of the most exotic and unique places I’ve been.  I left Regent’s with three other girls early Thursday morning and we arrived at our hostel around 11 am.  Although the owner of the hostel did not speak much English, and we are certainly not fluent in Portuguese, we were able to communicate enough and the hostel proved to be in a perfect location.  The hostel was set back from the Baixa-Chiado square, one of the main squares in the city and thus the perfect headquarters for exploring, eating, and taking the metro.

After settling into our hostel we set out to find lunch and explore the city.  For lunch we ate at a restaurant called the “Green Room,” and after deciding that we didn’t know what most of the menu items were, I opted for cereal and fruit.  The fruit was great and offered me my first taste of Portuguese strawberries, a taste I continued to have as I purchased strawberries throughout the weekend.  Afterwards, we wandered around and found “se Cathedral,” an old, medieval cathedral in the middle of the city.  Although a wandering actor harassed us with its history at the door, we enjoyed the beautiful paintings and stained glass of the interior.  In fact, it reminded me a lot of Notre Dame in Paris.

We then walked up the street and got our first glimpse of the amazing red roofs, brightly colored buildings, and amazing blue sea that characterizes Portugal.  The views from the tops of Lisbon’s numerous hills are breathtaking, and between the warm, 70 degree weather and the amazing views, we were psyched to be in such a city.  However, we then decided that we did not know how to find our way around and purchased tickets for a bus tour.  The tour took us around to some of Lisbon’s more famous sights, including the various squares, the castle, and the bull-fighting arena.  However, it also took us outside the city center a bit to see the Mosteiro dos Jeronimos, a beautiful 15th century monastery in the Belem area of Lisbon.  We also saw the Ponte 25 de Abril, or the “25th of April Bridge,” which is a bridge that looks remarkably like the Golden Gate Bridge in San Francisco.  After making this observation, the audio tour guide told us that, in fact, the bridge was built by the same company that built the Golden Gate Bridge and was named as such to celebrate Portugal’s form of Independence Day.

After the bus tour, we ate at a Portuguese restaurant where I tried a cod, cream, and cheese dish that was traditionally Portuguese.  One of my friends got a chicken kebab that looked extremely exotic, and although we were not used to our meals we enjoyed them.  As we had been awake since 3 am we went to bed early that day, but we were up the next morning around 8 for our trip to the beach.

We began our day at a pastry store with some of the best breads and pastries I’ve ever eaten.  After ordering a tea, pastry, and toast meal and waiting for an absurd 15 minutes for my toast, I bit into it and agreed with my friend Emily that it was the best toast I’ve ever eaten – definitely worth the wait. Unfortunately, I did not order the orange juice about which my other friends raved.  They said it tasted like “an orange squeezed into a cup,” and after trying a sample I agreed.

After breakfast, we went back to the start of the bus tour and waited for the orange line, the bus that traveled to the beach areas outside of Lisbon.  The views as we traveled of the bright blue water, rocky cliffs, and brownish-white sandy beaches were incredible, and after departing the bus at the quaint village of Cascais, we agreed that Portugal’s reputation for beauty is well deserved.  After arriving in Cascais we laid on the beach for several hours before finding a pizza place for lunch and shopping for souvenirs.  The souvenir shops in Portugal are much nicer than many of the ones we’ve seen in other cities due to Portugal’s reputation for tiles and, strangely, painted chicken figurines.

After Cascais we took another bus to a bigger, more crowded beach closer to Lisbon.  The beach was busy but relaxing, and we spent an enjoyable afternoon tanning and watching the interactions of the Portuguese people.  Then we headed back to Lisbon for a dinner outside and drinks for my friend Lisangi’s 21st birthday at the bar next to our hostel.  We loved the atmosphere of Lisbon at night, as the Portuguese head out for dinner around eight or nine to dine in the warm, light surroundings.  During our outdoor dinner we enjoyed the sounds of street music as we observed the multitudes of people walking by and the beautiful tiled buildings surrounding us.  The bar was also an example of the personality of the Portugese; when we arrived around nine it was empty, an occurrence that would never happen in the London pubs.  As the bar was directly next to our hostel, during the previous night we had been annoyed to hear the live band playing long into the night.  However, from the other side of the wall it was much more enjoyable and we were happy to experience a taste of the Portugese nightlife.

The next morning we decided to take the entire orange line of the bus tour.  After eating breakfast at our favorite pastry place (I got the orange juice this time- it was amazing!) we went to the first stop of the tour and waited for the bus to depart.  The first half of the coastline tour was mostly what we’d seen the day before on our way to the beach, but the second half along the coastline was less populated and breathtakingly gorgeous.  Towards the end of the tour we saw giant rolling green hills, rocky cliffs, fields full of flowers and cacti, and isolated sandy beaches.  This section was definitely my favorite part of Lisbon, as I was able to see the natural beauty as well as the quaint man-made buildings.

Unfortunately, after we finished the bus tour it was time for us to leave Lisbon.  We had one last lunch (I had grilled cheese that actually tasted like the grilled cheese I like at home) with a pitcher of sangria that had more fresh, Portuguese fruit than I ever expected.  Then we took the metro to the Lisbon airport, hopped on our last flight with Easyjet, and arrived in London around 11 pm.  Luckily, we were able to catch a ride on an earlier easybus than the one we had booked and were at Regent’s a half hour ahead of schedule.

The next morning, I decided to attend the London Marathon despite the fact that none of my friends wanted to go.  Some of them just weren’t interested, while some had parents who had forbidden them from going due to the Boston bombings the week before.  However, once I showed up to the marathon in my New England Patriots shirt (thanks for sneaking it into my suitcase Dad!) and my “Boston Strong” sign, I was overjoyed that I had made the decision to come.  As I stood in front of Buckingham Palace and cheered on the winners of the men’s and women’s races and then the masses of marathon runners that came across the finish line later, I was happy to be a part of such an energetic, supportive crowd.  I talked to several people about my sign – one of whom was from Boston herself and was happy to see me supporting her home city.  The day was warm and sunny with a slight breeze, a day unconventional for London but perfect to watch a marathon.  Unfortunately, I had too much homework to stay for the whole race but I stayed for as long into the afternoon as possible.  Then I went back to Regent’s, where I basically spent three days switching between going to class and working on homework.  This has been the week containing all my final papers, so I have spent much more time in the library than I would like.  However, the weather has been warm and sunny so I’ve alternated between doing my homework outside during the day and working on it at night in the library.

On Tuesday night, I was able to obtain a free ticket to Once, one of the major musicals in London this semester.  The play was based in Ireland and featured a great deal of traditional Irish music.  It was a romance story, and our favorite part was before the play started, when we were able to go onstage before the play to a “stage bar” where the cast played music.  The next night I saw The Tempest at the Globe theatre, the second night of the Globe’s summer season and the day after Shakespeare’s birthday.  After arriving at the Globe, we immediately noticed the energy in the theatre and the beauty of the stage.  The play turned out to be one of my favorite I’d seen in London; Prospero, Ariel, and Caliban were all amazing actors, and the audience interaction was surprisingly hilarious. The Elizabethan-style costumes and language gave me a taste of what the plays may have felt like in the original Globe, but it was still enjoyable as a modern night out at the theatre.  This weekend is sadly my last full weekend in London, and consequently I am planning to visit a lot of sights I have not yet seen.   I will be headed home on May 5th and I am starting to look at souvenirs and packing.  My big purchase of the week was my tea set I bought as a gift to myself – I can’t wait to put it in my apartment next year!

I’m starting to be sad to leave but I’ll be happy to see all of you once I’m home! Thanks for reading!