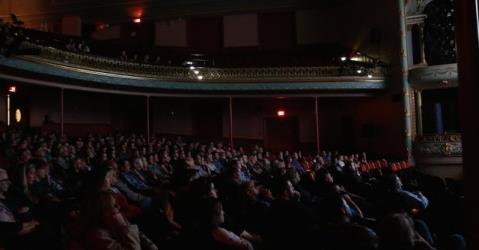 One of the best parts about being a part of the UNH Social Team is being able to go to different events that I wouldn’t have otherwise been able to go to. A great example of this is being able to go to the New Hampshire Film Festival this past weekend. For three days I was able to see new movies and documentaries, meet a few celebrities and see how UNH reaches out into the filmmaking scene. Let me take you day-by-day through the 14th Annual New Hampshire Film Festival.

Friday at the NHFF

While the festival started on Thursday, I was unable to go due to classes and the rain. But all that lead to an even better day on Friday. The sun was shining, it was a warm and beautiful day. I got to the festival early in order to pick up my weekend pass and then headed off to my first film of the weekend. Or rather series of short films. In the Music Hall Loft is where many short films and first runs of films were shown for the weekend. I arrived for a 2:15 p.m. showing of six short films: Jonathan’s Chest, Time Travel Lover, Wild Harvest, Dead Hearts, One Year Lease, and Gregory Go Boom. I was planning on this screening for the short film Dead Hearts which had caught my eye while I was browsing trailers on the NHFF website. What I was not expecting was a short film staring the guys who wears kittens in the Hanes commercials, a movie about two men renting an apartment with their cat in New York City, and Michael Cera. And all of them were fantastic. I’ve included links to all of the available trailers with the title of the short.

With the exception of Wild Harvest, each of these films was something that stuck with me. They were all hysterical in their own way and surprising. Jonathan’s Chest, the only other non-comedy with Wild Harvest, was a simple psychological thriller. The main character leaves you guessing whether he has multiple personality disorder or if all of the action of the film was real. The Time Travel Lover featured the kitten shirt guy from the Hanes commercial. In the short, which kitten guy (Elisha Yaffee) wrote, a couple is at the beginning of their relationship the day before time travel is invented, which they have no idea about until Yaffee’s character from three weeks and farther into the future crashes their date. Hilarity ensues. Dead Hearts was the short that I had been planning on seeing all week. This film is a very indie-style telling the story of a child aged mortician and the love of his life, a blind karate enthusiast named Lola. Again, hilarity ensued. One Year Lease was not what I was expecting as an elderly woman’s voice was heard over the PA system of the Loft and scenes of a New York City apartment filled the screen. Gregory Go Boom was fully unexpected as Michael Cera starred in this short with a surprise ending. Well, surprise everything I guess. Definitely something those Cera fans to check out.

Following the short films ending I ran over to the Music Hall for a screening of Boyhood which I had been wanting to see all summer. Boyhood is that film that they created over 12 years using the same cast. And without ruining it for anyone who wanted to see it, the trailer gives you the complete wrong idea. Still, the film was fantastic and I would completely recommend it. Following the screening, I made the choice to try and find a dinner for one and skip most of the reception before the opening ceremonies. This proved to be difficult as I ended up with a Starbucks sandwich and a wobbly table. I quickly downed the sandwich and returned to the Music Hall for the opening ceremonies and my last film of the day.

During the opening ceremonies, the founding members of the Festival talked and invited up other key players to the festival to talk. There was a lot of talking. One of those who spoke was Mike O’Malley of UNH’s class of 1988. He talked about growing up in Nashua and his time at UNH and how excited he was to be a part of the New Hampshire Film Festival. Following his speech and several more was a performance by The Super Secret Project and then a screening of Men, Women & Children. The SSP performance had me in tears before the start of the film, which was just made uncomfortable by the woman sitting next to me. But hey, feelings of uncomfortableness is all a part of the community experience of watching a movie in a cinema. The film was great and I left with a lot of thoughts about parental censorship…. and how creepy Adam Sandler can be.

After a long day I returned to my welcoming dorm room to rise bright and early for another day at the New Hampshire Film Festival.

Saturday at the NHFF

For the Saturday portion of the film festival I attended a panel about Breaking Bad, The Walking Dead, and Game of Thrones with one of the producers, Michelle MacLaren. While The Walking Dead had to be skipped over because of time restraints, the panel was quite interesting and I know I’m curious now about Breaking Bad which is on my list of shows to binge watch. Following this, I wanders around Portsmouth for a while and did a bit of celebrity photo ops. And by that I mean I got a picture with Flea of Red Hot Chili Peppers and Mike O’Malley, who I had seen at a comedy panel that afternoon.

After some much better food choices than the day before, I settled in for Low Down. This film, which was produced by Flea and Anthony Kiedis, was based on a novel about the jazz scene in L.A. during the 1950s. While a very heavy film to end the day with, it was very interesting. I highly recommend it if you’re into jazz.

Sunday at the NHFF

For the final day of the festival I took to first bus off campus to Portsmouth to see a film called I Believe in Unicorns, which is nothing like you’re probably imagining with a title like that. This film takes the story of a high school girl and parallels it to the story of taming a unicorn. The result is something very interesting and not something you should watch with your parents. So a great movie for college kids. After that, I finished my festival experience at a screening of E-Team. This documentary was extremely real and timely, shedding light on the work of the Human Rights Watch and their work. If you get the opportunity to see this Netflix documentary, watch it. This film took on even more emotion and reality when James Foley’s parents (both UNH alumni) were brought on stage after the screening to accept an award on behalf of their son who was a cinematographer for the film. Their acceptance and story was truly amazing and you should check out their fund set up in honor of their son.

John and Diane Foley ’70 with the co-director of the E-Team documentary, accepting an award on behalf of their son.

With the festival complete, I headed back to campus to reflect on the films I had seen and what a great experience going to NHFF was.

Did you go to the NHFF? What what your favorite film?