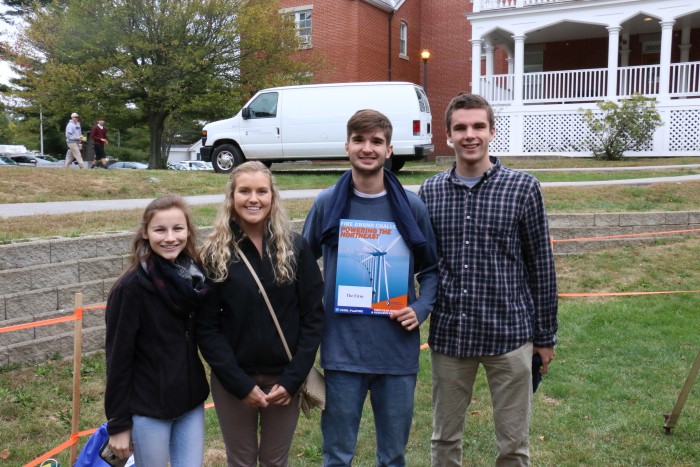 “All our dreams can come true, if we have the courage to pursue them.” – Walt Disney

I had a dream when I was younger that involved me going to college and becoming successful. It wasn’t until I held my acceptance letter from UNH that I truly saw my dream becoming a reality. Throughout high school, I was not a stand-out student or athlete. I was just your average Joe who was a quiet leader. I preferred to lead by example and let my actions speak for themselves. College was offering me the opportunity to learn and grow as a person. Words cannot describe how excited yet nervous I was to start the school year.

My first few days were not as hectic as I thought. The first-year students were given the weekend to acclimate to their new surroundings and make some friends. After the first few weeks of classes, I received an email from Tamara Rury and Sean Stewart about receiving a nomination to represent my FIRE team on FIRE’s (First-year Innovation Research Experience) student-advisory board.  Members of FIRE’s student-advisory board are called Igniters and we were nominated by our peer advisors due to our discussion in the classroom and commitment to get involved on campus.  That is exactly what I did. I went to events and submitted them for “points”. The point system was intended to make some friendly competition and encourage kids to get involved in all the amazing things this campus has to offer. I was honored to accept the role, but skeptical about the opportunities I would receive.

My first opportunity that I received as an Igniter was to present the FIRE Program to the UNH Foundation and Alumni Boards. I was blown away at this chance and accepted immediately. I had never been so nervous in my life for that presentation. After my peers and I presented, we were invited to network and talk with those board members at President Huddleston’s home. It was completely uplifting to hear how excited they were about the future generation and it was special to see how much they genuinely cared about our education and progression. I met several amazing people that I will never forget and that was only the beginning.

Second semester was just as fulfilling as the first. I got the chance to go to Washington, D.C. with other first-year Paul students. We met with alumni like Stu Damon, Kevin Blafkin, Anne Marie Wemmlinger and Sylvie Balenger that were all seasoned veterans in their fields. I learned a lot about their experiences and about the hospitality management industry. We also met Senator Jeanne Shaheen to discuss college graduate debt and Ashley Rennebu about The Washington Center. We even had the opportunity to explore the city! I met a lot of great people on that trip and it would not have been possible without Paul College and FIRE.

On top of all of this, I served as the treasurer of my hall council, participated in community service, and I am a member of SCOPE. My involvement on campus gave me the confidence I needed to land a co-op position at Cisco Systems as a software engineer this summer. I am very excited to start my job and learn as much as I can. UNH gave me the skills I needed to make a great resume and push myself outside of my comfort zones.

FIRE has pushed me to become a much more hardworking and dedicated person. I believe FIRE pushed me to be successful. I don’t think I would have landed this Cisco job without the help of FIRE and my campus involvement. Coming to UNH was the best decision of my life and overall I would not change my first-year experience for anything. I hope to one day inspire kids to work hard to achieve any goals they set for themselves.

Derek Steele is a motivated first-year, Business Administration student at the University of New Hampshire. He graduated from Bedford High School in Bedford, New Hampshire. He recently accepted a job offer at Cisco systems and is very excited to learn as much as he can.

At UNH, Derek is an Igniter within the FIRE program in the Peter T. Paul College of Business and Economics. He also is a member of SCOPE and is the treasurer of his hall council. The Student Committee on Popular Entertainment plays a role in concert planning where they manage a large budget and assist with the setup and breakdown at the event. He is very excited about the future and can’t wait for more opportunities like he has received so far.