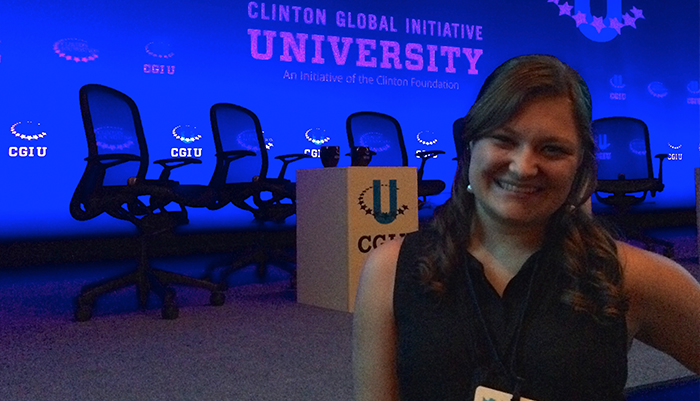 One of the main themes of Clinton Global Initiative University 2014, which was held this year at Arizona State University in Tempe, Arizona, was how to transform young people today into the future world leaders of tomorrow. Each attendee had to apply with a “Commitment to Action” on how they planned to make an impact in the world. As a second-time attendee at CGI U, my commitment is to help bridge the gaps between different ethnic and religious groups in Bosnia-Herzegovina. I received an International Research Opportunities Grant (IROP) from the University of New Hampshire to study transitional justice and live in Bosnia-Herzegovina (BiH) this summer. Attending CGI U 2014 was an important stepping-stone to implementing my commitment and preparing for my time in BiH.

“Never let school interfere with your education.” – Mark Twain (via Bunker Roy, founder and director of The Barefoot College)

From March 21-23, CGI U participants were able to attend numerous plenaries and working sessions with inspiring leaders and activists in the field. There were also several networking events, where we were able to connect with fellow commitment-makers from around the world. This year, 1,000 students from 300 universities and 75 different countries all came together with one goal – to create a better future for people around the world. With speakers such as President Bill Clinton, Hillary Rodham Clinton, Chelsea Clinton, John McCain, Jimmy Wales (founder of Wikipedia), and even Jimmy Kimmel, attendees were able to hear a wide range of views and gain valuable tips and advice from current change-makers.

During the whirlwind weekend at CGI U, I was able to attend all of the large plenaries (The Age of Participation, Coming in Second: Scaling What Works, and The Future of Higher Education: Redefining Learning As We Know It) as well as two smaller working sessions (Transitional Justice in Post-Conflict Societies and Broken Barriers: Protecting Immigrant and Refugee Rights). In the session on transitional justice, experienced activists and organization founders discussed the issues of access and gaining trust in fieldwork. This session was particularly important to my project this summer, since I will be living in Bosnia-Herzegovina and interviewing residents about their perceptions of the government’s transitional justice mechanisms. This includes whether or not residents believe that the government has done enough to alleviate the tensions between the different ethnic and religious groups that were a major factor in the 1992-1995 war.

Throughout the conference, I met hundreds of students who are just as optimistic and committed to changing the world as I am. It was a revitalizing experience, and many of us have already begun to connect via social media and will continue to discuss our commitments and future partnerships. The closing conversation of CGI U 2014 was Jimmy Kimmel interviewing the “Clinton Super Family,” which was a humorous and memorable way to end an already incredible weekend. Many of you may have seen Kimmel’s attempt to compete with Ellen DeGeneres’ famous Oscar selfie with his own “3 Clintons and a Kimmel” photo, which he took after the on-stage interview. Once the closing session was over, attendees went to the CGI U Exchange dinner and networking event. I was fortunate enough to be selected to have a table at the Exchange (see photo below) to discuss my commitment to action. It was an exhausting couple of hours in which I talked about Bosnia-Herzegovina to at least 300 people, but it was great in that it connected me with people who will be doing similar research in the region this summer. With that, CGI U was over, and we all flew home, worn out but excited about what the future will bring.

Hannah Waller presenting at the CGI U Exchange about her IROP project in Bosnia-Herzegovina this summer.

For more information about Clinton Global Initiative University or my IROP in Bosnia-Herzegovina this summer, feel free to contact me at hwaller22@gmail.com or on Twitter (@hwaller22).