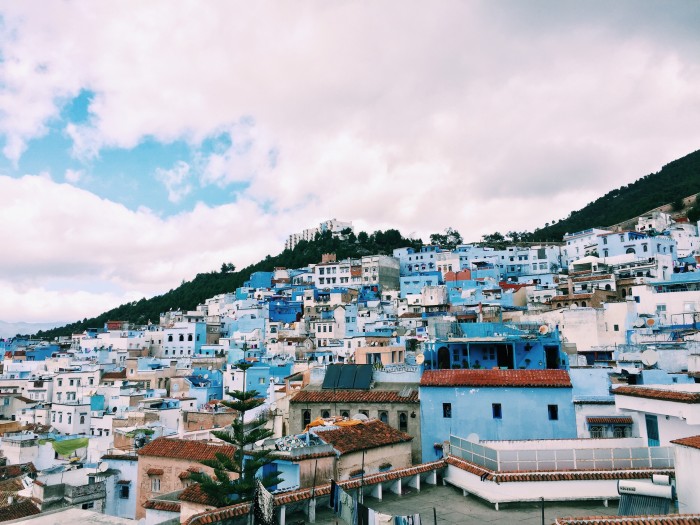 My name is Charlotte, and I’m a sophomore currently studying abroad in Granada, Spain. Along with about 23 other UNH students, I am taking part in the UNH-managed Granada Program, offered through COLA’s Center for Study Abroad. I am sharing some of my experiences and observations of Spanish culture throughout the semester here on UNH Tales. You can read all of my previous posts here.

Last weekend, I had the incredible opportunity to visit Morocco. Being in Spain, I knew that Africa was about as accessible as it was ever going to be, and I had to take advantage of this. I had an amazing time in Morocco and left truly enchanted by the colorful cities, delicious food, beautiful landscapes and vibrant culture.

Here are some of my favorite things about Morocco…

One of the first things that stood out to me was how nice the people were. We were greeted by genuine smiles everywhere we went, despite being a large group of young Americans. The Moroccan people were pleased to have us there and seemed excited to share their culture.

As we drove from city to city, our bus wound through hills and lush, green landscapes supported by Northern Morocco’s Mediterranean climate. Beautiful lakes and mountains are not something you might associate with Africa, but there were plenty to be found in Morocco.

Morocco’s culture is very different from American or European culture. This is reflected in the style of dress, the way of life, the local food and drink, and the religion, in particular. One of my favorite cultural moments of the weekend was hearing the Islamic call to prayer ring out over the rooftops of the city.

I loved the food of Morocco! It featured fresh vegetables, warm couscous, meats in sweet brown sauces, and doughy round loaves of bread. As we were wandering through the medina (old city) of Chefchaoeun, we followed the scent of baking bread into the house of a local who was cooking some loaves in an earthen oven. The fresh, warm bread practically dissolved in our mouths as we devoured it. My other favorite aspect of Moroccan cuisine was the delicious, traditional mint tea.

Every sign in Morocco is written in Arabic and French (due to a long-standing French presence in the country), but most Moroccans we encountered spoke Spanish and English too! I was so impressed by the multilingual locals.

The first city we visited in Morocco was Chefchaoeun, which is known as “The Blue Pearl” because of the vibrant blue color of its buildings. All of the homes and buildings in the medina are painted in varying shades of blue. There are several theories about this: Our Moroccan tour guide told us that the paint keeps the insects away, but it’s also thought that blue signified heaven to the Jewish refugees who settled here in the 1930s. The other city we visited, Assilah, also had buildings with colorful façades and vibrant murals.

The practice of bartering.

In Morocco, no item is priced at a set amount — everything is up for a little negotiation. This unique aspect of Moroccan culture was fun to try out. The many eager street vendors were more than willing to spend a few minutes bartering with you.

My weekend in Morocco was filled with one memorable moment after another. I was exposed to many new things I could never have imagined. I left with a huge appreciation for the Moroccan people and their culture, and with thankfulness for all the new experiences that studying abroad has enabled me to have.

Newer PostThe Basics of Not Being #Basic in the Kitchen #4: Roasting Vegetables
Older PostOut for a Stroll: Walking Routes at UNH