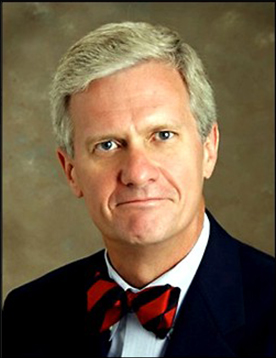 By now most everyone knows who the fake President Huddleston is, but how many UNH students actually know who the real one is? Judging by the lack of people who even noticed him walking through Hoco on Thursday afternoon, I would say very few. Seeing as Mark Huddleston is the president of our university though, shouldn’t we at least be able to recognize him?

Because it’s my senior year, I’ve made a bucket list of all the things I want to do before I graduate. One of the things on the list was to finally meet President Huddleston because somehow in the past three years, I never have. Of all the places on campus that I would ever expect for this to happen though, Hoco was definitely not one of them. There he was though, just filling up a cup at the soda machine by the fish bowl.

“That’s Prez Huddleston!” I blurted out to my boyfriend who was standing right next to me. Yes, I actually referred to him as this out loud. And yes, he definitely heard me. He even looked up at me and smiled to confirm this.

“How do you know?” asked my boyfriend.

“Because I know!” I replied quickly. I didn’t know how anyone couldn’t know. Then before I could even realize what was happening, President Huddleston was standing right in front of me, shaking my hand.

Now I know that he is just the president of a state university, and isn’t a celebrity or anything, but I was very excited. I introduced myself and told him the basic facts (year, major, hometown) and I probably talked way too fast for any of it to be comprehendible. The worst was when he asked me what I want to do when I graduate and I just stammered like a fool because who really knows the answer to that question?

I also told him about my bucket list and how I was very excited to be checking meeting him off of my list. I had originally planned on just going up to the door of his house and knocking on it if I really was running out of time, but I decided against telling him this. Why seem crazier than I already did?

Chatting with President Huddleston, even if it was only for five minutes in the middle of a very busy dining hall, was awesome and I would love to talk to him again. One thing I noticed while standing there with him though, was that no one else recognized him or had the slightest idea who he was. My boyfriend even told me that he would never have known it was him and my friends later asked how I knew what he looked like.

I began to wonder why President Huddleston doesn’t make himself more present on campus. I know that he obviously has a very busy schedule and has a million things to do, but I also thinks it’s important to interact with students. Talking to other people, I found that they think the same thing. Huddleston should at least introduce himself to the freshmen at the pep rally each year.

I think that maybe President Huddleston should give this a shot – Just going to the dining hall, walking through the MUB, or stopping by random classrooms would be awesome! Students like this kind of interaction and I think that it makes them feel more connected to the university. President Huddleston (the real one) even did the simple act of retweeting me after I tweeted about meeting him and that was really cool. It’s the little things that bring this campus together and I think the more of this the better.