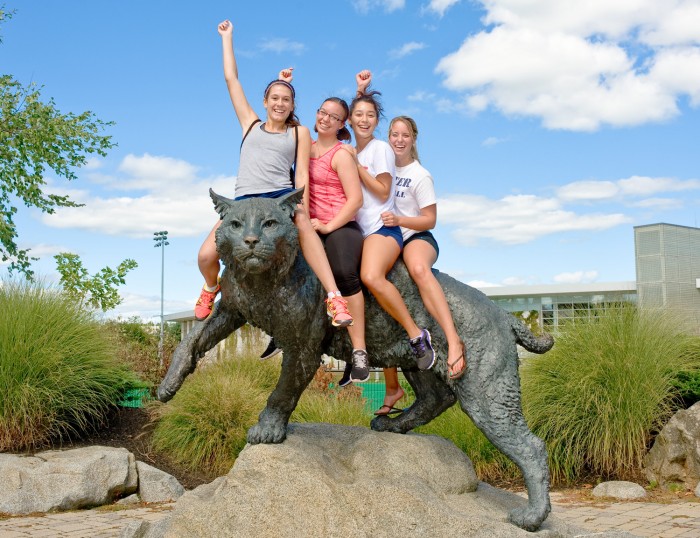 The history of UNH’s mascot is one of wild animals, school spirit, kidnapping, and traditions.

Here’s where it starts: The Wildcat was voted in as the official college mascot February 4, 1926. UNH almost had the Durham Bulls, a name the media gave the hockey team. Some honorable mentions for mascot included the Huskies, the Eagles, and even the Unicorns.

But you see, the N.H. Club went on record with some very good reasons for the wildcat to be the mascot. They said the animal is small and aggressive, much like the state of New Hampshire. Live Free or Die, baby.

Also, the school’s athletic teams played more like a lithe, cunning, and ferocious wildcat than a lumbering bull. There were some practical considerations as well. Who would want to transport a bull to every sporting event to serve as the school’s mascot? That would be insane.

No, you’re much better off with a manageable mascot like a wildcat. That’s perfectly sensible.

In 1927, some students learned a farmer in Meredith, N.H. captured a wildcat.  A senior honor society named the Blue Key took up a collection from the student body and sent three students to purchase the cat.

The cat was named Maizie, and she first appeared at the 1927 homecoming game. Maizie appeared at all home games, and spectators were warned to stay well away from her cage for their own safety. Common sense stuff. After football season, Maizie was placed under the care of Benson’s Animal Farm in Hudson, NH, where she died during the winter of 1929. The Blue Key had her body stuffed and mounted. Now Maizie can now be found in the Milne Special Collections and Archives.

Maizie’s still here. She’s on display in the Milne Special Collections and Archives

Imagine it, folks: imagine a freshman at the homecoming game in 1927 who sees a caged wildcat on display to add to the madness. The freshman takes a step to close, and someone pulls him back. You might get mauled, stupid.

Maizie was not the school’s last live mascot.

1932-1933: Meet Bozo (renamed Skippy)
The second wildcat was originally named Bozo. Bozo was purchased from Benson’s Animal Farm in 1932. The students agreed to rename the cat for the first player to score for NH. Robert Haphey ’35 scored that touchdown, and the wildcat was given his nickname, “Skippy.”

Skippy (the cat, not the athlete) vanished in spring, 1933. The students never found out what happened to him.

There was a dilemma the next time the students tried to name the wildcat in honor of an athletic accomplishment. They had agreed to name the cat after the first player to score for NH during a game against Maine. The first field goal was kicked by a man named Henry, but a man named Charles scored the first touchdown. There was dispute over which name to use. The Blue Key club compromised with “Butch” in honor of the beloved Head Coach William Cowell. This began a tradition of naming the wildcat Butch.

Butch II was the only wildcat to be kidnapped by a rival. He was found missing from his home behind Lambda Chi Alpha fraternity house in 1939 just one week before UNH was to play Harvard. Harvard and Tufts (who had recently  lost to UNH) were both suspected culprits. No one claimed responsibility, and soon an insurance salesman was shocked to find a caged Butch abandoned in his garage in Woburn, Massachusetts.

That’s right- some poor insurance salesmen opened his garage and found a snarling, caged wildcat waiting for him. It was hungry, too.

Harvard denied all responsibility for the theft, claiming to have so many cats at Harvard they did not need a wild one.

Butch III lived on campus for one week before dying. Before the Blue Key could replace the animal, a student wrote  “The well-intentioned persistence of Blue Key in attempting to keep a mascot not susceptible to domestication seems to many of us, in view of the net results, very unwise.” The Blue Key agreed, in light of how poorly the wildcats had dealt with the lights, sounds, and energy of sports games.

The days when living wildcats could be seen at sports games, straining against a stick and leash were numbered, but not entirely over.

Live Wildcats at UNH sporting events saw a brief revival in 1970. Jackson Chick of Somersworth, NH, bought a six-week old wildcat kitten in Texas while making a film about the life of a wildcat. His granddaughter named the beast Fudge, and the family had it declawed. Chick was a big UNH fan even though he was not an alumnus, so he offered to bring his pet wildcat to campus to serve as the mascot. Fudge prowled the sidelines for only one football season.

The Wildcat costume first appeared at a Dartmouth football game in the fall of 1968. The mascot surprised almost everyone, including the players and cheerleaders. The Alpha Phi Omega service fraternity came up with the idea while discussing service projects for the University. UNH athletic director Andy Mooradian loved the plan. Alpha Phi Omega promised to fill the costume for all the school’s football, basketball and hockey games. Bob St. Cyr, a senior zoology major from Manchester, wore the costume for all football games. According the St. Cyr, the purpose of the mascot is to “keep up the spirit of the team, cheerleaders, and fans.”

In 2000, the athletic department created a ferocious new wildcat logo to represent the varsity teams. They also produced Wild E. Cat, a friendlier mascot for children’s programs. A 6-foot wildcat costume was created based on the logo.

Appearances from Wild E. Cat were in such high demand that a second costume was needed. This time a more athletic, muscular character was designed and created. The athletic department selected the name Gnarlz, (pronounced “narlz”) from a web poll with over 50 suggestions.  Gnarlz first appeared for the football game on September 20, 2008.

So there it is, the fabric of a UNH tradition. Wear the wildcat with pride- it’s a symbol of tenacity. It’s rich with stories. It has roots in the character of this great state. A unicorn, though. Think about that.