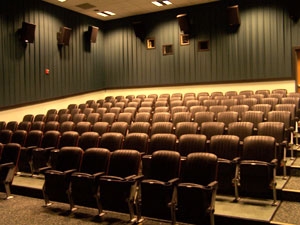 Even though spring break cut a week out of March’s MUB Movie schedule (not that anyone’s complaining about spring break being almost here), you won’t be short of good options for your movie nights! This month is just one hit after another. Here’s a review of what’s showing, to help you decide which is going to be the flick that suits your fancy.

The second movie in which three friends who misguidedly try to kidnap someone in exchange for a ransom fee. A comedy with a prime cast, and a script that keeps its head above water. If you didn’t see the original, you’ll have no trouble following along, but jury’s out on whether you’ll find it quite as funny. Big fans of the original – this one’s a pretty safe bet for you! The same shenanigans with a few new characters makes this a fun ride. It might not make it onto my list of favorites from Jason Sudeikis, Charlie Day, or Jason Bateman, but their chemistry guarantees at least a few big laughs!

The Hunger Games: Mockingjay, Part I

This movie is the third installment of the series that follows Katniss Everdeen in her struggle to survive in a post-apocalyptic world. Calling all fans of the Hunger Games – buy your ticket now! I know how much flack the third book got when it came out, but so far, the movie is exceeding expectations. I thought the acting was impressive, the production design is creative, and the writing stays true to the series while beefing up the circumstances. It’s exactly what you’re expecting and hoping for when you go to see a Hunger Games movie, and you will not be disappointed!

This is a movie-musical that follows the adventure of a baker (James Cordon) and his wife (Emily Blunt), as they try with the help of a witch (Meryl Streep), to lift a curse off their family. This one will be a hit or a miss with you guys. For you theater kids out there, like me, this screen-version of the Stephen Sondheim musical by the same title is everything we hoped for. The costumes and set are original and imaginative, and the music and vocal performances are stunning. If you aren’t into musicals, you might not dig the style, but I can’t think of anyone who wouldn’t have fun watching Anna Kendrick and Chris Pine, and the rest of the cast, put modern twists on the fairy tales we know and love.

The Hobbit: Battle of the Five Armies

This third and final addition to the Hobbit series meets the high expectations set for any movie set in Peter Jackson’s middle Earth. As with the other two movies in the Hobbit trilogy, this one is packed with superfluous fight time to drag out a story that really could have fit into one movie. This makes the movie feel just as long as it is – which is pretty long, frankly. Honestly though, any Lord of the Rings fan is going to see it, maybe even more than once (cough cough, me), and as long as you don’t expect the masterpiece finale that Return of the King was, you’ll be satisfied. You can expect stunning visuals, poignant characters, and heart-pounding action balanced with Bilbo’s (played by Martin Freeman) delightful British humor. For the ending, bring tissues.

What movies did you watch this month? Let me know what you thought of them in the comments! For more things to do at the MUB, check out their website.