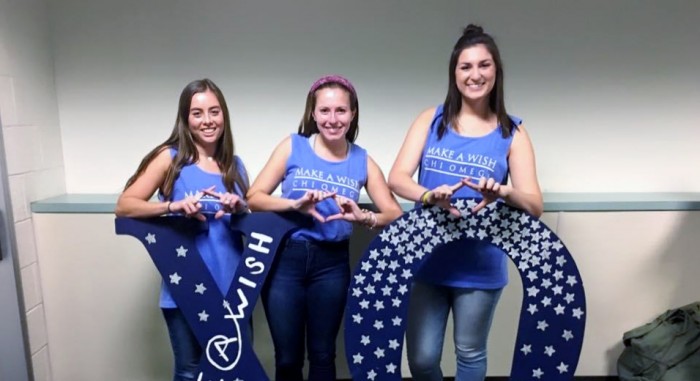 When I first stepped onto campus, you could say I was overwhelmed. There was so much to do, and I didn’t know where to start. After starting classes and checking out a bunch of different organizations I was introduced to the FIRE Program. I was surrounded by intelligent, driven individuals and was motivated to do more. After hearing about the different organizations that my fellow classmates were involved in, I began to look into what else I could do to be a more active member of the UNH community.

When I told my friends and family that I had joined a sorority only a month into my freshman year of college, at first they didn’t believe me. To be honest,  if you had asked me if I wanted to be involved in Greek life when I was in high school I probably would’ve laughed and said “no”. However looking back at these past three months, reminiscing on the events that I have been involved in, and the lives that I’ve impacted, I wouldn’t have wanted my freshman year to have started any differently.

I have to attribute some of my willingness to rush a sorority to my involvement in high school. As a self-proclaimed overachiever at Goffstown High School, I immersed myself in clubs and community service – staying busy was my norm. So when the first few weeks of college had come and gone I had noticed that as the days went by, my boredom had grown. I was so used to being involved that I felt out of place and lonely, and although I was attending the freshman orientation activities, I wanted to do more. So before I knew it, I was signed up for Fall Recruitment and was counting down the days until I would meet the sorority that would forever change my life.

It sounds stereotypical, but the moment I stepped foot into Chi Omega’s house, I knew that it was where I was supposed to be. The girls were welcoming and I had felt like I had known them my whole life. It helped that our conversations flowed, making the decision to choose Chi Omega an easy one; I never wanted to leave! On the third day of recruitment, Chi Omega introduced their philanthropy, Make-A-Wish; there was a tug on my heart – my closest friend had been diagnosed with cancer only four months prior.

I think it’s pretty rare that a single person can have such a big impact on your life in such a short time. My friend, 16 year-old Maddie Carlson, a junior at Goffstown High School was diagnosed with Ewings Sarcoma, a rare form of bone cancer, in May of 2015. Before arriving at UNH, Maddie and I would hang out almost everyday, and when move-in day rolled around it was one of my hardest goodbyes.

After receiving a bid from Chi Omega, I called everyone I knew to tell them the news, including Maddie. I felt so proud to be part of an organization that contributed to something that meant so much to me. A few weeks later I was initiated as a new member, and Chi Omega held their annual “Mr. UNH” pageant, with all proceeds going towards Make-A-Wish. After the event was over, and all the girls were cleaning up, I introduced myself to the current Miss New Hampshire, Holly Blanchard. I wanted to know how I could get more involved and make more of an impact at Make-A-Wish at the state level. Holly told me about an internship that Make-A-Wish offers in their state office, and I eagerly applied that week. At the beginning of my college experience I don’t think that I would have taken the initiative to apply for the internship, but through the sorority, I have gained confidence in myself and my work.

Being immersed in a university full of ambitious, bright students has helped me so much, and joining Chi Omega had given me the push that I needed to set me on the track towards success. I have been handed so many great opportunities at the University of New Hampshire and can’t wait to see where the next four years take me.

Lauren Gross is a driven first-year student at Peter T. Paul College where she studies Business Administration. She graduated in the top 15% of her class at Goffstown High School and was involved in Student Council, the Leo Club, and National Honor Society. During her time in high school, Lauren was awarded Volunteer of the Year along with other members of an anti-bullying club that she was involved in, and upon graduation she received the Cumberland Farms “Believe and Achieve” scholarship along with the Lion’s Club Community Service scholarship.

At UNH, Lauren is involved in the FIRE Program as an Igniter where she motivates her classmates to get involved in the Paul College and UNH. She is also a member of Chi Omega and has enjoyed getting involved and contributing to Make-A-Wish. In her free time she loves to paint and be as creative as possible, as well as hang out with friends and volunteer her time to the community.