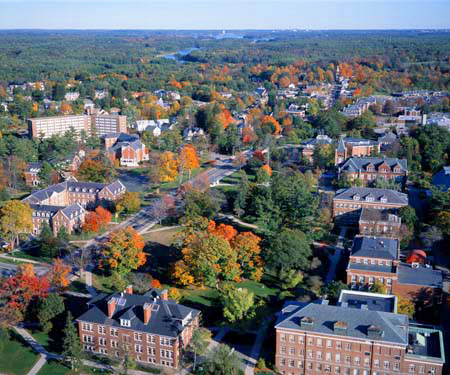 Finals start next week and the thought of going home for five weeks, while maybe not the most exciting thing in the world, is there. You’re split on wanting to be in the peace and quiet of your own room while knowing that you’re going to miss chilling in your dorm with your lounge crew. While trying to figure out when you’re leaving campus and the stress of exams and essays builds, take some time to appreciate all of the fun you had this semester and all of the awesome things that happened at the good old University of New Hampshire. Too much happen, well here’s a recap of all of the biggest events of this semester!

August and September marked the beginning of college for freshmen and the last fall semester for seniors. While maybe not as memorable a month, aside from move in and the picnics, as the rest of the semester, UNH had some pretty cool stuff happen. Late September brought Hollywood to campus as history professor Ellen Fitzpatrick’s Letters to Jackie was turned into a TLC film and screened at the MUB. Academy Award winner and producer of Letters, Bill Couturie came for the screening and answered questions from the packed audience. Along with this mini-Hollywood invasion, halls across campus held their floor wars or some other way to start fostering community among their residents.

The second full month of school was packed with some of the best moments of this semester. Starting at the beginning was homecoming, which I’m sure was as awesome for most of you as it was for me (check out my blog post about homecoming from October!). There was the parade and bonfire, tailgating and a winning 59-19 football game—and it was all Harry Potter themed! Moving forward from homecoming, October also brought the return of hockey for the season! Although the games may not have all been

The Wildcats host UMich for two nights back in October.

winners, there were some great games to watch and be in the Cat Pack for! Speaking of hockey, October was when Hockey East got a visit from the Big 10 as UNH took on Michigan for a weekend of competition on and off the ice. While the Wildcats skated their hardest in an attempt to beat the Wolverines, UNH Students participated in the social media battle of UNH vs UMich—winning overall and showing that we have more spirit! October also brought us Family Weekend, the Red Sox winning the World Series, and Halloween (which you can read about here, here, and here).

Ah, November… it feels like just yesterday. Oh… that’s because it was. Well, it was only a few days ago! Time sure flies when you have all of those days off early on and then most of a week for Thanksgiving! November, although it seemed quite short, brought some inspiring moments as a 9/11 survivor gave a lecture in the Strafford Room and made us laugh with events like kayak basketball. The International Food Luncheon, which really influenced my life since I lived in the dorm hosting it, took place at the end of the month and was a great success than the two previous years! With more than twenty dishes from around the world, IFL was a hit for everyone (and super delicious!). And lets not forget about 1000 thanks, the second annual event in which the UNH community comes together to thank our sponsors!

The UNH Astronaut and Wild E. Cat at 1k Thanks back in November.

And with Thanksgiving now over and most of the last week of classes done as well, there isn’t much to say about December. This Friday brings us stress relief followed by the big UNH vs BC hockey game on Saturday! And while you could slack off this weekend, remember that finals start Tuesday (or Monday night for some unlucky students) and then it’s back home for five weeks! Time sure flies when you’re having fun in Wildcat Country!

So good luck on finals and look forward to break (or at least all of the fun that spring semester will bring)!

Looking for more memories of this past semester? Check out all of our blogs here at UNH Tales and check out the UNHStudents Instagram!