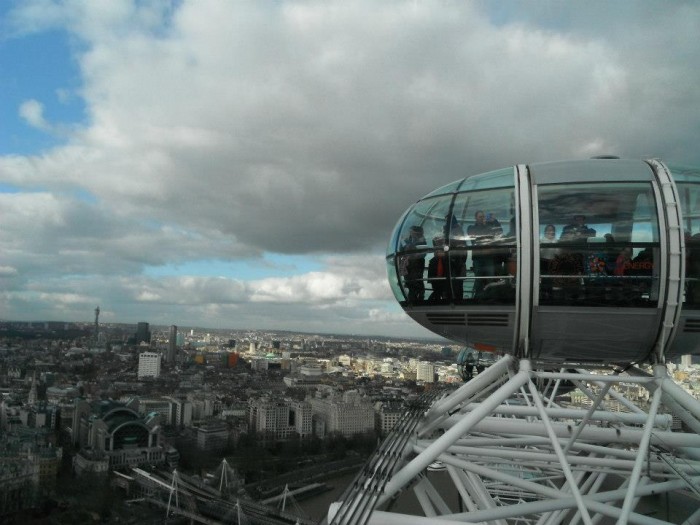 Hi everyone, I hope you’ve been having good weeks wherever you are! This week in London has been full of touristy activities.  On Friday we decided that since we hadn’t ridden the London Eye (the giant observation Ferris wheel) yet we were due for a trip.  The Eye is one of the biggest tourist attractions in London, and every time we walked by it we said that we needed to take a ride! When Friday dawned warm and sunny we decided it was the perfect opportunity to ride the Eye. Although the weather became cloudy by the time we actually took the tube to Waterloo station, the day was still warm and the boardwalk in front of the Eye was full of street performers.  After watching them for awhile (and paying an absurd 50 pence to use the bathroom!) we started walking towards the Eye to board.  However, on the way an African man claiming he was from Ghana stopped my friend Emily and said he’d make her a bracelet.  As we watched he made me one too, and since the bracelet had the red, white, and blue pattern of the English flag we were excited about our new pieces of jewelry.  Unfortunately, even though we hadn’t asked him to make the bracelets he charged us four pounds each for them once he was finished! Angry about being ripped off, we decided that we wouldn’t let ourselves be swindled again and headed to the Eye.

Once we arrived at the Eye the experience was much better. Although there was a huge line, clearly filled with tourists from various countries, the line moved quickly and we were boarding our ferris wheel capsule within twenty minutes.  Once we boarded, we were overjoyed at how clearly we could see the city and the fact that we could point out major landmarks such as Big Ben, Westminster Abbey, and Buckingham Palace.  Despite the fact that people have told me London is a “horizontal” rather than a “vertical” city – containing a large acreage of land space rather than having skyscrapers – I didn’t truly appreciate it until I reached the summit of the Eye’s cycle.  From the top, there were buildings as far as the eye can see – houses, churches, office buildings, bridges across the Thames, and interspersed between, parks.  The sight was absolutely breathtaking, and once our ride was over we were already claiming that we wanted to try the Eye again at night.

After riding the Eye we made a pit stop at the Borough Market, an outdoor food market that we’d heard was phenomenal.  One of our friends from school had also said that we could buy grilled cheeses – in London “cheese toasties” – at the market, an American food we’d been craving since our arrival.  After wandering around the market and picking up free samples of brownies, chocolate, cheese, nuts, and various other food items, we finally found the grilled cheese stall, thus fulfilling our mission.  The grilled cheese – made with crispy toasted bread, some kind of delicious European cheese, and buttery sautéed onions – was well worth it and after collecting more free samples on the way out we were pleasantly full and content with our visit.

On Saturday we went on a school-sponsored tour to see Windsor Castle and Hampton Court.  Windsor was an adorable little town, featuring the castle and the prestigious Eton College (William and Harry went to high school there!) as well as tea shops, cafes, and markets.   The castle, which is one of the Queen’s other homes when she’s not in London, was enormous and ornate despite its stone exterior.  Since the Queen was visiting Windsor on the day we visited, shown by the flag above the castle, there was added security around the town.  We were able to see a changing of the guard ceremony at the castle as well as the grounds of Eton College, so the stop was definitely successful!

Hampton Court was a massive brick structure no longer in use by the royal family.  It was mainly used by the Tudors several hundred years ago, and since it is no longer occupied we were able to explore the entirety of the building.  We walked through the quarters of kings such as Henry VIII and William II, and the extravagant lifestyle they must have lived was amazing to think about.  The gardens, despite the cold February weather, were magnificent in themselves and it was obvious that a large team of gardeners had spent time laboring over the many topiaries and flowers.  After exploring the court we hopped on the tour bus home, exhausted, and came back to Regent’s.  For dinner we found an American Diner that served breakfast all day! I don’t think I’ve ever appreciated a piece of French toast so much as I did that night – after a month of cereal and toast, French toasts tasted absolutely amazing and reminded me of home.

On Sunday most of my friends were feeling the pressure of the upcoming midterm weeks, but since I’d done most of my homework already I took a tour of the National Theatre with people from my theater class as required by our professor.  The theater is surprisingly ugly from the outside, and the tour guide explained that the brutalist concrete building was constructed in order to prevent the audience from being distracted by the details of a more ornate theater.  The interior is similar and has minimalist decoration, but after seeing the Captain of Kopoenick at the theater the week before I knew that the productions were by no means minimalist.  After receiving a behind-the-scenes tour of the incredible amount of work that goes into the lights, sound, set design, acting, and various other aspects of their plays, I was glad that my professor had assigned such a project and felt a much greater appreciation for the subtleties of theater.

The school week held a lot of essay writing and homework, but I was able to meet up with my cousin Lily (she’s here for the week on a school trip) and spend an afternoon in the Camden Market/Regent’s Park area.  We had a great time and it was nice to see a familiar face in London!

I saw a play at the Camden Roundhouse theater on Tuesday night.  Although the play was quite disturbing and had some offensive subject matter, the venue was extremely interesting.  It was staged in a converted roundhouse train station, and since the play took place in the middle of the “arena” on the rounded stage, we sat around the outside as an audience in order to see the action.  This was the fourth play I’ve seen in London and I’m so happy to have the opportunity to visit the theater for class!  I also booked a trip to Scotland for next weekend (February 28th-March 2nd).  We’ll be taking a bus from London to Edinburgh, and although the trip is nine hours each way, it is very cost-effective and Scotland is supposed to be a beautiful country.   Even more exciting is the fact that I’m headed to Dublin tonight! I will head back to London on Saturday night in order to be back for classes.  This will be my first weekend trip out of London so I’m very excited and I will give you the updates next week! Thanks for reading!