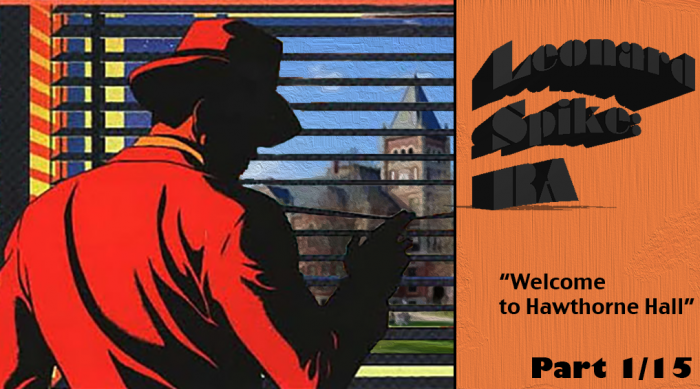 NOTE: The following is part one of fifteen weekly posts by Tom Spencer ’16. It is a creative writing short story broken up into 15 chapters. This story is fiction, which is the creation of a story from the author’s imagination, and is not based on real events or people, though it may reference real events or people.

I go by Spike.

That’s the last name on my driver’s license, but the tag on my door’s got an extra bit: Leonard Spike: RA. I’ve got a single in Hawthorne Hall, and tonight my door’s cracked open an inch. My feet are up on the desk, and I’m reading TNH. I’m hoping to relax, but when there’s a knock on the door my gut tells me that’s not gonna happen.

It’s Vivien, the RA from across the hall. “Hey. I hear there’s um. Someone swimming in the bathroom.”

I toss the paper on my desk and go. The inside of the bathroom has a big hollow echo. It’s humid in here. There’s water running from the one full-sized bathtub. The tub is in this square stall behind the showers. The yellowish curtain is swept back, and there’s a huge puddle seeping out of the stall.

There’s a resident in the puddle. He’s only wearing his basketball shorts, and doing a backstroke in the inch or two of water the step has allowed him. The tub is overflowing, and water slips down the side in a greenish waterfall crested by a thin soap-suds skin.

It’s too generous to call what he’s doing a backstroke. It’s more of a bumping slopping scuffle, heels and elbows lifted and slapped against the sopping tiles, yet his face is so serene you could picture some Caribbean lagoon in his head. Droplets leap up and soak my pants at the knees.

He gives a panicked sputter, and opens his eyes. They’re bloodshot and hazy.

He gasps like he’s just been plunged into ice water. “RAs! Gotta…swim away.” He curses, and rolls over to do a front crawl. His ankle kicks the tub, and he yelps in pain. Soon he gives up and sits against the wall, breathless. “Am I in trouble?” he mopes.

I notice there are empty liquor bottles and baggies filled with crushed leaves bobbing in the tub water. “Yes.” I answer.

“Hey, can you do us a huge favor?” asks Viv sweetly.

“Anything for you,” he answers pathetically.

“Can you shut off the water and pull out the plug?”

He brightens “Yeah! I can!” He flops to the faucet like a seal, and though the handle slips once or twice in his fingers, he does shut it off. The water trickles to a steady drip. He begins to fish for the plug while kneeling at the side of the tub.

He slips, and dips head first into the tub, and starts struggling. Bubbles gurgle up from the water around his head. Viv and I glance at each other- then I step over and yank his water-logged shoulder. He comes up smiling, hair filled with soap, and holding the drain plug. “Found it,” he cheers proudly. “Do I get to keep it?”

The water gargles down the drain.

After I’m done with the incident report, and the staff finishes swapping stories, I return to my room. That swimming guy was one of a few honors students in Hawthorne, but he wasn’t the first one to go nuts like that. Some of the most studious people I had ever met were suddenly losing scholarships and risking eviction over behavior like this. The last people you’d expect. I thought I was imagining the pattern, but then a few nights later I get a complaint about a roommate.

Newer PostWildcats Love Wild Kitty!
Older PostUACC Is The Place To Be!