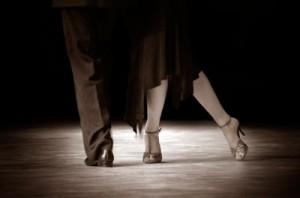 NOTE: The following is part 4 of fifteen weekly posts by Tom Spencer ’16. It is a creative writing short story broken up into 15 chapters. This story is fiction, which is the creation of a story from the author’s imagination, and is not based on real events or people, though it may reference real events or people.

What can you do? I’ve got classes like the next student. I’ve been keeping a sharp eye out for Lauren’s roommate, but it’s like Lauren says: she’s scarce. It’s not long before it’s time to go to the MUB.

I stand across from the pool hall, and watch a few students play. One of them’s all right at the game- I wouldn’t want to play him for money. Through the wall, Frank Sinatra music is swinging softly. Sing it, Frankie.

I look up and there’s a girl standing there in a red dress. She’s got one hand on her hip and she nods towards the door next to me. I look back and see the Hepcats Ballroom Dance club is holding their meeting in there. They’re practicing to Frank Sinatra. Well, she didn’t make the offer in a way you turn down easily, so I followed her into the studio.

The music is going, and she takes my hand. We start a steady swing step. “So. You a club member?” I ask. She does a spin and catches my hand again.

“I’ve never been here before in my life.”

I’m not sure I believe her. It’s my style to cut to the chase, so that’s what I do.

“You wouldn’t happen to be a friend of Pete, would you?”

She cocks her head sideways to knock a dark curl away from one eye. “Who?”

“Well why didn’t you say that in the first place?” she asks. She’s got a glint in her eye, and I know she’s giving me a hard time. We do a dip.

She giggles, and suddenly I feel a piece of paper in my palm. She spins away from me, and I’m left standing there alone. I unfold the paper, and read it. This is definitely a guy’s handwriting, gross chicken scratch cursive. “Thorns @ 9,” it says.

I hold it up to her. “What’s this about?” The door to the studio is closing. I look around, and she’s gone. I bolt out the door, and look in the poolroom. Nothing. Outside on the balcony, I watch to see if I can catch where she went. Nothing. What a disappearing act.

Something had come from Pepsi’s tip, even if I didn’t understand it. I’m walking back, and soon I peel back my shirtsleeve to look at my wristwatch. 9pm. A funny idea hits me.

I could be back at the hall in under five minutes. I was just worried I would miss whatever this thing, whatever it was.

Back at Hawthorne I walk around to the side door that isn’t used as much. There’s someone back there.

It’s a figure in a hoodie who shoves his hands in his pockets, and walks towards the door a little too quickly. He’s got a big duffel bag on his shoulder, and he can barely walk because it’s banging against his legs heavily. The bag is canvas, and black. I can hear glass clinking from here. He takes out an I.D. to swipe in. That means he lives here, which makes him my problem.

Next episodes of Leonard Spike: RA…

Newer PostLessons Learned Outside the Classroom
Older PostWhat I Do: Undergraduate Research