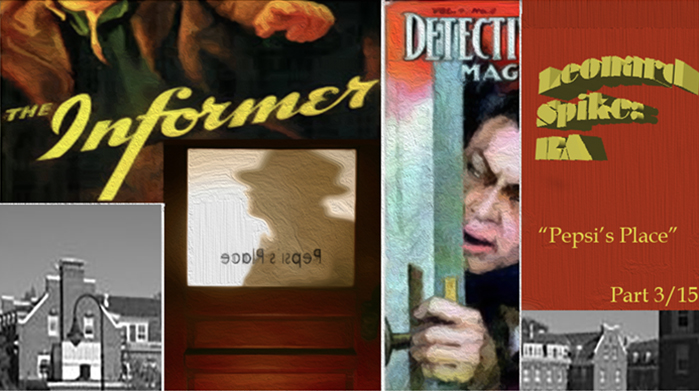 NOTE: The following is part 3 of fifteen weekly posts by Tom Spencer ’16. It is a creative writing short story broken up into 15 chapters. This story is fiction, which is the creation of a story from the author’s imagination, and is not based on real events or people, though it may reference real events or people.

This work is mostly waiting for the perp to screw up. When I’m looking into this kind of thing, I start with my buddy Pete, Pete, who goes by Pepsi. Pepsi’s not a bad kid. He owes me one because I put in a good word for him back when he almost got evicted. Granted, it was me who busted him in the first place, but he knew the rules. Besides, that wasn’t personal- I’ve just got a job to do, that’s all. Pepsi got to keep his housing, but now he’s on probation.

I walk down a flight of stairs, take a left and I’m at Pepsi’s door, right across from the men’s room. He waited two years to snag this one- The Best Room in the Joint, he called it. Never a far walk to the can. The sign on the door reads “Pepsi’s Place.” I hear music pumping through the door, so I rap on it with my knuckles.

“Spike. Open up.” He owes me one. He knows that, and soon I hear the shing and clunk of a metal bolt sliding back. Pepsi’s got a Boston Red Sox cap pointed backwards, and to the left on his head. It’s pushed down over a curtain of swirled brown hair. He opens the door wider, and floats up a palm head-height, fingers dangling down to greet me.

“Spike, my man. What are you snooping around here for? I don’t remember having any fun lately. What is up?” and his hand shoots down. I clasp it in a sort of handshake, and walk in. He pulls up a linty purple beanbag, and kicks one to me. We sit, and Pepsi turns down the music so we can talk.

“Drink?” he offers, and reaches under his bed. He takes out a blue soda can and holds it out to me.

“Not while I’m working. Listen, I’m looking into something going on in Hawthorne that’s up your alley. Recreational chemicals. Any thoughts?”

Pepsi claps his hands and gives a big grin and laugh. “Spike, baby,” he says “you know I don’t recreate anymore.”

“Maybe I do. But friends are friends, and friends talk. Whatcha been hearing, Pepsi?”

He shuffles, and tries to laugh this one off. He thinks it’s him I’m after, but it’s not. Pepsi was just a user back in his day. He never distributed and he never advertised. Just wanted to have a good time himself. Still, he knew who was who out there.

“For the roof over your head, and the walls holding it up.” We had to do this barter thing every once in a while. “Whaddya think, Pepsi? Know any botanists you wanna talk about? Who’s catering for 4th floor?”

Pepsi pretends to think a minute, and shuffles his shoes. He tugs at his sock. “4th floor, huh? Yeah. Yeah that’s jogging my memory, you know? Listen- sometimes you don’t get a name, but you get where to be and when, you know?”

“Spike, baby. We all gotta pay for our textbooks somehow.”

“Yeah- you’re a regular scholar, Pepsi. We all know that. Now tell me what you’ve got.”

“K. You know the MUB poolroom?”

“Be across the hall from that in two nights.”

“Gotcha. Anything more for me?”

“I do Pepsi. I’ll write the Vatican to get you sainted tomorrow.”