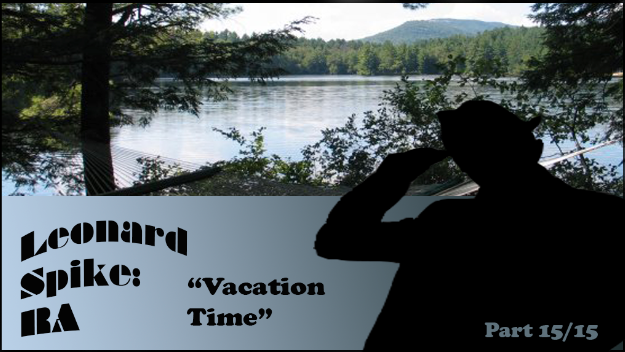 It’s warm enough to open the windows. I write that character reference letter I promised Cliff. The Ostrich let Cliff twist in the wind when he was in trouble, so that was a serious blow to Cliff’s loyalty.

Cliff was more than ready to help me set up that sting. It was a simple matter of asking that the next delivery to Austin coincide with the fire alarm test, which we had not passed yet. That email Viv showed me was information about when the drill would be. It was only sent to the RAs and hall director.

That girl in red was still out there, but I hear from Cliff she’s keeping a low profile with the Ostrich under wraps. Another day.

Ran into Cliff one more time as he was moving out. He said “Yo Spike! What’s your major? Criminal Justice? Poetry? What is it, huh?”

“Both,” I sneered. “I’m a poetic justice major.” Then I shrugged my jacket on, and walked off under the street-lights. Summer’s on the way.

Thank you to all who have read, especially those who made it this far. Also thank you Dashiell Hammett, and Raymond Chandler, for all they have given us in terms of tough-guy talk, dangerous dames, and superb stories.