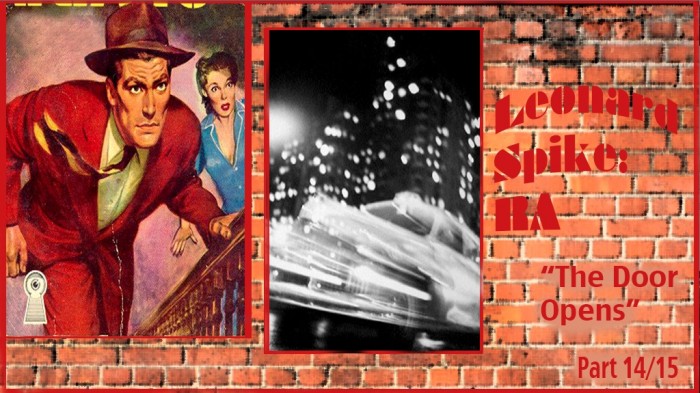 I’m crouched outside the door with the Ostrich on the other side. The fire alarm is blazing and howling.

The door opens, and I’m ready. I shove it open all the way, and jam a door-stop in the crack. I give it a good kick to get it stuck good and tight in the doorway. The Ostrich doesn’t know me, but the other guy does. He swallows, and curses. He says to the Ostrich “Run.” The Ostrich panics, and grabs his bags of goods. He’s worried he’s going to miss the crowd, and be too visible.

I give my most gentlemanly bow, and let them out the door. They brush past me, and the Ostrich gives me a petty elbow to the ribs as he goes. Boney guy.

I can see his tall figure bobbing through the crowd, bowling people over with those big bags. I fight my way through to keep an eye on them. Now it’s time to make a phone call.

I’ve made my way to a window, and I see the Ostrich’s car by the curb. I tell the police on the phone there are two kids with drugs about to get in their car and drive. I describe the Ostrich’s vehicle. Sure enough, the two perps are out the door by now, bolting for the car. The Ostrich runs with lanky, jangly steps. His buddy is puffing along side him.

I crane my head to see what’s going out the window, then bolt downstairs.

When I get down, the last of the students are flooding out of the door. There are red fire truck lights spinning against the walls of the building. The Ostrich’s tires squeal, and he rips out in the direction of the exit by the horse stables. I pass that on to the cops.

The Ostrich is speeding and honking at apathetic pedestrians. Soon the pedestrians leap out of his way as it becomes clear he’s not going to stop for them. He blazes past a stop sign before I hear police sirens amid the fire trucks and alarm. A blue and white cruiser pulls out of the side street ahead of him. The Ostrich crashes his car into a telephone pull when he tries to swerve away.

I sprint to see how this thing goes down. I make it in time to see the Ostrich and his buddy getting out of the car, splitting up, and running in opposite directions, hoping to evade the police.

Two cops get out after them, and one calls for backup. I follow the whole thing from a distance. Another car blocks the path of the toady, and the two original cops grab the Ostrich. They walk them back past me, and the Ostrich glowers at me hatefully. I grin, tip my hat to him, and walk back to Hawthorne.

The final chapter of Leonard Spike: RA will appear next week. In the mean time, thanks to all who have read. Best of luck with finals, and have a wonderful summer.