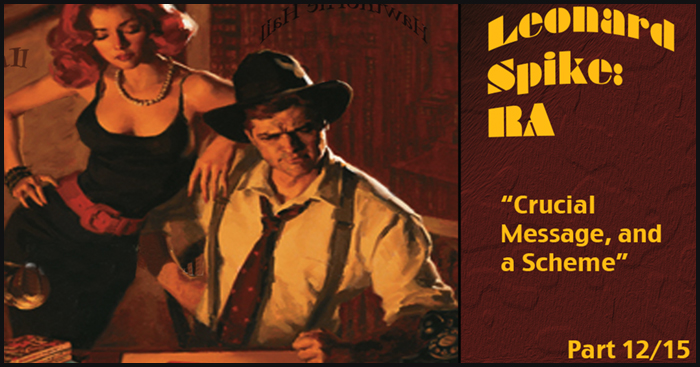 NOTE: The following is part twelve of fifteen weekly posts by Tom Spencer ’16. It is a creative writing short story broken up into 15 chapters. This story is fiction, which is the creation of a story from the author’s imagination, and is not based on real events or people, though it may reference real events or people.

The next night I was on desk duty with Viv. I had my feet up, and I was thinking about how to snag the Ostrich. Viv says “By the way, one of our ressies is in serious trouble.”

I sit up to listen. I’d almost forgotten about her. “What’s up?”

Viv looks around. She doesn’t want to embarrass one resident in front of the others. “She was found in another hall’s lounge, like unconscious. She’d thrown up too, and the RAs there had to call the EMTs. I haven’t heard what happened to her yet. I mean- I heard she was going for a full ride! What a shame.”

I nod, but inside I’m boiling. The Ostrich strikes again. I imagined him out there, mocking me.

“Did you see this email from ResLife?” she asks. I shrug and shake my head. I don’t really care about anything besides stopping this guy at this point.

She tilts her computer towards me. At first I can’t imagine it is anything important. As I read it, I decide I was wrong. In fact, the ghost of a plan starts to roll around in my head.

“Thanks Viv. Good to know.”

The next day, on the way back from class, I see Cliff by the side of the road. He’s wearing an orange vest, and picking up trash with a poke stick. I grin and walk up to him. He sees me, and looks away quickly.

He shrugs, and looks daggers at me. He doesn’t answer. I say “Look, I kept up my part of the deal that night. I don’t know how you got here.”

He slouches, and drops his trash bag. “Well that morning, when we were going home? We didn’t know it, but we woke up still blasted. Cops picked us up and now I’ve got community service.”

“Yeah. Sure you are. They’re looking at taking my housing and financial aid package now. This is all your fault.”

“Mine? Sure, we can kid ourselves if we want. Look, I know from experience a character reference can really help, especially from an RA.”

He squints, and cocks his head at me. “What’s in it for you?” he asks.

“Well, Cliff. It’s like this: I want to buy some pot.” And his eyeballs just bug right out of his head.

Newer PostIt’s Not About the Time, It’s About the Finish
Older PostMy Visit to the UNH Commencement Fair