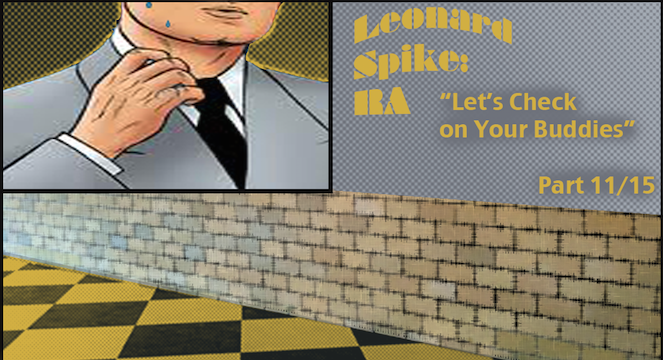 NOTE: The following is part 11 of fifteen weekly posts by Tom Spencer ’16. It is a creative writing short story broken up into 15 chapters. This story is fiction, which is the creation of a story from the author’s imagination, and is not based on real events or people, though it may reference real events or people.

Back upstairs, I find the bathroom is actually repaired. In fact, it’s tough to tell there was ever any damage aside from some ceramic shards and white powder beneath the soap dispensers. The dispenser works fine when I test it.

Cliff is nodding hopefully, and his friends are staring at me wide eyed, waiting for me to do something.

“You guys aren’t quite off the hook yet, you know. Maybe you took care of the property damage, but you’ve still got potential internal possession charges headed your way. That’s never good.”

They shrug, and Cliff snaps at me “What happened to ‘I scratch your back, you scratch mine,’ man? You said!”

“Yeah well, I don’t think we’ve made a fair deal yet. You see, you fellas would be getting off real soft at this point, and you have to make that worth my while.”

“I know there’s you, the girl in red, that kid who’s 21, and your boss. Anyone else you’re…associated with?”

They clam up again. Time to turn up the heat. “Fine. I’m calling the cops.” I take out my cell phone.

“Thanks fellas. By the way, sooner or later I’ll know if you’re lying. If you are, there’ll be no mercy for you next time we meet.”

“Yeah, cry me a river pal. You knew the rules when you got here.”

So here’s how it wrapped up: I told them I’d look the other way while they crashed in the lounge. They were too blasted to get home safely. Then I told them if I ever saw them in Hawthorne again there would be big trouble. They were pretty ready to help me out after the huge break I was giving them.

In the long run, this was the way to go. You can shear a sheep for a lifetime but you can only butcher him once. I’d sheared these guys for some pretty good info. I rubbed my eyeballs, and returned to my dorm.

I wrote down what they had told me in my notebook, then flicked off the light and went to sleep. Tomorrow I could think about how to snag the Ostrich.