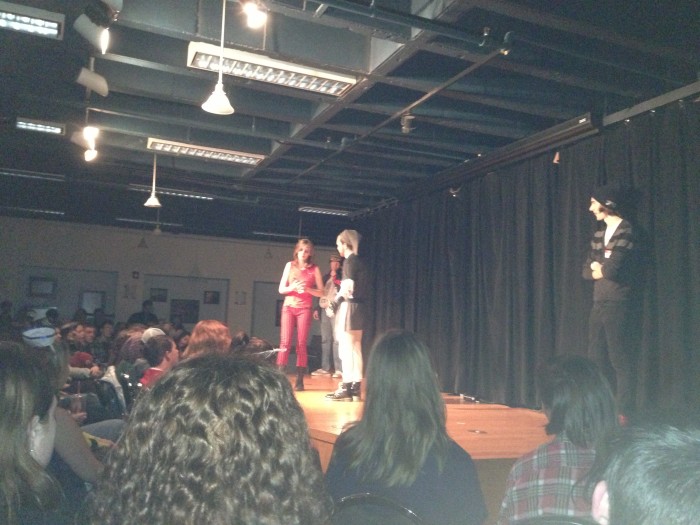 Thirty students are sitting shoulder-to-shoulder in a cramped hallway in the basement of the MUB. They have been camped here for hours. The students are in groups of friends, and they are intent on defending their place in this line. They send corsairs out to re-supply their encampment with coffee or food from the Union Court. They are waiting for the large doors at the end of the hallway to swing wide, and welcome them in. It is only 7:30pm.

By 8:00pm, the head-count has more than tripled. There is still an hour to go before the doors open. You’d better get here soon if you want that seat we saved you, students advise absent friends through text messages or phone calls. The line only grows. At last, the doors open and the rush inward calls to mind the result of smashing a submarine’s window.

As if the competition for limited space wasn’t enough, there’s deafening dance music thumping through the small auditorium. Every seat has been filled, and the walls are lined with students happy for standing room as long as they get to see the show. Then out of nowhere, the music splits mid-bar, and one of the evening’s hosts leaps on stage. He lifts his hands to quell the applause and chatter, and welcomes the crowd to Improv Anonymous: UNH’s only improv comedy troupe.

And at that moment, the scripted part of the evening ended. Improv Anonymous relies heavily on audience participation. They will perform scenes with minimal information, and what information they do have will be generated by the audience. Where are we standing, the performers ask?

Someone shrieks “Santa’s workshop!” “Stoke hall”, shouts another. “A Turkish bath house,” someone else pleas. The performers light up at the possibilities there. They agree to perform scenes from a Turkish bath house. Somewhere in the crowd, the friends of the guy who suggested that one are slapping his back and congratulating him. He was fellow creator of the impending hilarity in a small way.

Yes – for the next few hours, the anxiety of impending exams, grades, jobs, relationships, the political, social, and economic turmoil you were born into and must face soon after graduation, the existential emptiness of life (if you’re into all that) or whatever else all gets washed away in waves of joyous belly-deep laughter at the absurdity, the shamelessness, and the spontaneous inventiveness of the Improv Anonymous cast.

If you are a fan of shows like Who’s Line is it Anyway, this is an opportunity to see that type of performance live, and from students like you. They’ll be playing quite a few games you may know like Scenes from a Hat, or Party Quirks. The show is free. It’s just one of the benefits of living at UNH that you may not have been aware of. Make use of this opportunity some time during your stay here.