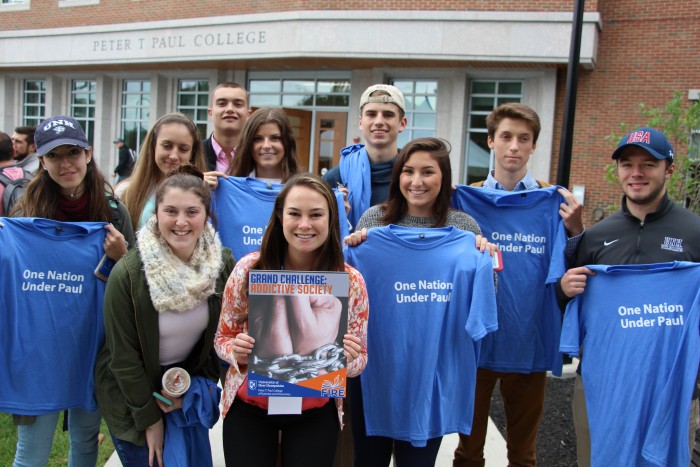 As a second year peer advisor and student head of this year’s FIRE program, I am proud to participate in the growing effort to actively engage Paul College students; a program launched during my junior year at UNH. From the start, we immediately knew that the new program had the potential of becoming a valued resource and learning experience for first year students. We had difficulty differentiating what this value would ultimately be.  From the student’s perception, it was a chance at winning $500. Little did they know the experiences they would have along the journey they were about to embark upon.

I enjoyed my freshman peer advising class back when I was a first year student, as it allowed me to have close friendships with students that I had multiple classes with and it connected me with an
upperclassman. However, I did not find myself closely connected with the peer advisor since he was just another teacher in my eyes. The new program allows peer advisors and first year students to form closer relationships since there is a stronger push to be involved outside of the classroom. Most of the time, outside of classes is where the strongest connections are made.

Last year, I found my students were very comfortable reaching out to me and we spent a lot of time together. I would meet them for coffee, get dinner at Hoco with them, or even hangout with them at meetings for various clubs we were both members of. There was a much higher degree of outside-the-classroom interaction which really helped me get to know each one of the students. My group loved going to the sporting events offered as point opportunities, for example, the dodgeball tournament. I saw a completely different, and very competitive side of some of my team members at that tournament that I never would have seen in the classroom. Last November, a few of my students signed up to do the UNH Serves volunteer day and it

ended up being terrible weather. I was really impressed by the fact that my students still showed up and made the best of the day of service with me. We had some great laughs and I really got to know the students better. Getting to know the students’ characters was key in deciding what each student’s role would be at the FIRE Undergraduate Research Conference at the end of the year and honestly, I think it’s the reason why we ended up coming in first place! By the end of the year I knew them each so well that we were able to give each student a role that best fit their personality and talents.

It wasn’t always so simple to connect with the students, however. In fact, the first few weeks of the program were a bit shaky. The introduction of a game structure, in addition to related coursework was complex and difficult to explain to the students at first. The ultimate goal was to have students earn points based on their involvement throughout the year and their research assignments culminated in a presentation at the URC in the spring – simple right?

Well originally, when we developed a “game structure” we intended that it be rather covert in order to build suspense and also establish a sense of urgency. We realized quickly that this wasn’t the case after meeting with the first year student respondent group, referred to as “the Igniters”. Many students became frustrated since they were unable to plan for spontaneous events and peer advisors had a hard time effectively communicating with students about the tasks ahead. Some students lost interest because they felt their efforts were not productively working towards an end goal. We considered this when structuring the second semester FIRE plan. The Igniter group provided critical feedback to help shape the program.

As I look back on last year’s program, I realized the students who were on board and trying to improve the program were very talented. Thanks to the efforts of these students, peer advisors and faculty members across campus, the year concluded with a first-year URC performance level equivalent to graduate student projects and thesis presentations.

Returning as a second year peer advisor and senior, I can confidently say that the uncertainty we faced last year has been eliminated. This year we have experienced a greater number of students “buying into” the goals of the program. Early this year we hosted a dodgeball tournament that 280 students attended which is impressive for an activity that occurred within the second week of the school year. This is a time when schedules are full and many students find themselves overwhelmed simply adjusting to the demands of college.

I am excited to see where this year’s journey takes us based on the success of last year’s program. The teamwork between the faculty, alumni, peer advisors and freshmen participants has certainly helped Paul College pioneer an amazing program that is peeking student curiosity and interests, keeping them engaged, and is catching on like wild[cat] FIRE!