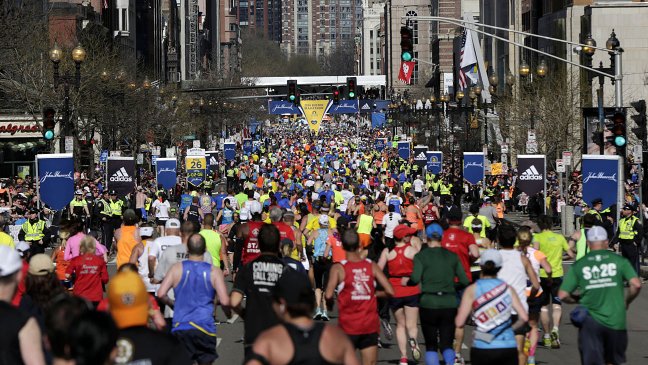 Going to UNH is practically like being a part of the great Boston universities. Practically. And with Boston only an hour and twenty minutes away from campus on the Amtrak Downeaster, why not head down to the city to be a part of something as big as the Boston Marathon? Yeah, most of us have classes on Mondays but this once a year event, as I learned, has a lot to teach everyone—runners and spectators alike. So, in hopes of running into some fellow Wildcats (which didn’t happen unfortunately), I went to cheer on the runners of the 2014 Boston Marathon.

Bag inspection at the Mile 25 marker.

Monday Morning, following my stay at a friend’s dorm at Emmanuel College by Fenway Park, I woke up and headed the couple blocks over towards Kenmore Square. It was obvious as we reached Fenway Park, which is about two blocks from the Emmanuel campus, that this is was going to be a huge event. And on top of the Marathon going on, there was a Red Sox game going on that morning. As my friend and I crossed the bridge over to the Mile 25 marker, the first examples of the heightened security were made very obvious. Check points were scattered about the city portion of the course with people and bag checks to best keep everyone safe. And although there were some audible complaints about this “waste of time,” I personally felt much safer thanks to this security measure. Well, that and the fact that every twenty feet or so there were about fifteen cops ranging from those still in the academy to the special operations unit.

Following having my small bag searched, we continued on from Kenmore Square the couple of blocks towards Charlesgate Park and the “1k Left” point of the race. We staked out a spot near where the runners came out from under the bridge and waited for the first athletes to make their appearance. During the hour we waited for the first of the para-atheletes, friends were made with those around us. A woman to our right was cheering on a friend who was attempting to finish the race this year after not being able to in 2013. A family from Missouri behind us, consisting of a pair of grandparents and a baby, was waiting for their son (the baby’s father) to run by. A group to our left was cheering on some coworkers running. The atmosphere around us was unbeatable in its warm and friendly state. And as a group of spectators with our own personal cop, we kept everyone up to date on the race through text messages, twitter, and the Marathon app. We enjoyed the race as a group of strangers and worked to help find friends and those most known in the racing community.

As 10:30 came and went, the first of the para-athletes passed us by. I was in awe as I watched the first, second, third, and so on

A National Guardsman stops to cheer on a runneer.

wheelchair races go by us. These athletes were going the 26.2 miles from Hopkinton, MA to the finish line on Boylston Street in Boston by only using their arms (And here I am making excuses about going to the gym!). Even more inspiring where the National Guardsmen who began their run of the Boston Marathon at 6:30 that morning! Wearing their camo and heavy boots, these men and women brought the crowd to a frenzy with each pass. These two groups were almost inspiring to watch in this Marathon setting and really made me think about everything they had to do to get to this point.

Around 11:50, the first of the elite women began to run past us with about forty second gaps between the first seven in the race. In this group was the city favorite, Shalane Flanagan who came in second for the 2013 Boston Marathon. Starting out with the prediction of coming in first,

Flanagan fell behind at “Heartbreak Hill” and ended up coming in seventh for the women. Three minutes after seeing Shalane, word was received from our ever informed officer that Rita Jeptoo of Kenya had won the Marathon for the women and set a new record for the race. Ten minutes later, the first of the elite men ran by which lead to the finish of the year: Meb Keflezighi, the first American to win the Marathon since 1983! With these athletes completing the race, a thought occurred to me that had started formulating as the para-athletes began go by: it isn’t about the time it took you to get here, it’s about finishing

With the attacks on Boston during the 2013 Boston Marathon, it was widely known that completing the race was what was most important for this year. Yes, of course, there is a need to be the fastest and to beat your personal best. But just completing the race…. You could see the looks of accomplishment, of success, of pure happiness as you watched the runners around the city with their families. Even as they passed us with one kilometer to go, you could just see this look on their face. They were finishing this, one way or another. Finishing is what is most important. And this is a lesson that I think can be applied to college (this is a look at college life and such blog afterall!).

Many of us go into college not knowing what to expect. We know that to get a degree, it is going to take time. College is a marathon that you need to run in order to make a better life for ourselves (ignoring all the debt you rack up over the course of that “marathon”). But what I think a lot of students forget is that it isn’t about how quickly you get through college but just finishing. You can be here for four years straight through and get your degree and be able to go out into the world. Or you can do what you need to do to finish with stories to tell, a degree in hand, and an experience of a life time.

I’m going to leave you all with my three favorite pictures I took at the Marathon, and I think you’ll know why!