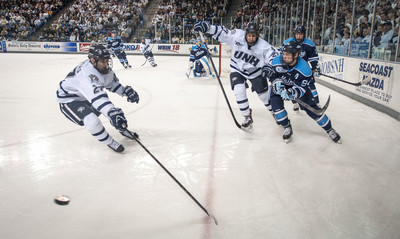 The UNH vs. UMaine hockey game is one of the biggest events on campus during the fall semester. Student tickets sell out within the first two days of availability; white UNH shirts become a bit more difficult to find; and you really start to think you should have stocked up on blue and white face paint at Halloween. This is the chaos that comes with the annual White Out the Whitt Game. No need to worry though if you’ve never been, here are five easy steps to preparing for your first Wildcats vs. Black Bears hockey game!

So the student section is known for our chants. They go through some changes every once in a while, but there are a few staples that the Cat Pack Captains lead. Here are just a few…

When the referees skate out before the game:

Their whistles are stuck and their eyes are closed, what they call nobody knows

When the opposing team comes out and the student section spots the goalie:

When the puck is dropped at the start of each period and after a UNH goal:

When the opposing goalie is in front of the student section during the first period:

When our goalie, currently Danny Tirone, is in front of the student section during the second period:

Hey Tirone, we’re all behind you!

When the opposing goalie is across from the student section during the second period:

And it wouldn’t be a UNH sporting event without this chant:

I Believe in You!

I BELIEVE IN UNH!

And while all these chants and others are going on, you may just see the infamous first goal fish being thrown out onto the ice when UNH scores.

For more chants, check out the pep band’s chant bible.

Wearing white is probably the simplest thing you can do for this game. It is the White Out the Whitt game, after all, and you will get weird looks if you don’t come decked out in white. So grab your favorite white UNH gear and head on over to the Whitt for this sold out game! How else is our student section supposed to look this good?

Learn more about White Out the Whitt here:

You might want to sit most of the day leading up to this game, because you will be standing all night– both because that’s what we do in Wildcat Country and because you’re gonna be on the edge of your seat as the Wildcats take on the Black Bears, the biggest rivalry in Hockey East. If you haven’t been to a UNH sporting event before, be forewarned that we stand through each period of a hockey game and you can only sit during intermissions or long play reviews. That’s it.

The puck drops at 7pm which means you want to be at the Whitt around 6pm at the latest to get the best seat possible in the student section. Plus this gives you an hour to take in all of the excitement that is UNH Hockey.

Be proud that you’re a UNH Wildcat! Rub the ‘Cat’s nose on your way in. Send some snapchats of you and your friend to UNHStudents. Participate in the chants, even if you don’t know them. Show off why we have the best student section in Hockey East, and arguably in the NCAA for hockey.

I BELIEVE IN UNH!