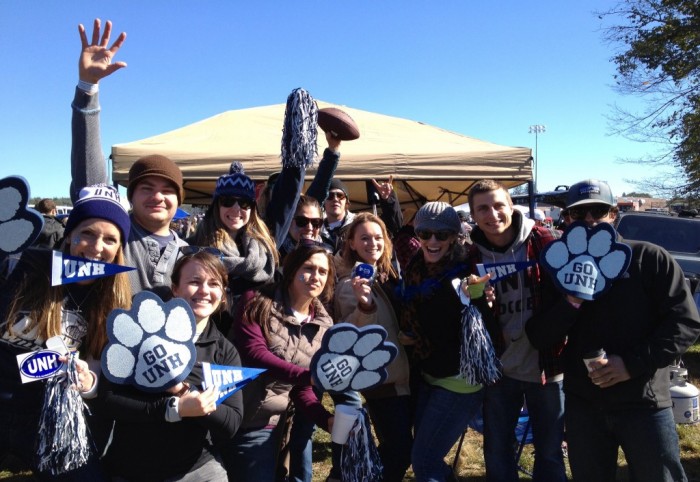 UNH celebrated the time-honored tradition of homecoming this past weekend, and I was tasked with diligently covering the festivities. For me, the annual campus holiday kicked off late Friday afternoon with a parade, barbecue, and bonfire – and while the events were fun to attend, I yet again showed off my brilliant clairvoyance by forgetting to bundle up well enough. Even a cold-blooded Vermonter like myself was shivering by the time I got to Boulder Field.

Once there, I feasted on cider, chili, grilled sausages, barbecue chicken, and – most of all – the pumpkin spice donuts. L.L. Bean showed off their odd “boot-car,” a Stephen Tyler impostor (along with the other band members of “Red Sky Mary”) performed, covering many songs by AC/DC and the Rolling Stones. An infinite number of students were huddled together by the bonfire like emperor penguins in a blizzard. Unfortunately, the fire was made of many tiny logs and embers and not enough cans of gasoline and ten foot tall flames. Needless to say, the food was tasty, the atmosphere was electric – despite the loathsome weather – and there was a man and his goat leading a two-person (or two-animal) mosh-pit. The already-interesting night got even better, as the UNH Men’s hockey team handily defeated Saint Cloud State University 5-3 at the nearby Whittemore Center Arena.

At 7:30 AM the following morning, more than a thousand half-asleep, half-excited, and half-grimacing students – far more ambitious than I – were drawn to Boulder Field for the much anticipated UNH Tailgate 2012. It was barely 40 degrees by about 10 o’clock that morning, but much to the appreciation of all in attendance, the sun emerged and warmed everyone up as the event progressed. I even wound up with a minor sunburn, but that should probably be mainly attributed to my pale Irish complexion more than anything. Throughout the day, dozens of hawk-eyed police officers warily weaved in and out of the various trucks, minivans, grills, and makeshift picnic tables. Students were euphoric, delicious food and refreshments were consumed, trucks were jumped on, and a walking six-foot hoagie posed for hundreds of pictures with students, staff, and family members alike. To cap it all off, the UNH football team fought for a nail-biting 44-40 victory over the University of Richmond.

At that point, once the game had ended and the tailgating had mellowed down, homecoming weekend had officially been deemed a success. But the events didn’t just stop there. Any of the 1,000 students that migrated to Young Drive in Durham, NH after the game were fortunate enough to participate in some added entertainment. Armies of small, ruthless rubber duckies were distributed amongst the rabble. Not surprisingly, when this large group of rowdy, fun-seeking young adults were handed small, rubberized projectiles, chaos ensued. And by chaos, I mean a wide scale “rubber ducky war” broke out, as the adorable rubber animals were turned into squeaking missiles of mass destruction. Predictably, as should be expected when a thousand people simultaneously violate fire-safety laws, the police arrived to clear out the area and maintain a safe environment.  Countless numbers of students, armed with rubber duckies, backpacks, and Ray-Bans flocked down main street in search of a suitable new home. The day shall forever be known as “The Homecoming Exodus of 2012.” Somebody find a Durham or UNH archive book and write it down! Be sure to cite me as the expert witness and historian…

All in all, homecoming weekend was a success. The hockey team won another game on Saturday night, bringing the “major sports team” weekend record to a resounding 3-0. And on Sunday morning, celebrators from all walks of life woke up, crawled to their nearest remote, and tuned the TV to watch some football. Or do the piles homework that they avoided all weekend long. Or both.

So, thank you UNH, for putting on an entertaining holiday weekend. Thanks for being safe, for being smart, and for having fun. And be grateful to all the staff members and volunteers who worked tirelessly to make it all possible.