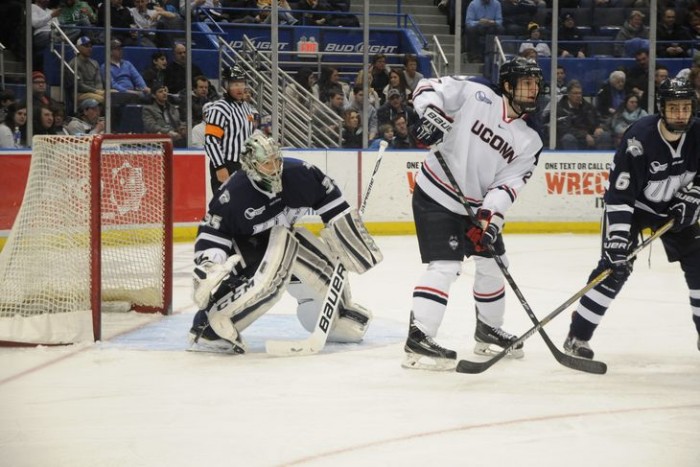 Me and my family at ice level for Friday’s away game.

With all of this snow lately, I thought it was time for a little vacation. To Connecticut. Where they also have snow… but not as much of it. In reality though, this was a weekend getaway that has been on my calendar since Christmas. For any of you who have seen my previous blog posts on UNHTales, you know that I’m an out of state student here at UNH from Connecticut. This of course means that I grew up in Husky territory and have friends at this past weekend’s rival school. From my blog posts you can also tell that I love going to hockey games, as does my family. So, this weekend I decided to follow the UNH Men’s Hockey team to see them take on UConn in my hometown. If you haven’t been to an away game before, it is really a whole new experience when it comes to UNH Hockey.

First of all, it is incredibly strange to go to a UNH game NOT at the Whittemore Center and to not have the Cat Pack leading cheers around you (I really missed the cowbell). It is even weirder to be watching a UNH game in the place where the Hartford Whalers played prior to being moved to North Carolina (Carolina Hurricanes) in 1997, and where I used to watch Wolfpack AHL hockey as a kid. It definitely takes a moment to adjust. Once you do though, you make your own fan section with who you came with and hope for the best. For my family, our best was having seats right on the ice and on the UNH side of the rink. Perfect! Time to cheer on the ‘Cats. And we weren’t the only ones.

Scattered throughout the Hartford XL Center Friday night were dozens of UNH fans sporting their Wildcat gear. My section was

primarily Wildcat alumni with their families, chanting U-N-H whenever the team scored (which they did four times). I was teaching my family some of the cheers from our seats, careful to leave out the fouler ones as there were small children nearby. As I looked across the rink I noticed the group of alumni that are at every home game there doing all of their usual chants and dances. Wildcat pride was in the house and helped make a great game even better — and this game was one of the best I had been to in a while.

The UNH team has played against UConn eleven times prior to this weekend and has never lost to the Huskies. This is the first year that they take on UConn as Hockey East rivals. This winning tradition carried on with two amazing goals in the second and third periods (with the fourth goal being after UConn pulled their goalie). Both teams played a good game but UNH skated better and with more heart, as was noted by a UConn fan sitting next to me. While the teams were about equal and close in the current Hockey East standings (Uconn was tied for 8 with Maine going into the weekend, UNH was 10), UNH pulled together and brought home another win following their defeat of BU over Valentine’s weekend!

This win left the UConn fans quiet and the UNH fans cheering as 6,877 fans headed out into the streets of Hartford. As I walked out of the arena and towards the family car, you could hear the chanting of proud Wildcats: “U-N-H”; “IT’S A GREAT DAY TO BE A WILDCAT”; “LETS GO CATS, LETS GO CATS!” It was truly amazing to see.

If you have the chance to go to a UNH away game, I highly recommend it! Plus it is always great to go to a weekend with a winning sweep for the Wildcats!

Looking for more about the UNH vs UConn weekend? Check out these Hockey East and UNH Athletic reports here, here, and here.