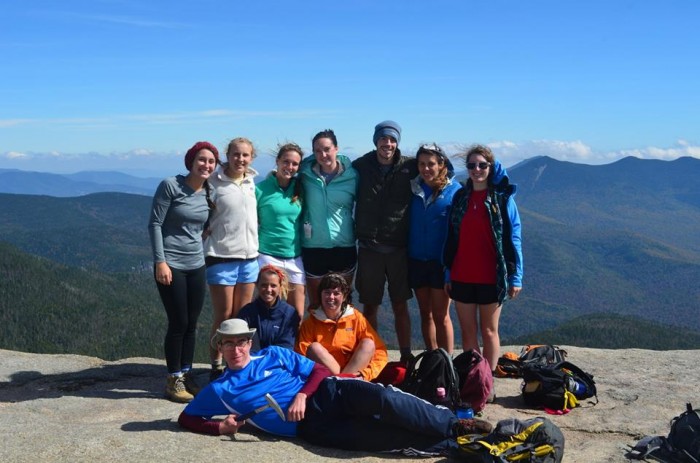 Fall in New Hampshire is a beautiful season. As the leaves begin to change and the weather turns colder, it’s nice to be able to enjoy the natural beauty in which our campus abounds.  For me, the arrival of fall always signals hiking with the New Hampshire Outing Club.  During my freshman year I was a participant on many NHOC trips.  My sophomore and junior years have been spent as an NHOC leader, which I enjoy immensely due to the hiking opportunity it gives and the great people I am able to meet.  So far this fall I’ve led two outing club trips in the White Mountains: one to Osceola and East Osceola and one to Passaconaway and Whiteface.

My first trip up Osceola and East Osceola was known as a “supertrip,” or a trip where multiple groups stay in one of the NHOC-owned cabins overnight and then all branch off to hike different mountains in the morning.  In this case, my group spent the night in Jackson, NH with two other groups.  One group was hiking Mt. Carrigain the next day and one was hiking Mt. Washington.  Once we arrived at the cabin, we grilled hamburgers, cheeseburgers, and veggie burgers for dinner and spent the night playing various games.  My favorite was Mafia, a game where the “mafia” members kill the “townspeople” while the group tries to guess who the mafia members are.  We also played a rousing game of Fantasy, which I can’t explain here because it will ruin the game for anyone who hasn’t played before.

The next day we woke up bright and early to hike Osceola and East Osceola.  I had a great group and they had upbeat, positive attitudes as we ascended two of New Hampshire’s 4,000 footers.  Within New Hampshire there are 48 mountains that have over 4,000 feet or more of elevation, known as the New Hampshire 48.  Many peakbaggers aim to finish all 48 of the peaks, and although I still have about 30 to go I am on my way to reaching all the peaks.

Once we arrived at the summit of East Osceola, we enjoyed wraps and the beautiful view of the White Mountains from a nearby outlook.  Although the peak was wooded, there was still a nice open spot to see the natural vista.  The leaves were just beginning to change and there was an interesting combination of green and orange leaves speckling the landscape.  After lunch, we headed further down the trail to Osceola, which had an even more expansive view of the nearby mountains.  After stopping to enjoy the sights on Osceola we headed back down the trail, ate some snacks we’d hidden for the participants in the van, and drove back to UNH.

Passaconaway and Whiteface the next weekend were similar.  We drove up to Jackson cabin Friday night, but this time only our group slept in the cabin.  The next morning we woke up at 5:30, ate some muffins and bagels for breakfast, and started the hike bright and early.  It was a long day, consisting of about 11 miles of hiking total, but these participants were just as willing to hike as the last.  We had some beautiful views from the top of both mountains and befriended a man with two little dogs named Henry and George.  As we found out throughout the course of the hike, the man basically treated his dogs as if they were children, frequently making remarks such as “George do you need a drink of water?” or “Henry don’t worry, I’ll just get the lunch out of my pack and then we can eat.”

We also met a man at the summit of Passaconaway who remembered me and one of the other participants from the Osceola hike the previous week! I thought it was strange to see the same person weeks in a row considering the plethora of mountains in New Hampshire, but he seemed just as surprised as we did and we had a nice conversation about our hikes.  After enjoying the sunshine at the summit of Whiteface and hiking to Passaconaway, we ate some much-needed wraps at the summit and began the trek down the mountain.  By the end of the day we were exhausted but happy, proud of ourselves for leaving campus to make time in the great outdoors.  Thanks for reading everyone!

Newer PostFrom UNH to the UK
Older PostTaking the GREs