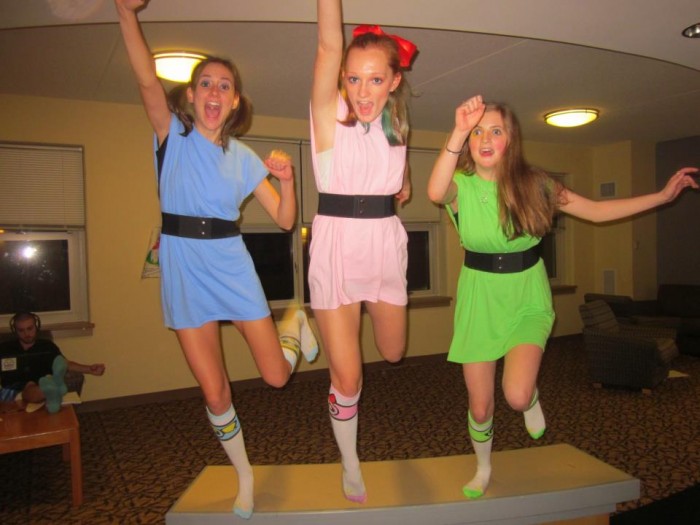 It’s already mid-October and that means Halloween is approaching fast. Halloween at college is awesome because lots of people dress up and some people get really creative. However, with Halloween comes costume stress. Being a college student, you probably don’t have much money to spend on a costume. Searching the Internet for costumes can be very discouraging because many of the fantastic costumes that can be found cost sometimes hundreds of dollars! Last year, my friends and I dressed up as the Powerpuff girls. We bought t-shirts in green, blue, and pink and black belts and it ended up only costing $5 each! I scoured Pinterest and found some really creative, clever, and cheap costumes that are affordable for any college student!

Lego: This costume is great for both genders and could even be done as a couple or group costume. You could make the lego in any color! All you need is a box (think dining halls, recycling, etc.), paint and Solo cups (which, being a college student you likely have already).

Snowman: This costume is fun and easy to put together because there is no crafting involved! The tulle skirts could even be replaced with white skirts or pants if it’s a chilly night. The only necessary purchases would be pom poms and a black hat.

Cereal killer: If you want to be punny, dress up as a cereal killer. This costume is not only hilarious, but super easy to make as well. If you don’t want to get one of your shirts “bloody”, buy a cheap shirt at a thrift shop and splatter it with red paint!

Social Media Icons: This is a great idea for a group costume. All that’s needed here are the appropriate color t-shirts. For the logos, you can buy iron on transfer sheets that allow you to print an image and iron it onto a t-shirt.

Guess Who: This costume is a great idea for couples or a group of friends. You will need some cardboard for the frames, paint, and color coordinated t-shirts. The best part of this costume is that it is an instant icebreaker as it announces your name to everyone you meet!

These costumes were just 5 of the favorites I found during my search but there are thousands more out there! I would highly recommend using Pinterest for inspiration. Don’t be discouraged by the insane creativity of others on Pinterest. If you find an intricate costume you like, focus on how you can modify it so it’s affordable and do-able! With a little creativity, you can stand out this Halloween!