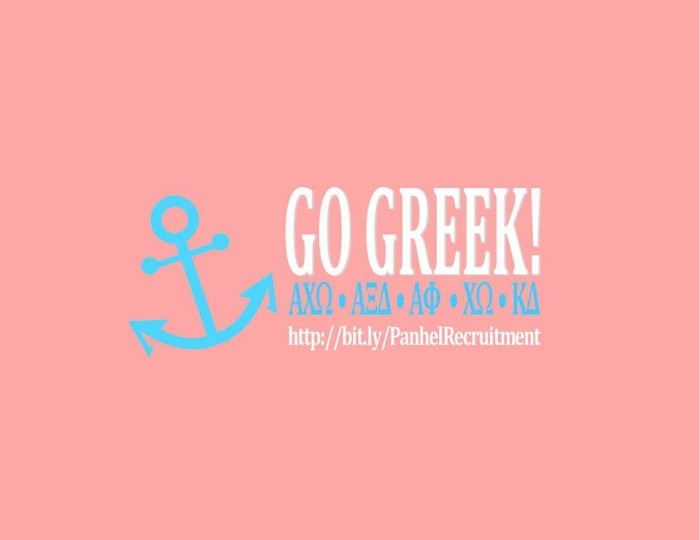 This past weekend was  UNH’s Panhellenic Recruitment and I, along with over 300 other PNMs (potential new members), as they like to call us, took part in the weekend long process. Sororities in general have a lot of stereotypes attached to them so I was interested to see if they were true or not. Despite what I had heard from students here, read in magazines, or seen on TV, I decided to rush to see firsthand what “going greek” was all about.

Friday was the first and by far the most tiring day of recruitment. The first day of recruitment is Open House which means that we would visit each of the five sororities, tour the house and socialize with the sisters. A lot of girls were really nervous for this day even though we were told to be ourselves despite the fact that we were going to be judged based on how well we “fit in” with all of the girls. There was a cloud of pressure above everyone’s head telling them to look their best, dress their best, and to be on their best behavior. At the end of the 8 hour day, we ranked the houses selecting 4 favorites and dropping our least favorite.

Saturday’s focus was the philanthropy each house participates in. Each house we revisited showed us a video of their various philanthropies and then we got to talk with more sisters from the house. There were quite a few girls who dropped during the day because they didn’t get invited back to the houses they liked. It’s important to keep an open mind during the recruitment process because things will not always go as planned.

Sunday was Pref (short for preference) night and everyone paraded down Madbury Road and Strafford Avenue dressed to the tens! It was nice seeing everyone all dressed up, but it was a little unsettling because only 100 or so girls remained. Many girls had received phone calls that morning telling them that they were not “preffed” by any of the houses which meant that their hopes of going Greek were dashed. Meanwhile, the rush process had become an intense competition as the remaining girls did their best to charm and sweet talk their way into the sorority houses they got “preffed” by in the hopes of receiving a bid.

It was after this night that I dropped out of recruitment. Even though I kept an open mind throughout the process, I decided that sorority life wasn’t for me. Maybe it was because I didn’t find the right house or maybe because I didn’t connect with the right people. Walking away from the MUB that afternoon, I felt relieved of the pressures that come along with rushing. Even though I went through this process to see what it was truly like, there were times I found myself feeling dejected when I found out certain houses didn’t pref me. Rejection is unavoidable when rushing.

I think it’s important to note that the rush process  is different for everyone. If you’re thinking of rushing and receive negative feedback from friends, don’t let them talk you down from it! Rushing, or even pledging, will not make you “one of those girls” or your stereotypical sorority girl. The stereotypical sorority doesn’t exist at UNH. Each sorority is diverse and the girls are passionate about so many different things. So if you are thinking about rushing, rush! Don’t worry about rushing alone! I met so many amazing fellow PNMs during the weekend.

It’s also important to understand that while being in a sorority might be fun, it’s also a huge time and money commitment. Sororities have dues for new members which are around $500 and in addition, have fees due every semester which range from $500-$800 dollars. There are also meetings every week and mandatory events that must be attended by all members. Some sororities also require that you live in the house as well, which is around $4000 a semester.

Overall, I had a really good experience with recruitment. I made some great new friends and had fun prancing around Greek row. Rushing is part of the college experience because you can’t rush a sorority when you’re 30. I encourage everyone to give it a try even if it only slightly interests you because you might just surprise yourself!