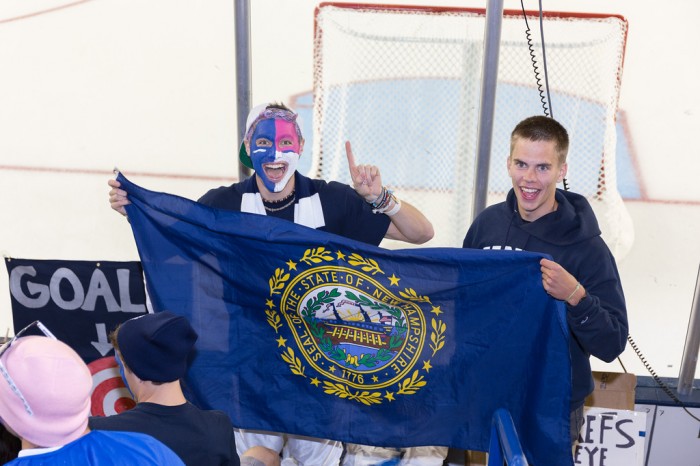 The Fear of Missing Out on UNH Hockey

I remember way back freshman year when hockey season started up- I had grown up without ever having gone to a hockey game, and it didn’t interest me in the least. I’ve never been a big fan of watching sports, as I’d rather be playing. So when my new-found friends asked me to go to the first game of the season, I was hesitant. The fear of missing out (a syndrome commonly known as “FOMO”) convinced me to get a ticket and see what it was all about. That game was enough to show me why hockey is such a big deal at UNH.

I had no idea what the rules were, but students around me were kind enough to tell me there are three periods when I loudly asked what quarter it was. The cheers were definitely something new to me too. All my life I had been told to be respectful to the other team, and here I was yelling “You suck!” along with thousands of other fans. I love that school spirit, and I’ve loved it since that first game. It’s amazing how hard the staff and ‘Cat Pack work to involve students.

A New Meaning to Being part of Wildcat Country

In most games, between periods, students are invited to play games on the ice for various prizes. This has been on my bucket list since freshman year, and during the last home game I was lucky enough to be chosen. I was sling-shotted across the ice into bowling pins, which was both terrifying and exciting. I knocked over 4 pins, which meant I won 4 Domino’s pizzas! The perfect prize for a student who’s no longer on a meal plan (big mistake). Even as a senior, going to hockey games doesn’t get old. Looking out into the crowd and seeing all of the enthusiastic alumni confirms these games show our school spirit and get Wildcats together, no matter what age.