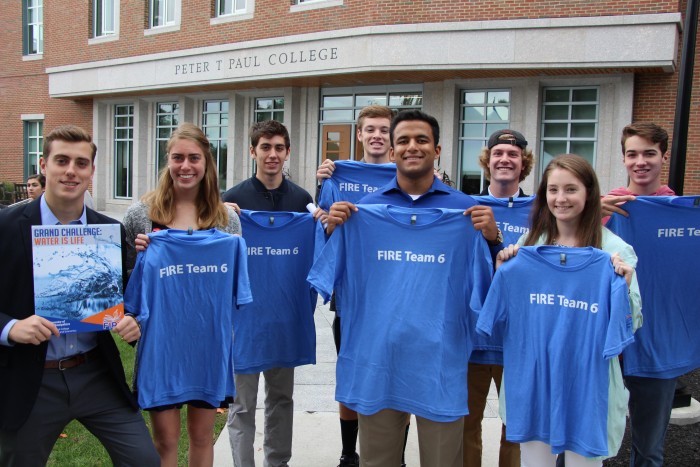 Two months into my first-semester of freshman year, I never want to leave. I love everything UNH has to offer and am excited by the endless opportunities.

Coming to the University of New Hampshire was not a goal of mine.  In my hometown of Nashua, NH, UNH was dubbed “The University of Nashua High”, and up until my senior year of high school it was something I never wanted to do. Then, somehow, I ended up living in Stoke Hall and attending the Paul College of Business and Economics. Now, two months into my first semester

of freshman year, I never want to leave. I love everything UNH has to offer and am excited by the endless opportunities I have here. The thing I’ve benefited most from is the FIRE program.

The FIRE program is something that I personally connected with because I was the founding member of something very similar in Nashua. My program was called Titan Connections, a freshmen mentorship program created to ease the transition from middle school to high school. The inspiration for the program came from Nashua North students that mentored me throughout my years as an underclassman and they were my role models. I wanted to pay it forward. Every freshman deserved to have someone that they could ask for help. After a summer of meetings with teachers, principals, the superintendent, and the board of education, Titan Connections was born. The 400 freshmen were split into 40 groups of ten and assigned a senior mentor with whom they would

meet with on a bi-weekly basis. Throughout the school year, the program had many ups and downs. Often times it was difficult to motivate kids to participate and mentors were frustrated. These issues were discussed in “mentors only” meetings and the plan for a charity fundraiser was created. The kids were asked to vote on a charity as a group and then raise money towards it. Whatever group raised the most money was given a pizza party. In the end, the program raised over $500 dollars for “Cure for Hope”. At the end of the year, a survey was given to the freshman asking about their Titan Connections experience and the majority of kids said they had benefited in some way from the program. The program continues to run and grow this year.

After being so involved in my high school, having no extracurricular commitments in college was a foreign feeling and I felt lost. However, the FIRE program has helped me fit in at UNH. By going to events for points, I’ve become much more comfortable with the campus and have met so many new people and have made friends because of it. My mentor, Jon Tamposi, has assisted me with assignments, provided exam tips, suggested groups to join and worked with me on my resume and cover letter, which helped me receive a job at People’s United Bank. He also provided me with the opportunity to become an Igniter which has allowed me to become more involved within the FIRE program. I get to share my ideas with my peers and work to improve the program. I now have something I can be passionate about at UNH and it has improved my college experience tremendously. Paul FIRE has made everyday a good day to be a Wildcat for me. One day, I hope to be a Peer Advisor and be able to do for a freshman all that Jon has done for me. I want to get everyone FIREd up about UNH.