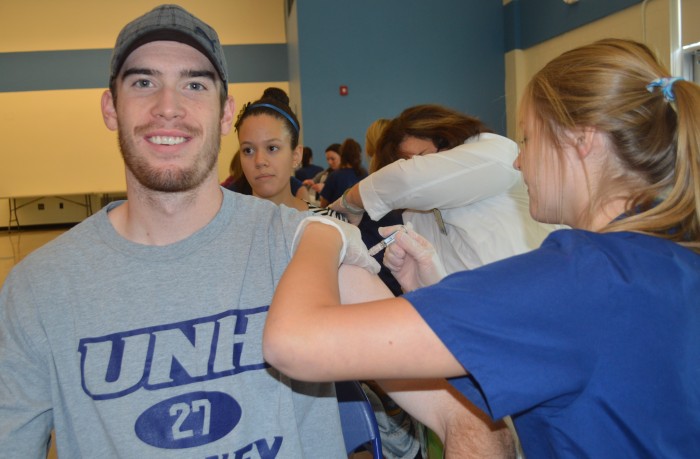 New seasons are supposed to be exciting. At the beginning of autumn, we look forward to meeting new people and learning new things with the start of classes. When spring arrives, we walk outside and think, “Oh yeah, this whole sun thing is pretty cool — glad that’s back again.” New Patriots season? Unbridled optimism about new players and another chance at a Super Bowl. New season of “Game of Thrones?” Can’t wait to see who gets the grossest death scene.

Flu season must’ve missed the memo. It is not an exciting time; it is a time of coughing, sore throats, aches, chills, fatigue and sometimes vomiting and diarrhea. It’s not fun to talk about at parties. It’s not fun enough to warrant spoiler warnings. In fact, the flu can actually be quite dangerous. Some years are worse than others, but the Center for Disease Control estimates that between 1976 and 2007, influenza contributed to between 3,000 and 49,000 deaths each year. And that’s after the flu vaccine was invented. How dangerous would the flu be without vaccines? The 1918 flu, sometimes called the Spanish Flu, is estimated to have killed 20-50 million people. To put that into perspective, more people died because of the flu that year than during the entire first World War.

But protecting yourself isn’t the only reason to get vaccinated. If you’re a young, generally healthy college student, the flu will be unpleasant and probably cause you to miss class and work for a couple days. However, you probably come into contact with people for whom the flu can be much more complicated. Children, old folks and people with chronic medical conditions (such as asthma or diabetes) are all more likely to end up hospitalized — or, at the risk of being morbid, worse — with flu-related complications such as infection or pneumonia. The flu vaccine isn’t just to protect you; it’s also to protect those you care about. This is called “herd immunity,” by the way, and it’s what protects you from all sorts of nasty diseases you don’t want.

Luckily, you can get vaccinated right here at UNH, either by making an appointment at Health Services or by attending the vaccination clinic (open to UNH students only). Below are the clinic details, plus some answers to a few other questions you might have.

Wednesday, October 5, 10 a.m. – 5 p.m. (Again, this is just for students. Other members of the UNH community can make an appointment with Health Services.)

Where do I go?

The clinic is in the Hamel Recreation Center, which is on Main Street next to the train station.

Will it cost me anything?

The cost of the flu clinic is included in your mandatory student fees.

What form does the vaccine come in? (In other words, do I have to get a shot? I hate shots.)

This year, the answer is yes, you do need a shot, according to the CDC. You can read about how flu vaccines work here. If you’d rather watch a video that’s funny but also informative, try this oldie but goodie.

Some people say the flu vaccine can make you sick or turn you into a zombie or something. Is this thing safe?

(Sigh) Unfortunately, there are some weird myths surrounding vaccines, like that they can make you sick or that they don’t work. For the facts on flu vaccines, read this from NPR, this CDC fact sheet or, if you’re into opinion columns, try this one from The New York Times.

Is there anybody who shouldn’t get the flu shot?

If you’re younger than 6 months, don’t go to the clinic. (Or maybe do because you’re a baby who can read, and that’s pretty amazing, but don’t get the shot.) You might also want to talk to your doctor if you’ve had Guillain-Barré Syndrome or if you have an allergy to any of the ingredients in the vaccine. (Read about what’s in it here.)

So, once again, flu season’s on its way; it premieres in the beginning of October. But unlike pretty much every other kind of season, flu season isn’t one you’re going to want to watch. And the best way you can avoid it (and help those you care about to avoid it) is by getting your flu shot.