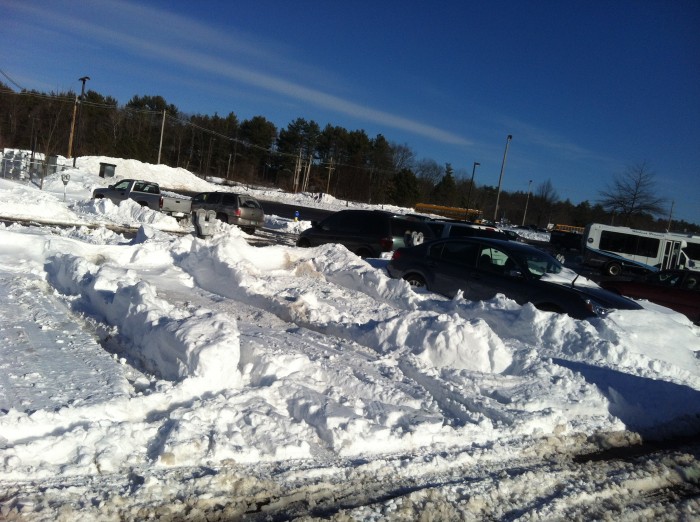 This past weekend, the town of Durham – and the New England coast in general – endured yet another storm. For a better reference, check out this aerial picture of Boston two hours after Nemo came through. “Endured” probably isn’t the proper word, though, since it’s very clear the majority of students are NOT enduring this weather. They’re miserable, mopey, sloshing from class to class, ruining pair after pair of socks, and drenching their jeans and yoga pants. It’s pretty awful, and at this point, I’d rather have 20 degree temperature than two weeks of this lukewarm stuff. After all, we have 22 inches of snow covering our streets, which means Durham is going to be flooded (figuratively) if this warm weather sticks around.

Though far less damaging than his cousin, Superstorm Sandy, Winter Storm Nemo rocked us like a hurricane. Seriously, puns aside, Durham got DUMPED on. The snowfall was 2nd most in the state’s history, and it blanketed every street, sidewalk, and house. Students fell asleep in an exhausted stupor on Friday night, and when they finally stirred from their slumber the following day, UNH looked more like Narnia than the dry, green campus we’ve grown so accustomed to this Winter.

And the students rejoiced! Well, they rejoiced until the snow started to melt, and until classes opened up again. And I’m sure there were complaints about the 50 mph winds that sent buffeting piles of snow into the faces of anyone who walked around town. However, nothing would stop us grizzly, thick-skinned New Englanders from enjoying a blizzard! There were snowball fights, snowmen, and makeshift sledding hills being built all over campus. I even saw a game of football being played. The “Dimond Library Ski Squad” (that’s not an official name, but I’m making t-shirts as we speak) once again built their jumps on the backside of the library hill and spent much of the afternoon impressing all those who walked by.

As for myself, I spent much of my weekend watching The West Wing. I’ve already plowed through (look, another pun) fifty episodes and I just barely discovered its existence on Netflix a couple weeks ago. And since I lacked the proper skills and equipment to carry out my dreams of becoming an X-Games medalist, I had to settle for some good old fashion sledding instead.

The merriment and celebrations were all good and fun, but come Sunday, students eventually started to realize that there were bigger implications than had initially been expected. Closed dining halls, cars trapped in by snowbanks, and a sidewalk paving system that didn’t really get moving until Sunday. Students were trudging through knee-deep snow in order to eat lunch, study at the library, or visit a friends dorm. And others were forced to shovel (or attempt to shovel) a wall of snow out of the way so they could move their car. And to all those who were graced with 4-wheel-drive, I hate you and your braggadocio. Although I will admit, the awful gas mileage seemed like a reasonable price to pay in exchange for avoiding hours upon hours of shoveling.

All that shoveling remind me of some of this Calvin and Hobbes strip. Unfortunately, when you’re digging your own car out, “doing the job badly” doesn’t help whatsoever.