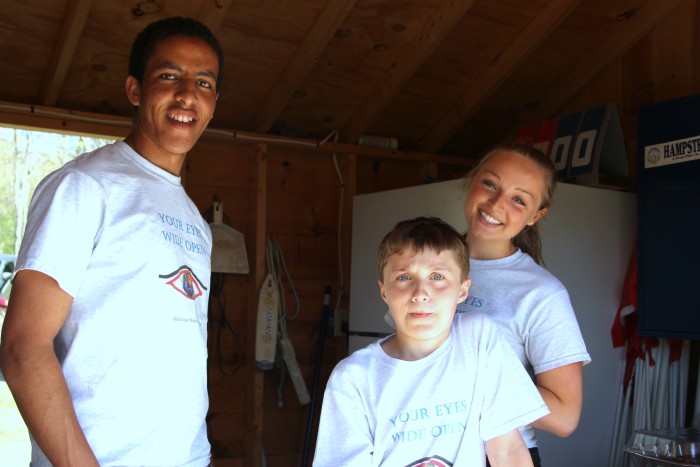 Three years, eleven months, and two weeks ago I embarked on a journey that would change my life in more ways than I could know. I stepped onto a plane, snuggled into my stiff seat, and

started on my way to Ethiopia. When my sister, Mom, Dad, and I finally arrived (twenty-six wonderful hours later…), it was the middle of the night, we couldn’t understand anyone, and our driver was nowhere in sight. Talk about culture shock. But a few days later, with delicious food in my stomach and spices filling my nose, I realized that I had fallen in love with this country. There is nothing more beautiful than lush green rolling fields, smiling people, and community bonds, and that is what I found in Ethiopia.

Unfortunately, I also found children with protruding, malnourished stomachs. I met grown men and women who had never been to school. I saw wives with more children than they could care for. And I heard children following behind me, asking for nothing but a pen for school.

It never really hit me until I got back home that those children following me only asked for a pen. Not money, not food… they just wanted a pen. Because school in Ethiopia is not a promise for children, as it is here in the United States. Because without a pen, you can’t go to class or do work or get an education. Something so small, that to me was trivial, could change those children’s lives. That’s when I decided to do something.
Two years, three months, and one week ago I brought together nine friends and siblings to start a nonprofit that would support education in developing countries. The group was formed because we all had one thing in common: we wanted to find a way to impact the lives of young people just like us, but who did not have access to an adequate education. We wanted to make a difference.

Now, I could get into the story of our charity Your Eyes Wide Open, how we started it, what we’ve accomplished and why and how we do what we do. Instead, I’ll let you learn that on your own so I can go ahead and share the impact that Paul College, and specifically the First-Year Innovation and Research Experience (FIRE) program, has had on my organization. So check out youreyeswideopen.org for more information on the work that we do.

One of the biggest challenges I have faced in running my nonprofit is that I have no experience in founding and running a company, and neither do any of my siblings and friends.

Paul College has changed that for me. Since starting this semester, I have learned how to market a company, how to create the brand for a company, how to manage a business, and much more. The FIRE program has made me aware of ways in which I can put those skills to use, and reach out to professionals who can help me take Your Eyes Wide Open to the next level.

I have learned about pitch competitions that I can enter. I have learned the importance of networking with UNH alum. I have learned how to put together a stand-out presentation that is both professional and personable. The University of New Hampshire Paul College of Business and Economics, and its FIRE program, has given me more than just one semester’s worth of knowledge. It has provided me with the skills and resources necessary to benefit my nonprofit and the lives of students from around the world. And for that, I am very grateful.

One semester in, and I’ve gained more than I ever imagined I would. With the base that the FIRE program is providing me with, the sky really is the limit, and I’m excited to see where it helps me get to down the road.

Devin McMahon is the oldest of five children, and a driven first year Business Administration student at the University of New Hampshire. She graduated from Pinkerton Academy as Student Council President and Future Business Leaders of America Community Service Coordinator. McMahon was chosen to represent the state of New Hampshire as a delegate for the United States Senate Youth Program March 2015, and placed fourth at the national FBLA conference June 2015.

McMahon is currently the founder of Your Eyes Wide Open, and attributes her success to her work with Student Council and FBLA, her family, and the opportunities that she has had to travel and understand different cultures.