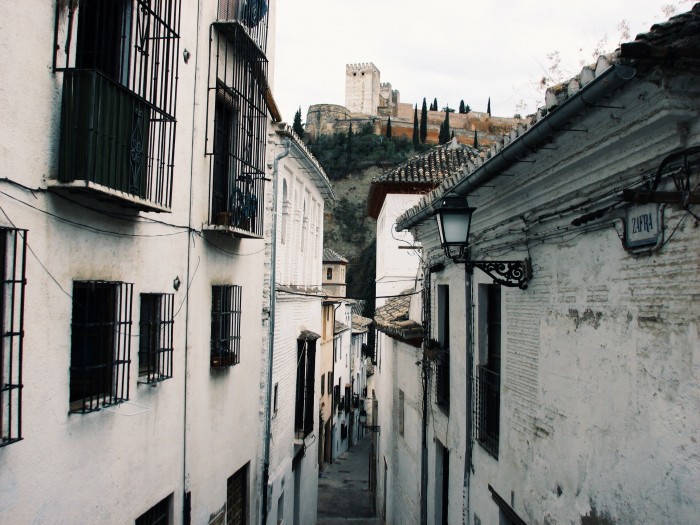 My name is Charlotte, and I’m a sophomore currently studying abroad in Granada, Spain. Along with about 23 other UNH students, I am taking part in the UNH-managed Granada Program, offered through COLA’s Center for Study Abroad. I am sharing some of my experiences and observations of Spanish culture throughout the semester here on UNH Tales.

Today, I’m continuing my “Exploring Granada” series in which I highlight historic sites and neighborhoods throughout the city of Granada…

Today I’ll guide you through one of my favorite neighborhoods in Granada, the Albaicín (alternatively spelled Albayzín). The Albaicín is the Arab quarter of Granada, founded by the Moors that ruled Granada during Medieval times.

Between the whitewashed buildings, narrow cobblestone streets, and bright, geometric doorways, it’s easy to see the Arab influence in this eccentric neighborhood.

It’s hard to turn a corner in the Albaicín without happening upon an intricate doorway or pretty view. Because the Albaicín is situated on a hill opposite the incredible Alhambra palace, the scenic views are frequent.

Along with the Alhambra, the Albaicín was declared a UNESCO World Heritage Site in 1984, bringing global attention (and subsequent tourists) to this area of the city.

The Albaicín is always buzzing with people, whether they are shopping for unique goods and textiles at the Arab markets, drinking tea at the teterías, or taking in the incredible views from the many miradors (look-out spots). It is easy to get away from the crowds, however, in one of the many tiny, winding streets of the Albaicín.

One of the most incredible things about the Albaicín is the feeling of authenticity. Although there are tourists, there are also locals bustling about their neighborhood, mopeds speeding by, overgrown gardens spilling over the walls, and paint peeling from the aging houses.

One of the defining characteristics of the Albaicín is the abundance of carmenes, homes that are separated from the street by a high wall and contain outdoor spaces with gardens, small fountains or ponds, and fruit trees. You can easily spot these beautiful carmenes by their tall walls covered in ivy or grapevines, and oftentimes there is a sign stating the name of the carmen. Many of them have been converted into restaurants or event spaces, so you are able to wander around and get a sense of the tranquility that these unique homes provide their residents.

One of the larger streets of the Albaicín runs along the River Darro and has great views of the Alhambra, which sits atop the hill right across the river. After a few blocks, the Carrera del Darro turns into the Paseo del Padre Manjón, which was named in honor of a monk from Granada who founded a school for the marginalized gypsy children of the Sacromonte neighborhood.

The Albaicín has served as an eccentric backdrop to centuries of fascinating history, making it an incredible cultural asset to Granada and an amazing place to explore.

Missed my post about the Alhambra? Catch up here and read my other posts from Spain here. The next installment in “Exploring Granada” will take you through the fascinating Sacromonte neighborhood, so stay tuned!