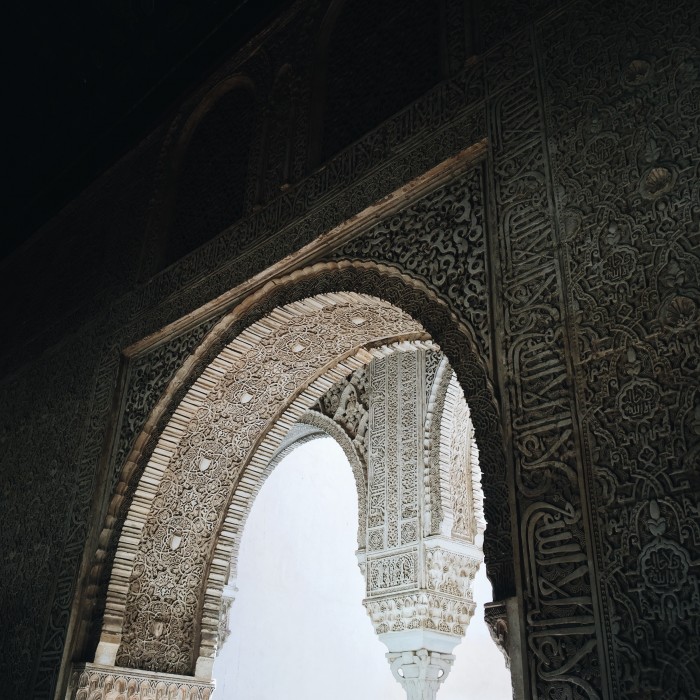 My name is Charlotte, and I’m a sophomore currently studying abroad in Granada, Spain. Along with about 23 other UNH students, I am taking part in the UNH-managed Granada Program, offered through COLA’s Center for Study Abroad. I am sharing some of my experiences and observations of Spanish culture throughout the semester here on UNH Tales.

Today, I’m starting a series in which I highlight historic sites and neighborhoods throughout the city of Granada…

Beautiful and steeped in history, Granada is a mid-sized city located in the Sierra Nevada mountain range in southern Spain’s picturesque Andalucía region. If not for the iconic Alhambra, what many call the city’s “crown jewel,” Granada might never have become as well-known as it is today.

The Alhambra is a compound of several different palaces and gardens originally built during the Arab Nazrid dynasty in the 13th and 14th centuries. The province of Granada was the last remaining stronghold of the Muslims before Queen Isabel I of Castile and King Ferdinand II of Aragon (known as the Reyes Católicos, or “Catholic Monarchs”) completed the Reconquista of Spain in 1492. Due to the long-standing Arab reign, there is a strong Moorish (the name given to the Muslim inhabitants of the Iberian peninsula) influence in the architecture and culture of Granada. The Moorish fortresses and palaces of the Alhambra are the most significant example of this.

Court of the Myrtles, or Patio de los Arrayanes, in one of the Nasrid palaces of the Alhambra.

There is also a Catholic palace within the Alhambra, built by Charles V of Spain a century after Granada came under Catholic rule.

The courtyard of the Palacio de Charles V, a later addition to the Alhambra.

The Alhambra is one of the most visited places in Spain and is a UNESCO World Heritage Site. Walking through the ancient buildings and tranquil gardens feels like a step back in time.

The Palace of the Lions, or Palacio de Los Leones, in one of the Nasrid palaces.

In the architecture, the attention to detail is truly incredible. The walls are covered in tiny, intricate designs.

It is hard to fathom how much time and work went into the construction of these buildings!

The Alhambra fell into a state of disuse and subsequent disrepair for several centuries until writers and scholars from all over the world began to visit the site during the 19th century. These scholars, such as the American diplomat and author Washington Irving, encouraged the restoration of the palaces and brought the Alhambra back into the public consciousness.

In addition to the main palaces, the Alhambra includes a summer palace and the surrounding Generalife gardens.

The Alhambra palaces sit on a hill above the city and therefore have amazing views of Granada.

While touring the Alhambra, I was again reminded how amazing the opportunity to study abroad is. It’s so important to get to know the rich cultural history of a different place.

For more on my adventures in Granada, check out this video of a recent Takeover Tuesday on the UNHStudents Snapchat! You can read all of my blog posts from Spain here.