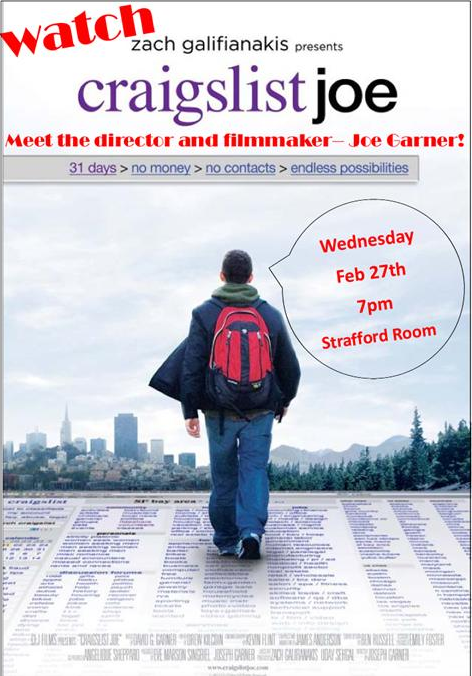 I hadn’t heard of the documentary when Dave Zamansky, Assistant Director of the MUB, asked me if I would have dinner with the director of Craigslist Joe.  I did a quick Google search on the film.  Craigslist Joe is a documentary released in 2012 that follows 29-year-old Joe Garner, director and adventurer, on a journey across the United States for one month.  The catch?  Joe has, no money, no contacts, and can only survive on the support and goodwill that he finds on Craigslist.  All that Joe brought with him was a laptop, cell phone, toothbrush, and the clothes on his back.  Within minutes, I was scrolling through Netflix to find the movie while responding to Dave’s email with a ‘yes, absolutely.’

The MUB Board of Governors organizes several speakers to come to UNH each semester for their MUB Current Issues Lecture Series.  I went to their first lecture of the semester in February with Reed Timmer, Discovery Channel’s Storm Chaser.  Joe Garner was their second guest this spring, and I am thrilled I had the opportunity to have dinner with him before his presentation.

Joe met Brittney and me at the MUB info desk so we could walk to Holloway Commons together.  He was impressed with his dinner.  But I was more focused on the questions that I had for him than I was on eating!  I watched the documentary over the weekend and had loads to ask.  I am fascinated by what Joe did, but what I really wanted to know was: what’s the verdict, are people good or selfish?  His adventure began as a test to see if, in the midst America’s economic crisis, people would still be willing to help him.  Despite many unanswered ads, being stood up countless times in Internet cafes, and spending a night or two without a bed, Joe stands behind the support that he received on his 31 days living off Craigslist: people are good.

It’s the unique experiences, like eating dinner with the director of a successful and thoughtful documentary, that adds yet another reason to my list of why I love going to UNH.

Be sure and check out the next Current Issues Lecture Series on Wednesday, March 27th in the Strafford Room with feminist and author, Jessica Valenti.