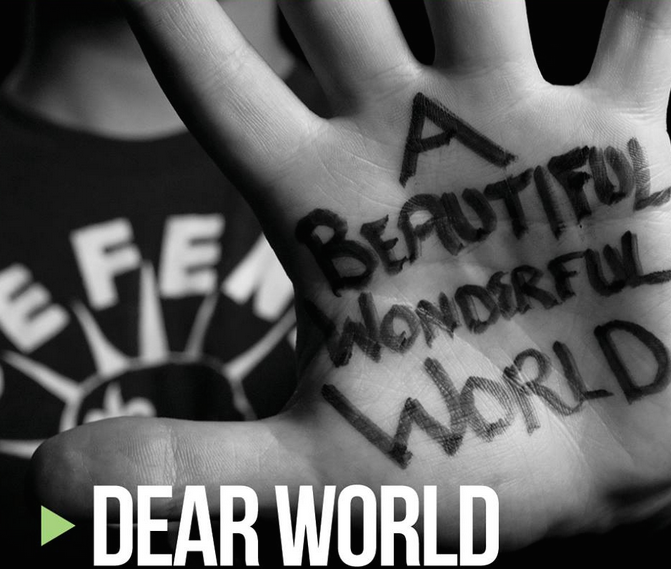 On Nov 5, UNH was fortunate enough to welcome world-famous photographer Robert X. Fogarty as a guest speaker. Fogarty is best known for his “Dear World” campaign, which connects people from across the globe by writing simple yet powerful words on their skin. These messages represent something really important whether it is about personal triumph, family, love, race, religion, sexuality, or simply messages of pure inspiration. Fogarty spends time visiting colleges all across the country and takes portraits of students.

UNH students wrote their messages to the world somewhere on their bodies and Fogarty snapped a photo. Fogarty graciously spent four hours taking portraits of UNH students. Later that night, Fogarty spoke of his travels and how he has photographed Boston Marathon bombing survivors, children in the midst of war in Syria, famous Saint’s football player Steve Gleason and many more people who have a message to send to the world. I can attest to the fact that there was not a dry eye in the Granite State Room that night as students intently listened to Fogarty’s deeply emotional stories.

A story that particularly struck me was Celeste Gagnon Corcoran who lost both of her legs on the infamous day of the Boston Marathon. Celeste chose to write, “still standing” on her skin, which I found to be an unbelievably inspirational message. It truly puts one’s life into perspective after listening to the stories of people like Celeste who have endured so many obstacles yet they are able to carry on with their lives with such courage. Fogarty also discussed his time spent in Syria, a country in the midst of a

Civil War. Despite the everyday terrors in Syria, Fogarty encountered a group of children who spoke of typical kid things such as playing in the park or hanging out with friends. It was truly eye opening to listen to these stories of the innocent children who are in the midst of a raging war. It really made me reflect on my own life and realize how fortunate I am to be where I am today.

After Fogarty shared his stories, he called up four UNH students to share what they wrote on their arms and why. All four students spoke so eloquently and confidently about their messages. It was awesome to hear fellow students speak about their past and listen to their inspirational messages. Overall, it was a wonderful event filled with inspirational stories that I’ll never forget.

So, what is your message to the world?