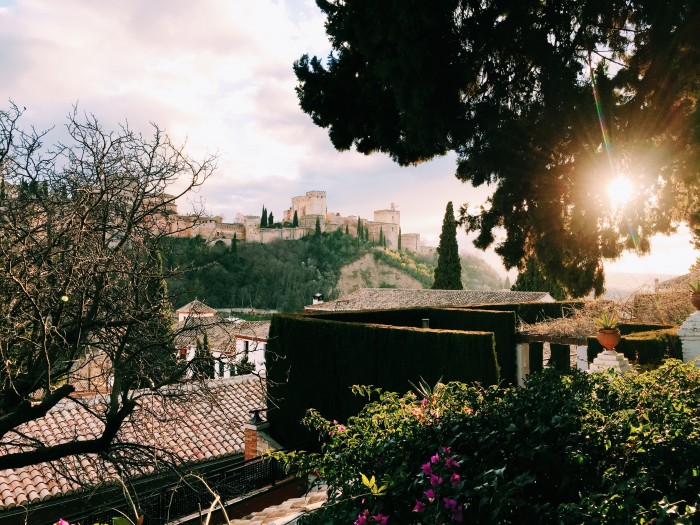 My name is Charlotte, and I’m a sophomore currently studying abroad in Granada, Spain. Along with about 23 other UNH students, I am taking part in the UNH-managed Granada Program, offered through COLA’s Center for Study Abroad. I will be sharing some of my experiences and observations of Spanish culture throughout the semester here on UNH Tales… Stay tuned!

One of the bigger adjustments I had to make since arriving in Spain two weeks ago is adapting to the Spanish daily schedule. The mealtimes, routines, and customs of the Spanish culture are very different from those of America. It has been particularly interesting for me to think about my daily life back in Durham compared to my daily life here. Although I haven’t quite gotten into a routine yet here in Granada, I have a pretty good idea of the standard rhythm of life here and how it varies from the typical student routine back at UNH.

Here are some differences between daily life in Durham and Granada.

In Durham, I would say the students usually wake up between 7:30 a.m. — if you’re one of the unlucky that has 8 a.m. classes — and 10 a.m. Those who have time head to the dining halls for a big breakfast. Whether you fill up your plate with eggs and pancakes at HoCo or wait patiently for a breakfast sandwich at Philly, you won’t start the day on an empty stomach.

Here in Granada, the city streets are full from about 8 a.m. on with kids heading to school, professionals heading to work and students heading to class. Breakfast is a small meal in Spain. You might have a piece of a toasted baguette with some juice or a yogurt. Heaping servings of eggs, pancakes and the like are nowhere to be found.

Walking around the UNH campus on any given morning, you’re bound to see students hurrying to class with a coffee in hand or see long lines forming at Dunkin Donuts, Aroma Joe’s or Zeke’s. When it comes to coffee, it’s the bigger the better, as large quantities of caffeine are considered a must for most Wildcats. And even if the temperature has dipped to the single digits, don’t be surprised to see students sipping down iced coffee!

Getting coffee is more of a social ritual here in Spain. Coffee is to be slowly sipped and enjoyed while sitting with friends. Some cafeterías (cafés) don’t even offer coffee to go! The portions of coffee here are also drastically different. A café con leche (coffee with milk, similar to a latté) comes only in one size, usually a small six- or eight-ounce mug. Additionally, iced coffee isn’t served in Spanish coffee shops.

After morning classes, UNH students typically head to the dining hall starting at about noon, with crowds thinning out around 2pm. You might have a sandwich, a slice of pizza or some salad, but usually nothing too heavy or big. You might even skip the dining hall and opt for a quicker option, like a salad from Union Court or a to-go meal from a café around campus. Lunch falls in the middle of students’  busy days, and therefore is usually eaten quickly before rushing off to class.

On the contrary, lunch is the biggest meal of the day here in Spain. Additionally, it is eaten mid-afternoon, any time from 2-4 p.m. Students leave school and adults leave work to enjoy lunch together at home. Even most stores close so that the employees can go home for the meal! Lunch is seen as a time to relax and catch up with the family. The home-cooked meals are served in large portions. You might eat seafood paella (a famous Spanish rice dish), enjoy a hearty fish or meat dish or have a big helping of tortilla española (the Spanish version of an omelette), along with several side dishes.

In Durham, the afternoon is usually a busy time for students. Unless you’ve gotten all of your classes out of the way in the morning or have nighttime lectures, you probably have classes in the afternoon. Even if you don’t, students are still busy, trying to catch a professor during office hours or chipping away at their studies in the library.

Following the mid-afternoon lunch, Spaniards take time to rest during the siesta. Most take an hour or two to sleep or simply relax in the home. Most stores are closed during this time as well. The city collectively slows down and takes a break. Around 5pm, most people return to work for a few more hours.

Dinner is the biggest meal of the day in the United States. For college students, it is not to be missed. The dining halls fill up starting around 5 p.m. with groups of friends reuniting after a day of classes. Students usually help themselves to large portions of combinations including pasta, meat, pizza, and potatoes. And there’s always a variety of cookies and cake for dessert!

At about the time when UNH students are eating dinner, 5-8 p.m., people in Spain are meeting up with friends for tapas (small plates of food) at restaurants around the city. That’s because dinner isn’t served until late at night. Families usually eat a light meal (think soup and salad) anywhere from 9:30pm to 11pm! It was hard to get used to eating so late at first, but I have come to like it. I see dinner as the end to the evening now rather than the beginning.

It’s so interesting to me to see the differences in daily routines between my life at UNH and my life here in Granada. Being immersed in a different culture is such an important and valuable experience, and I’m so thankful to UNH for providing the opportunity! Check back soon for more on life here in Spain.