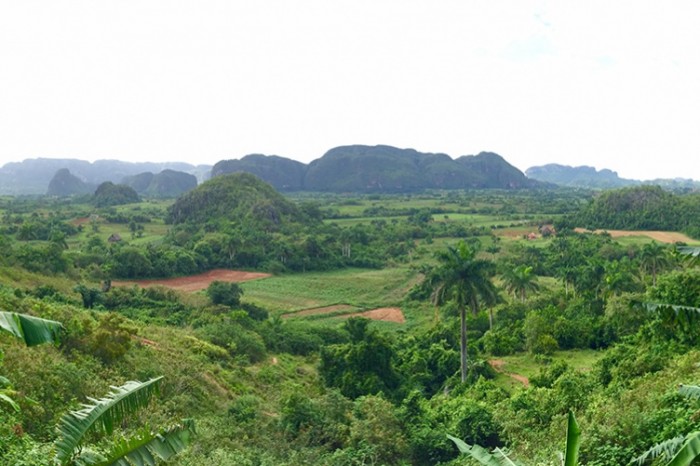 In June, UNH student Megan (Maggie) Savoie ’17 visited Cuba as part of an intensive two-week summer course offered through the University of Florida. While there, she developed a hands-on understanding of the marine and coastal ecosystems, explored the impacts of development on ecological communities and learned about Cuban history and culture. Savoie says she was deeply affected by her time on the colorful but timeworn Caribbean island, whose diplomatic relations with the U.S. were restored in 2014, making trips like hers possible. Here, Savoie shares a snapshot of her experience.

Savoie and other students hike past a cieba, or kapok tree, lone evidence of a long gone tropical forest.

From June 5-16, I had the amazing opportunity to travel to Cuba to study the island’s history, marine life and coastal ecology. My words can’t do the country’s beauty and struggles justice. My 1,018 photos only begin to capture the charm, hardships and artistry that I saw and felt while there.

Each day, as I traveled with the other students in the class to new places and learned of the history and ecology that surrounded us, I found myself comparing Cuba to other places I had visited around the world. I did this until I realized that this was one country — with its stately but crumbling architecture, 1950s-era automobiles and unspoiled natural beauty — that defied any comparison.

These photographs are from our seven-hour hike through Viñales Valley, my favorite day of the trip.

Our first stop was at a little shack that was selling drinks and cigars. There we saw a raccoon/rat-like animal known as a houtia. Houtia are an endangered species that can be domesticated and kept as pets. They are friendly enough to pat only on their heads. Despite being endangered, they are eaten as food in some areas.

Mountains in the Viñales Valley are known as mogotes. After leaving the shack and the houtia, we climbed stairs that had been carved into one of the mogotes to a cave, then we climbed farther up rocks to see wild mountain goats. I was even able to pet one. I was secretly nervous the goat was going to ram me with its head, but here I am writing this, so it all worked out.

After climbing down and hiking through another cave, we reached an opening to what seemed like a prehistoric world, like something out of a real-life “Jurassic World.”

The caves we visited have historical importance. When the Cuban rebels were attacking the Batista government in the 1950s, they hid weapons in the caves. Later, during the Cuban Missile Crisis, Castro’s troops used the caves to hide water and supplies during bomb threats from the U.S.

We hiked down the other side of the mogote into the valley where we saw lots of cattle and private farms. An old man smoking a cigar by his farm explained that the plow sitting outside his hut had been passed down for 170 years through generations.

We stopped at a very famous tree called a cieba, or kapok. The enormous tree is all that remains of a tropical forest, and the height of its uppermost branches indicate a long-disappeared canopy.

Our next stop was a small tobacco farm. This farm was far less modern than the larger tobacco farm that supplies leaves for the renowned Robaina cigars, which we had visited a day earlier. The larger farm had better materials to help regulate temperature and humidity. This farm did not have access to the same type of materials and resources.

The group enters the second cave.

From there we walked to an underground lake in another larger cave. The second cave was much longer than the first. There were lots of small pools. Toward the end we reached the “lake” and went swimming. It was fairly shallow, only getting up to shoulder height in the deepest places. We were able to walk pretty far into the lake, until we got too creeped out to go any further.

Swimming in the underground lake

After going back to our houses to shower and prepare for dinner, we stopped at a restaurant called Balcon del Valle (translation: Balcony of the Valley) for refreshments and a beautiful view of the valley before going to a celebratory goodbye pig roast in advance of our departure for Isle of Youth, or Isla de la Juventud.

Although short, my visit to Cuba was a trip of a lifetime. During my past three years of college, I have met some of my dearest friends and have become close with a few professors along the way. But this trip was unlike anything I’ve experienced. In a very short time, friends became family and professors became not only mentors but also friends. I saw dilapidated buildings and ramshackle homes set against a backdrop of almost unfathomable natural beauty. In everyone and everything, I saw an island on the brink of change. I feel fortunate to have seen Cuba as it is now and to have felt as if I’d almost time travelled back into the 1950s. I am almost jealous of those who have not yet gone, but are soon to go, because they have the opportunity to see with fresh eyes such an incredible place.