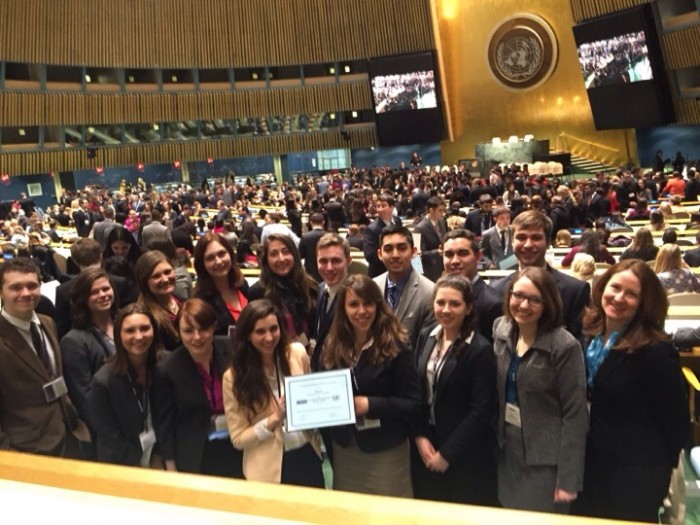 I joined Model United Nations without knowing what to expect. As an over-involved senior in the Accelerated Master’s program I did not have much free time, but for years I had been hearing about the opportunity to attend a conference in New York from my peers in the Political Science department. So, I finally decided to make the leap and join (yet another) student organization. And I haven’t regretted it for a second.

After joining the UNH Model UN team, I attended meetings and started researching the policy positions of Belarus, the country we’d be representing this year. In addition to policy positions, I learned about parliamentary procedure and resolution writing – two crucial aspects of United Nations committee work that we would be imitating at the National Model United Nations conference, Model UN’s annual capstone event for the year.

To provide some background information, National Model UN is sponsored by the National Collegiate Conference Association (NCAA), a nonprofit organization seeking to “advance…understanding of the United Nations and contemporary international issues” (nmun.org) through providing students an opportunity to become better global citizens through education emphasizing collaboration and cooperative conflict resolution. Model UN uses a structure of cooperative learning in which students confront contemporary topics from the perspective of an assigned country or organization. Through their preparation before the conference, during committee sessions, and within hallway caucuses (the informal meetings during UN committees), students “develop an appreciation of differing viewpoints, experience the challenges of negotiation, see the rewards of cooperation, broaden their world view, and discover the human side of international relations and diplomacy” (nmun.org). I would wholeheartedly agree that I gained experience in all these fields, and had experiences meeting other students that I never would have expected before joining Model UN.

During committees our activity would change depending upon if we were in formal or non-formal session. Formal session mostly consisted of speeches. Since UNEP was a large committee with hundreds of student representatives hoping to speak, I was only able to speak once during the course of the week and was able to practice my public speaking skills on hundreds of students. Informal session was my favorite, because it allowed me the chance to meet the other student delegates in an un-moderated setting to work on resolutions.

One incredible part about the NMUN conference was the utter diversity of all the student delegates. About 3,500 students attended the conference in New York. Of these 3,500 students, many were from the United States but a large proportion were not. Within the informal committee session I worked with students from Germany, China, and the United Kingdom. I met other students from myriad countries as I networked throughout the week, and now that we are back at school I am still remaining in contact with many of them.

Aside from the social aspect of learning about the lives of other students, I worked with other delegates in UNEP to produce a resolution that we could have approved by the larger committee. Our agenda item for the week was “promoting resource efficiency in urban development,” so with that goal in mind we established policy programs, merged with other groups holding similar ideas, and spoke with delegations within our committee to garner support for our resolution and ensure that it would be passed.

One aspect of which I had to continuously remind myself was that I was not representing an individual, but the Republic of Belarus. An idea that I thought might be effective may not be appropriate as Belarus, given the nature of Belarus’ policies and its relationship with other countries. For example, Belarus has very close ties with Russia and treats sovereignty (independent governance by the country) as an unalienable value. So, a program that might threaten Russia or call for an oversight agency, run by other countries, to inspect various codes may be viewed by Belarus as a violation of sovereignty and thus I could not promote it in my caucus (meeting) group.

Resolution writing in a group setting reinforced the importance of working together and establishing leadership positions, but also of cooperating to reach a similar goal. While one delegate might want to focus upon water sanitation and another upon improving building codes, both realize that in order to reach the goal of promoting resource efficiency and having a resolution passed, they will have to compromise and potentially alter their values to achieve an end. It wasn’t all easy though – trying to get a group of about ten to fifteen motivated, educated student leaders to produce one resolution was difficult, and at times emotions flared. But that’s the nature of diplomacy. The fact that we were able to produce one resolution, and have it passed, during the week was a testament to the collaboration skills we learned through trial and error.

Aside from the conference, the opportunity to spend the week of March 29th – April 2nd in New York was unforgettable. Even by the end of the week I was still awed by the tall buildings and the multitude of interesting people constantly teeming around. We were housed at the Hilton in midtown, which was about a ten-minute walk from Times Square and in close proximity to many of the sights we wanted to explore in the city. I was able to visit the Museum of Modern Art and finally fulfill my dream of seeing Van Gogh’s Starry Night (my favorite painting), attend my first Broadway musical, On the Town, and even visit the real United Nations building as part of the conference. I got to know all the street carts in the vicinity while I was scrambling for lunch between committee sessions, and just being in the city for a week and able to explore was a learning experience. I didn’t get much sleep throughout the week, but it was completely worth it – I learned about international cooperation, met a group of incredible peers from around the world, and improved my skills as a leader tremendously over the course of the week.

Back on campus, Model UN is continuing to promote the United Nations goals for global peace and stability through the Freedom Café’s UN Gift Box initiative. The GIFT (Global Initiative to Fight Human Trafficking) Box is a creative awareness-raising project launched by the non-governmental organization (NGO) Stop the Traffik and the United Nations Global Initiative to Fight Human Trafficking. The UN GIFT Box is an interactive display, camouflaged to look like a present on the outside but instead allowing visitors to walk inside. The GIFT Box mirrors the deception used to lure global citizens into slavery through human trafficking and allows visitors to walk inside, read stories of human trafficking and modern day slavery from around New England. Model UN is collaborating with other student organizations on campus and the Freedom Café to raise awareness of human trafficking, an issue that is all too prevalent in our world today, and promote change beginning in our UNH community. The GIFT Box will be in the Murkland Courtyard from April 19-23, so feel free to stop by, say hello, and learn more about how we can fight human trafficking.

In conclusion, I would highly recommend Model UN to any students looking to expand their horizons at UNH and try something new – and you don’t have to be a Political Science or International Affairs student to join! For more encouragement, also check out this article in the Huffington Post http://www.huffingtonpost.co.uk/wassim-cornet/model-united-nations_b_4731419.html for more reasons to consider Model UN.