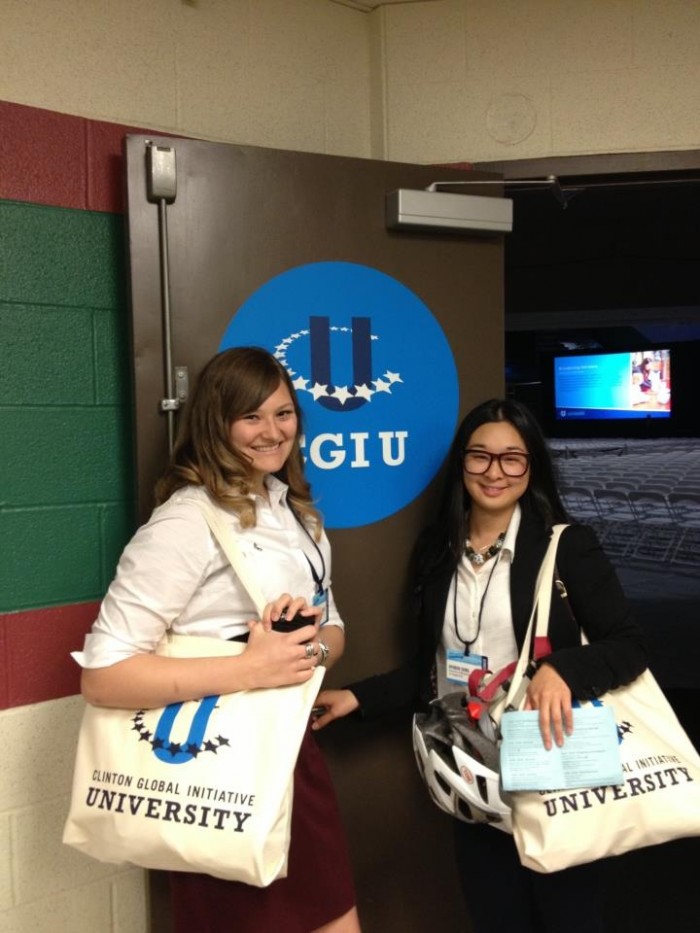 These are just a few of the people I had the chance to meet and hear speak during my whirlwind weekend at The Clinton Global Initiative University (CGI U) in St. Louis. Held at Washington University this past weekend, CGI U brought together 1000 students from all over the world. Every state of the US was represented, as well as 75 other countries worldwide. The Clinton Global Initiative University works hard to “bring together students, youth organizations, topic experts, and celebrities to discuss and develop innovate solutions to some of the world’s most pressing challenges.” Students had to apply to CGI U by creating a “commitment” to solve a world problem in one of five focus areas (education, environment and climate change, peace and human rights, poverty alleviation, and public health) and have a plan as to how to accomplish it.

The closing of CGI U 2013 featured a live taping of the Colbert Report with an interview of President Bill Clinton.

I was chosen as a representative of Amnesty International (I am currently interning and living in DC through The Washington Center) to attend CGI U this past weekend. My commitment to peace and human rights is to start an Amnesty International chapter at UNH when I return to campus in the Fall. Every attendee had an incredible commitment to how they were going to change the world, and it was inspiring to talk to all these young people who, according to President Clinton, are the world’s future leaders. The entire weekend was filled with amazing activists, leaders, problem-solvers, and optimists. It was an unforgettable experience, and I encourage all of you to attend future conferences if you get the chance.

Hannah and actress Jada Pinkett-Smith, who is working on a Be Safe smartphone app (@BeSafeapp) that she hopes will become the “new 911.”

A major theme of CGI U 2013 was global inequality between men and women. Chelsea Clinton spoke about the lower numbers of women involved in STEM (science, technology, engineering, and math) and how this puts women at a disadvantage in our ever-evolving world. There were a variety of other speakers, such as Zainab Salbi (founder of Women for Women International) and Jada Pinkett-Smith (actress and activist), who talked about their commitments to promote fair treatment and end human trafficking. There was also an emphasis on the intersection of human rights and technology, and how we can use new tools to raise awareness about global issues. Technology is making the world a smaller place, and increasing our interdependence on one another. The co-founder of Twitter and CEO of Square, Jack Dorsey, put it best when he quoted William Gibson by saying, “The future has already arrived, it’s just not evenly distributed yet.”

To close, the Clinton Global Initiative University was truly a remarkable experience, and I think every attendee left with a renewed feeling of optimism and devotion to making the world a better place. Sometimes, we feel too young and inexperienced to make a difference, but this is a complete misperception. We have the time and energy to commit ourselves fully to our passions, and we need to seize the moment. As President Clinton told us this weekend, “If you lost a bunch of yesterdays, welcome to the human race. But you don’t have to give anybody your tomorrows.”

My commitment is to peace and human rights.

Thanks for reading,
Hannah Waller, UNH ’14

For more information about CGI U, Amnesty UNH, or anything else, contact me.

P.S. On the shuttle back to the hotel after closing ceremonies, I happened to sit by Brianna Hartford, a freshman at UNH who was also at CGI U! We’re considering forming a delegation for CGI U 2014, so please let me know if you are interested…

*The featured, top photo is of me and fellow Amnesty International intern, Hyobin Sung.