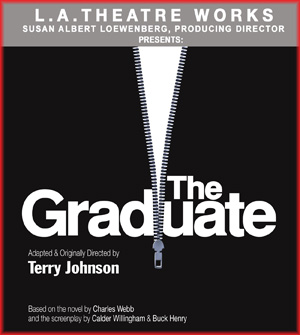 UNH Celebrity series will give you a chance to see some TV actors on Tuesday, Nov. 5th at 7pm. The Johnson theater in the PCAC will be hosting Los Angeles Theater Works’ production of The Graduate.

The Graduate was originally a novel by Charles Webb published in 1963. You may have seen the movie with Dustin Hoffman as the protagonist. The basic rundown is a college graduate named Ben Braddock gets seduced by the wife of a family friend. If the scandalous plot doesn’t grab you, how about a chance to see some minor characters from your favorite movies and TV shows in real life?

For starters, Brian Tichnell is going to be Benjamin Braddock. He’s been on Newsroom, Fetching, and Maron and will be featured on the forthcoming Silicon Valley

Let’s continue with the cougar character: Mrs. Robinson. She’ll be played by Heidi Dippold, who played Nina Ash in Angel. She was the older sister of Angel’s girlfriend. If you’re more a fan of crime dramas, she also played a woman who killed her husband on NCIS. Find her whole career here.

Tom Virtue is going to play Mr. Braddock. He was in Iron Man 3 as Thomas Richards! Remember Thomas Richards? But that’s not his only blockbuster, oh no- Virtue was also a Black Ops NASA technician in Transformers: Dark of the Moon.

Do you like Liar Liar, with Jim Carrey? Well Jim Carrey is not coming to UNH, but Matthew Arkin, who played a colleague of Jim’s in that movie will play Mr. Robinson. He’s also been in several episodes of Law & Order. Here he is, if you want to look for stuff you’ve seen him in.

Aside from a cast that has rubbed elbows with Iron Man, Optimus Prime, Angel, Jim Carrey, and the cops on Law & Order and NCIS, you also get to see a distinctive production of The Graduate. They’ll be performing as though this is an old-time radio play. If you’re an old radio buff you’ll get to see how the sonic landscape of a production would have been created. The actors won’t be moving around a set, they’ll be standing at microphones and there will be a sound effects man working at a table. It’s a forgotten art form in the TV age, but quite rewarding to witness. LATW has been getting rave reviews for their tour so far.

So get your tickets here if you like The Graduate, sound production, movies, TV, or theater history.