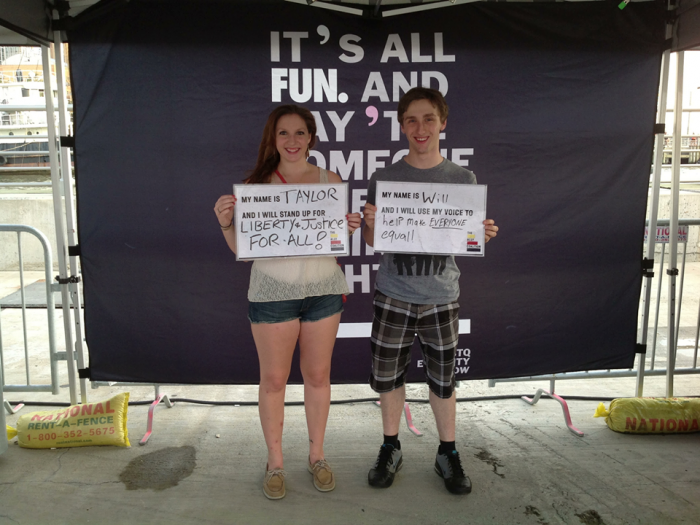 I have noticed a lot of things in my first semester at UNH. From how big the student body is, to how much better dining hall food is compared to high school cafeteria food, to how much colder it is here than home (even though home is less than an hour away). But, one thing that stood out to me significantly is the strong Ally population here at UNH. For those of you who do not know, an Ally is someone who, “supports equal civil rights, gender equality, LGBTQ social movements, and actively challenges homophobia and transphobia” (The Ally Coalition). From student groups to simple stickers saying “Ally,” it seems to me that there is a strong Ally population here in Durham, NH.

The issue of equality has been important to me for as long as I can remember. I live in the first state the legalized gay marriage in the United States, and the first gay couple married in Massachusetts just happened to be from my hometown. But, it wasn’t until the past few years that I became a strong supporter. Almost two years ago, my sister Taylor introduced me to the band, Fun. Most of you probably know this band from their biggest hits, “We Are Young” and “Some Nights.” Taylor has been a fan of theirs before they blew up and became world-famous, as they played at her school as they began to become popular.

My Sister and I at an Ally Coalition Event

Through my sister, I also found out about the band’s charity, The Ally Coalition. The mission of the charity is to raise awareness and support for LGBTQ causes through their allies, hence the name. The work with various other charities to help support their cause. Another thing they do is use their celebrity to forward their message. They use social media and they use their concerts to help gain supporters and members of their charity. One of the things members and supporters are recognized for is holding signs saying things like, “My Name is ___________ and I’m an Ally because_____________.”

Supporters take pictures of themselves holding the signs and post them on social media, which is where the majority of the Coalition’s voice is heard.

My sister has done a few events in conjunction with the Ally Coalition, and recently was invited to become an intern with the charity. She asked me for help with one of her projects, and I thought this would be a perfect chance to get UNH Allies involved! Because of the strong ally community I have seen, I’m inviting all who are interested to take part in this…  Attached are flyers from the Ally Coalition. Feel free to print them off, write down your message and take a picture of yourself holding the sign. You can send me your photos on Twitter to @WillLombard, and I will be sure to send them along!

For more information about the Ally Coalition, please visit www.TheAllyCoalition.org