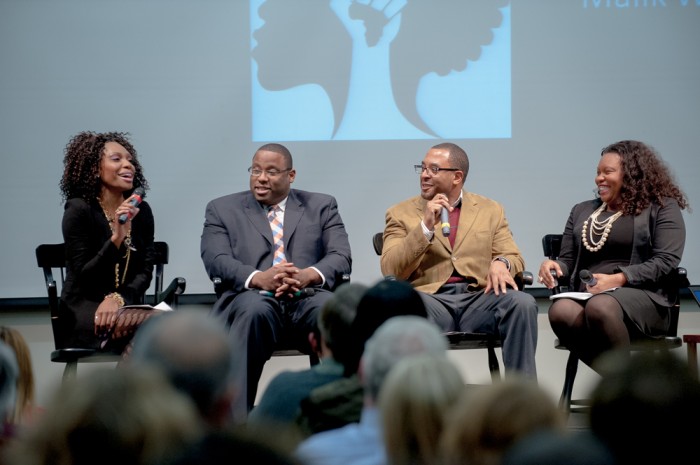 On Tuesday night two hundred people filled the Strafford Room to hear from four extraordinary UNH alumni. Shelly-Ann Richmond, Earlene Mends, Malik Aziz and Tito Jackson were all students at UNH in the late nineties, early 2000s and were leaders of the Black Student Union’s 1998 Sit-in in then-President Joan Leitzel’s office. We were gathered to recognize the 15 year anniversary of the sit-in, to celebrate these incredible individuals, to learn about their experiences, and to see just how far UNH has come on issues for students of color on campus.

The event was organized by Race and Ethnic Studies and the Black Student Union. It was a powerful and emotionally charged event that moved the entire audience.

The alumni began the evening discussing what the campus climate was like in the late 90s. They spoke about how isolating it was to be one of so few black students on campus, they told stories of experiencing overt racism about standing up to those injustices. All of those experiences led up to the fall of 1998 when they planned a sit-in to bring attention to the climate for black students on campus and demand that the University make changes.

Over sixty students walked into the President’s Office with bags of food and water and sat there for close to 16 hours. Malik Aziz who was the BSU President was their spokesperson, and he, Tito Jackson and Earlene Mends met throughout the sit-in with UNH administrators, including the President. At points during negotiations they walked away from the conference room because they felt administrators were not willing to make big enough commitments to change. They finally reached a compromise, resulting in a document listing eleven objectives for the University. (That document is below).

When comparing their demands with where the University is today, it is clear we have made strides, but we still don’t have 300 black students or ten tenure track black faculty members, which were both goals set to be met by 2004. The alumni shared how a strong commitment to diversity is good for everyone on campus.

All four alumni shared that they all have a deep love of UNH and are proud of the education they received and relationships they created while here. They spoke of the amazing leadership opportunity they had as students to organize and create change. But they also shared that they think the University could be doing more to support students of color. It was clear that these four alumni share a tight bond and are committed to continuing to help UNH further improve on issues of race and equity.

Later in the evening we heard from three current students about their experiences currently on campus. They spoke about their being less direct racism, and more subtle forms like micro-aggressions taking place. They shared that they could relate to a lot of what the alumni spoke about, especially being singled out or isolated due to being a student of color at a predominately white university. They advocated for mandatory staff and faculty training on social justice issues and working with underrepresented students.

Many people thanked the alumni for their courage and leadership, including Professor Carol Conaway who thanked them saying that she was the first fully tenured African American female professor at UNH and it was in part due to their activism.

It was an honor to meet these four alumni and to be a part of such an important event.

For more photos from the event, please visit: http://unh.me/ruT8Y