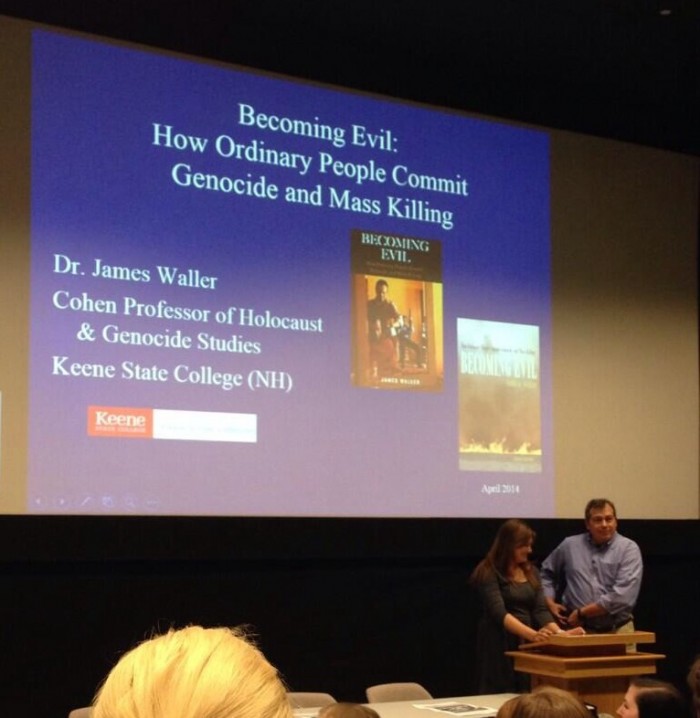 The cold and rainy weather didn’t stop students from making their way to the MUB Theater I for Dr. James Waller’s lecture. Dr. James Waller, a Cohen Professor of Holocaust and Genocide Studies at Keene State College in New Hampshire was speaking about themes from his book, Becoming Evil: How Ordinary People Commit Genocide and Mass Killing. When I first saw posters for this event I was immediately intrigued by such a topic. I wasn’t the only one either; at 7:55 with only 5 minutes before Dr. Waller took the podium, the theater was full with no standing room left.

Dr. Waller was introduced by his daughter, Hannah Waller, a UNH student. He immediately began talking about the history of genocide and mass killings. Included in this portion of the lecture was a shocking statistic – in the 20th century alone, it is estimated that 60 million people lost their lives due to genocides or mass killings. What’s even crazier is that Dr. Waller believes that is a conservative number.

“How many people did it take to kill 6 million people?” Dr. Waller, referring to the Holocaust, asked the room. There was silence. No one, not even Dr. Waller had an answer but what was interesting, is that the question was one that I hadn’t ever thought about. We focus on the victims, not the perpetrators, except when speaking of the evil that was done by them. The core of Dr. Waller’s lecture was perpetrators and how they are enlisted to perpetrate such evils.

The choices perpetrators faced, the emotions they felt, the coping mechanisms they used, and the changes they underwent, were all things that Dr. Waller’s work focuses on. He has interviewed both perpetrators and survivors to try and get some answers to those statements. The problem with this, however, is while speaking to the perpetrators, one may start to feel a sense of empathy towards them. The point of the lecture was not to feel empathetic, but to understand how the perpetrators of genocide and mass killings came to kill, as Dr. Waller pointed out.

Many people, including myself, would like to believe that perpetrators of such crimes are the complete opposite of us. Dr. Waller pointed out that, “it is ordinary people, like you and me, who commit genocide and mass killings.” This statement shifted the energy in the room. He went on to explain that while interviewing perpetrators, he is struck by how ordinary the perpetrators’ lives are outside of their “job” of killing each day.

Dr. Waller gave the example of the first set of Nuremburg trials. 21 men were tried and both IQ and personality tests were administered in attempts to try and prove these perpetrators had a “Nazi personality” (or some part of their personality that made them commit such atrocities). Scores from both tests came back and showed nothing out of the ordinary for all but a man named Julius Streicher. The other 20 men allegedly didn’t want to be tried with Streicher because they said he was “crazy.” “When a Nazi says you’re crazy, you’re pretty far gone,” joked Dr. Waller. This example illustrated to the audience that even Nazis (with the exception of Streicher) didn’t have something distinct about their personality that would explain their behavior during the Holocaust.

At this point I was wondering, as I’m sure many others were, what causes this behavior? I’ve read numerous works of nonfiction crime and many have cited certain psychological studies to back up the behavior of the crimes discussed. However, Dr. Waller explained that what makes perpetrators of genocide and mass killing different is the group dynamic. Any type of group amplifies a situation, either for bad or for good, Dr. Waller explained. Individual killers in these groups believe that killing itself is wrong but it is a worse wrong to not kill. That subtle difference may be the key element in what separates the mentality of “them” and “us.” Dr. Waller also pointed out that perpetrators have a very high sense of morality BUT their morality goes in the opposite direction of ours. For the perpetrator, the victim means nothing to them morally speaking, but for us, we will empathize for the victim and with the victim’s loved ones. Perpetrators are able to reconfigure their mindsets, justifying their actions.

Before opening the floor for questions, Dr. James Waller ended with the Arthur Ashe quote, “Start where you are. Use what you have. Do what you can.” Stopping genocide and mass killings may seem like an overwhelming task, but Dr. Waller urged the audience to follow the wise words of Arthur Ashe. This quote was an inspiring end to an extremely interesting lecture.