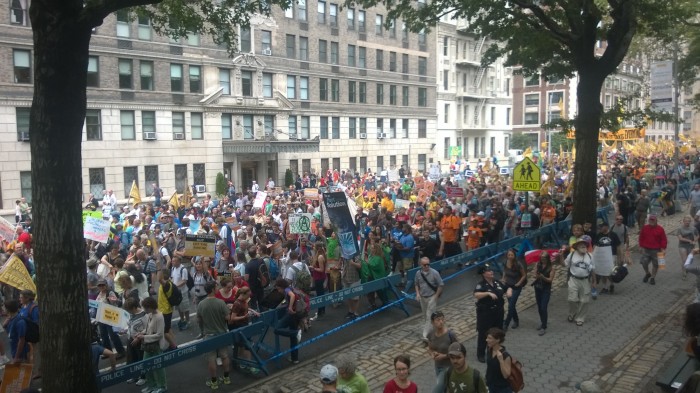 At 12:58 p.m. I listened to the silence, and then noticed the helicopter above my head- the same one that had been there for hours, but it wasn’t until we became still and silent that I noticed how loud the buzzing was. The gathering of people was enormous- voices, musical instruments, and chants froze in time as we held our intertwined hands in the air above us, and at last, with the emptiness created by the disappearance of the noise, we felt the strength and immensity of our presence.

It was a beautiful Sunday afternoon in downtown New York City. I, along with 40 other University of New Hampshire (UNH) students, gathered in the streets of the Big Apple for the largest climate march in history. The People’s Climate March, held on Sept 21, gathered an estimated 310,000-400,000 participants. People came together in support of world leaders meeting in NYC for the United Nations Climate Summit, in hopes of creating and implementatingof policies that will mitigate the damages produced by fossil fuel emissions.

The march gathered people for a multitude of reasons, and that was the beauty of it. There were those who came with stories of injustice for what has been done to them and their families through the destruction of our Earth. But despite these wrongs, they came with words of kindness and forgiveness. They came with hopes of creating a solution to the problem. They shared all of this, and together we created a community. A community built with meaning and purpose. Each person came to support change in a cause greater than the individual self.

UN Secretary-General Ban Ki-Moon and former Vice President Al Gore joined us in the march, along with Sens. Bernie Sanders (I-Vt.) and Charles Schumer (D-N.Y.), and environmentalists Bill McKibben, Jane Goodall, and Leonardo DiCaprio.  For hours we conversed, and voices chanted: “Hey hey ho ho, arctic drilling has got to go,” and, “We are unstoppable, another world is possible!” The streets were alive. And at 12:58 p.m, I heard the helicopter as we paused for two minutes of silence in commemoration of those affected directly by the extraction of fossil fuels and the depletion of our world’s natural resources.

At 1 p.m, we sounded the climate alarm and soon after, started to march. I introduced myself to those around me, and asked them what inspired them to be here today. Many women spoke of fear- fear that their children would live in poor health with inadequate food and water. More than 500 community affair officers watched over the march. One officer, Michelle Rodriguez said, “We support everybody, fair and impartial. This is a good cause.” One of the most interesting participants to attend the march may have been the nurses’ unions. Many members of the New York State Nurses’ Association (NYSNA) and National Nurses United (NNU) have experienced the direct effects of climate change felt through Hurricane Sandy. Nurses also see the direct connections in environmental and public health, in asthma and other respiratory illnesses.

When asked why college students were at the People’s Climate March, junior, Joao Carreiro replied, “I am here because it’s my responsibility to be here.” And senior Sarah Young responded, “It’s been too long with not enough being done.” Participants of the march, like the ones from the University of New Hampshire, hope to take this energy and bring it home, whether that be to their universities or hometowns.

This march was for the people. It was for morality and justice. The march was for those who know we need a change, and for the ones who are willing to listen. This is just the beginning, and we will not stop until the people have been heard.