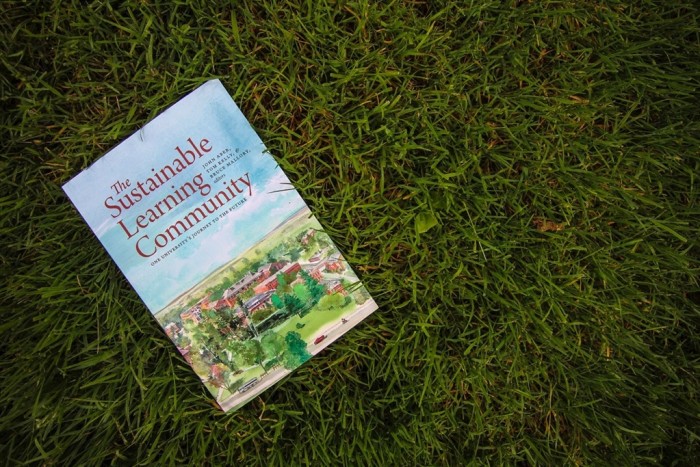 UNH is known for plenty of things. From T-Hall to the Whit, we’re a pretty recognizable campus. But what you may not know is that UNH is a innovator in sustainability. Even as an environmental scientist studying here at the university, I was surprised to learn about the extent of UNH’s incredible work in becoming a more sustainable university. At the university scale, UNH is at the forefront of sustainable action and policy, so check out a few of the many things UNH does to keep our world healthy!

Back in 2009, UNH started one of the most influential sustainable projects in its history. E

COLine is a pipe system that transfers methane gas generated at a landfill in Rochester to UNH to be used in electricity and heat production. A partnership was struck with Waste Management of New Hampshire Inc. to pipe the enriched and purified gas from the Rochester landfill all the way over to UNH. Not only was this groundbreaking, but it UNH became the first university to use landfill gas as it’s primary fuel source! At this point, ECOLine and the landfill gas ends up providing 85% of all campus energy at UNH.

If you take a right off of Main Street onto College Road, slightly off to your right you’ll see a giant smoke stack. Farther down, tucked back between the Service Building and Pettee Hall is the Combined Heat and Power Facility. In this building, methane gas from the aforementioned ECOLine is used to generate electricity. This electricity is then used to power the campus through more sustainable means. This isn’t all the plant does. As the name implies, it doesn’t just generate electrical power. In the process of generating the electricity, a huge amount of heat is created. Instead of cooling the plant and letting that heat go to waste, the plant is able to take this heat and use it in halls across campus to beat the chill!

UNH the first university to adopt landfill gas as its primary fuel source, but it is also home to the oldest office of sustainability in the country. Founded in 1997, the Sustainability Institute is led by Dr. Tom Kelly, one of the most respected leaders in the field of sustainability. The office, housed in Nesmith Hall, is a hub of everything sustainable. The Institute doesn’t just focus on recycling and energy use, however. Almost every office on campus has ties to the Sustainability Institute in one way or another. Some key partners include, Dining, Transit, Housing, and the Energy Office. Employing many nationally renowned full and part-time staff, as well as driven student interns, the office has long been a leading authority on sustainability in higher education.

Wildcat Transit is well-known for it’s crowded buses on the weekends and the unreliable transit app on the UNH Mobile App. However, even though it’s a pain that you have to wait that extra minute freaking out about where your bus is, using Wildcat Transit is one of the best ways individuals can le

ad a more sustainable life here at UNH. It’s not well known that UNH’s fleet of buses and cars is the biggest in the state of New Hampshire. Owned and operated by the university, the transit system is easily the largest in the state. Not only that, the fleet runs on biodiesel! These EcoCat buses and cars are some of the cleanest diesel vehicles on the road. What’s even better is that much of the biodiesel used by these buses comes from the byproducts of Dining Services and other UNH buildings! Using public transportation such as these buses is a great way for you to minimize your carbon footprint. And if you’re looking for transport to Boston or somewhere outside of Wildcat Transit’s broad reach, the Amtrak Downeaster stops into Durham ten times a day! So leave your car or moped behind and hop on a bus sometime!

UNH Dining isn’t just really good food that students can stuff their faces with on a daily basis. Working closely with the Sustainability Institute, Dining has developed into an inspirational sustainable operation. They’re proud to serv

e milk from our UNH’s organic dairy farm, produce raised in the student-operated organic garden, and apples right off the tree at UNH’s Woodman Farm. All the food waste that is produced every day is turned into compostable pulp. As mentioned in the Transit section, leftover oil is used for heating and biodiesel. Most notably perhaps is the annual Local Harvest Dinner hosted by UNH Dining. An entire dinner is created using local ingredients from apples to turkey. At the event, multiple tables are set up for diners to learn more about where the food is coming from and how they can help to support local agriculture! Dining Services also has begun an initiative that strives for less waste in the dining halls. Aptly named Take Less, Waste Less, the program encourages diners to take smaller quantities of food so that less is left on the plate at the end of the meal. One can always go back for seconds, so smaller portions is the way to go! They even have specialized ‘Wildcat Plates’ helping diners to take smaller portions with guidelines illustrating nutritional eating!

If you’ve been around UNH the past few years, there have been some incredible changes. Recently, there have been a few buildings on campus that have had some major work done on them. Not many students here now would ever know that Demeritt Hall, one of the oldest buildings on campus, was demolished and reconstructed in 2008. When that renovation happened though, 98% of all the rubble was recycled! That’s almost 2,500 tons of material

all recycled instead of being thrown into a landfill. Soon after, James Hall was renovated in a similar fashion in 2010. These renovations were reviewed by the U.S. Green Building Council’s Leadership in Energy & Environmental Design (LEED) program and received LEED Gold for James and LEED Silver for Demeritt. Another building was then given LEED Gold certification in 2013 when the Peter T. Paul College of Business and Economics was finished. But it doesn’t stop there. UNH, as you may have noticed, has always been at the forefront of sustainable action. In 2006, the university was the first in the country to receive the U.S. Environmental Protection Agency’s ENERGY STAR rating for residence halls Congreve, Lord, and McLaughlin. Only a year later, UNH was awarded five more for residence halls s Randall/Hitchcock, Sawyer, and Jessie Doe, for buildings P, Q and R of the Woodside Apartment Complex, and for administrative building Taylor Hall.

Every year, the president of UNH, along with his associates, build a Strategic Plan for the following academic year. This ‘master plan’ details what the university will focus on and what concepts and practices the university would like to see implemented, improved, and what the most emphasis will be placed on. In this years report, one of the six visions and values that UNH is focusing on is a “Commitment to Sustainability.” The plan highlights the fact that UNH is already world-renowned for its commitment to sustainability, yet UNH is still pushing the boundary of what a sustainable university can be! It’s heartening to see, in writing, such a strong commitment to such important topic.

If you click on the link directly above, you’ll understand when I say, this section could be it’s own article. The page you’re redirected to is a long list of awards that UNH has been given, typed in around size 9 or 10 font, because if it were any bigger, the page would go on for days. However, there are some that I wish to highlight along with awards I mentioned earlier. Probably most notably, the Association for the Advancement of Sustainability in Higher Education’s (AASHE) awarded UNH the Campus Sustainability Leadership Award in 2009. Soon after in 2011, the same organization’s STARS (Sustainability Tracking, Assessment & Rating System) program deemed UNH to be deserving of a Gold level status, ranking just below the highest level of Platinum. UNH was ranked in the top 15 of the Sierra Club’s Cool Schools, a salute to U.S. colleges that are helping solve climate problems and making significant efforts to operate sustainably. UNH has made the list since 2009. The Princeton Review, from 2008-2014, has recognized UNH on its Green Honor Roll, a review ranking the top schools in the field of sustainability. In its first issue in 2008, UNH was one of eleven schools to receive a top score! I could go on for pages about the recognition that UNH has received, but the list is too long. Be sure to check out some of the other awesome awards at the link above!

As you can see, UNH is at the front lines of sustainable innovation. If you wish to learn more about the many amazing projects or phenomenal offices mentioned in this article, feel free to click on any of the headers, they’ll lead you to even more info on the best of what UNH has to offer!