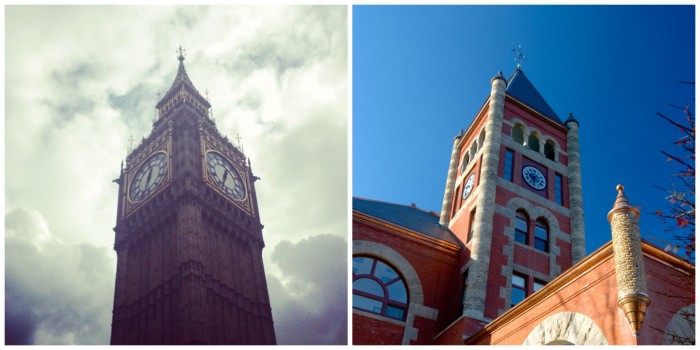 I have been really lucky in that my adjustment to life abroad has been pretty easy. From the moment I stepped off the plane at Heathrow, I fell in love with London. But Toto, we are not in Kansas anymore. There are a number of things that are much different here at the London School of Economics than at UNH, or London and Durham in general. Aside from the obvious, such as the British accents and driving on the opposite side of the road, I have come to experience a number of differences that a guidebook might not necessarily mention.

The first one would be the lack of iced coffee. Yes, I’m 100% serious. Whether it’s Dunkin Donuts, Starbucks, Aroma Joes, or Breaking New Grounds, students at UNH can sleep soundly knowing that their iced coffee of choice will always be there. In my totally unprofessional opinion, New Englanders seem to drink the most iced coffee in America year round. This is sadly not the case in London. While there are plenty of coffee shops to satisfy my daily caffeine intake, iced coffee options are few and far between. Sure, Starbucks will still make me an iced latte, but as any coffee aficionado will tell you, it’s not the same. My London friends have assured me that iced coffee makes an appearance in the summer months, so I will just have to wait until then.

Now that I have been in London for close to six months, I officially feel like a city girl. I can cross the street without panicking, navigate the escalator for the tube like a pro, and even hail a cab. However, ask me a year ago to do any of these things, and I would probably have balked at the suggestion. Definitely one of the biggest adjustments for me in this journey has been adjusting to city life. Don’t get me wrong, Durham is a great place to go to school, but I’ve never had to worry about a car stopping for pedestrians in NH like I do in the UK. The small-town charm of Durham, where, like Cheers, everyone knows your name, is not present in London. This is not to say people in London are rude; they just don’t want to know your life story, major, or if you know their cousin who also lived in Fairchild last semester.

I have never been the most athletically inclined (lack of hand-eye coordination). I can’t say that I religiously follow any of the major New England professional sports teams (sorry!). When it comes to UNH Hockey, however, I am a die-hard fan. I definitely miss cheering on the Wildcats in the Whitt. Sports teams at UK universities, on the other hand, do not have the same fan base. Sure, sports like cricket and football are a big deal, just not at the university level. You are much more likely to see LSE students in a pub cheering (or sneering) at the likes of David Beckham than attending an LSE rugby match.

A view from the top: the LSE Library

The educational system in the UK is also much different from that in the States. Students here specialize in what they are going to do for the rest of their life in high school. This means that, by the time they get to university, they are only taking courses that pertain to their major. I’m sure arguments could be made for both sides of the issue, but in my experience, the British students are really very knowledgeable in those subjects that they major in. It has certainly inspired me to be an even better student. Also, at LSE, there is very little coursework over the course of the year. I only go to class for 8 hours a week, and it is expected that you supplement this class time with independent work. Plus, the entirety of your grade rests on a three-hour final exam for each course in the summer. I have heard that, come summer, the library doubles as a sleeping, eating, and even showering area for all students.

It is true what they say; opposites do in fact attract. Being in London and at LSE is a totally different experience for me than my first two years in Durham at UNH were. That is what makes studying abroad so great. It is a chance to experience a completely foreign world with its own unique perspective. Then, when it’s over, you get to come back to a place that feels like home (my first stop will be BNG for some ICED pumpkin spice).

P.S.–Honorable mentions go out to Netflix (there is a huge debate over this), peanut butter (trust me, it tastes different), and the lack of Targets (you just don’t appreciate what you have until it’s gone).